One of the best reactions was this. | 22 Words 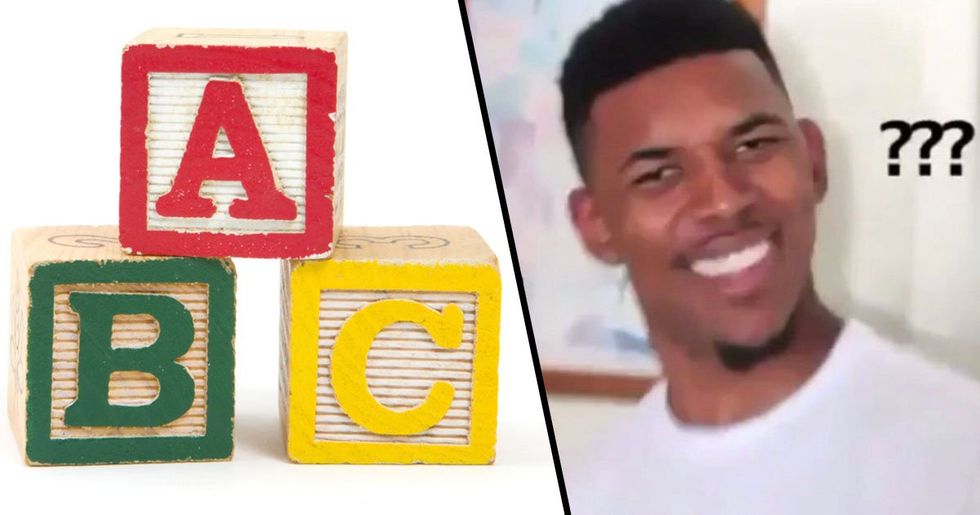 There's a New Version of the Alphabet Song to Clarify the 'LMNOP' Part, People Are Angry

One of the very first tunes we all learn all the words to has to be the alphabet song. And let's face it, it still slaps to this day. But the best part of it, without a shadow of a doubt, has to be the classic "lmnop" bit. You know the one - where everyone belts out a strange made-up word that sounds like "elemenopey."

But now, the Alphabet Council (or whoever is in charge of these things) has done a rejig. The new remix of the Alphabet Song has got rid of our favorite part - and the internet has some strong feelings.

One of the first things we ever learn is the alphabet.

Getting those pesky letters down is the first step towards essential life skills like reading and writing, after all.

And a classic way to get that alphabet learned?

Well, it would have to be that absolute tune, the Alphabet Song.

Where were you when you realized it shares the exact same tune as "Twinkle Twinkle"?

And there's one part of the song that's an undeniable highlight.

That cheeky "lmnop" part is everyone's favorite. If it's not yours, you're lying.

Something strange - and horrifying.

Because the best part of the song?

You can't just take letters out of the alphabet, after all. But that excellent song section is slowed down beyond all recognition.

Here's the song in all its (non)glory.

They changed the ABC song to clarify the LMNOP part, and it is life ruining. https://t.co/TnZL8VutnW
— Noah Garfinkel (@Noah Garfinkel)1572048848.0

It was brought to the internet's attention via Twitter.

And people aren't having it.

Many are refusing to accept this new version of the classic Alphabet Song.

One of the best reactions was this.

Others made this joke.

We have to hope this is all an elaborate rouse, right?

Why remove the literal best part of the tune? Make it make sense!

It's basically ruined the whole song.

What used to be a classic jive, has fallen far.

But for some, it was a pretty scary experience.

That moment where you realize the song isn't going to way you expect is weirdly scary.

Many have another fear.

Will this cause yet another generational divide?

There's one thing that unites us all.

@NoahGarfinkel My kids were convinced for years the letters were ELLEM and ENNO, as all good Americans should be
— Chris Rozon (@Chris Rozon)1572099464.0

Getting letters of the alphabet wrong is a key part of childhood.

And what if this happens?

@NoahGarfinkel If u gonna change the rhythm for the last part. change that shit for the first part. Now the next ge… https://t.co/1h5vIyg0ji
— youtube/Alonzo (@youtube/Alonzo)1572227440.0

Sure, we'll have a generation which knows all the letters - but will they be able to dance?

@NoahGarfinkel It worse than when singers do their own take and butcher the national anthem.
— 𝘾𝙝𝙪𝙘𝙠 (@𝘾𝙝𝙪𝙘𝙠)1572117818.0

Guys, if something ain't broke, don't fix it!

Although at least the internet has rediscovered this gem.

And look! Even Patti LaBelle sings "lmnop." If that ain't proof, we don't know what is.