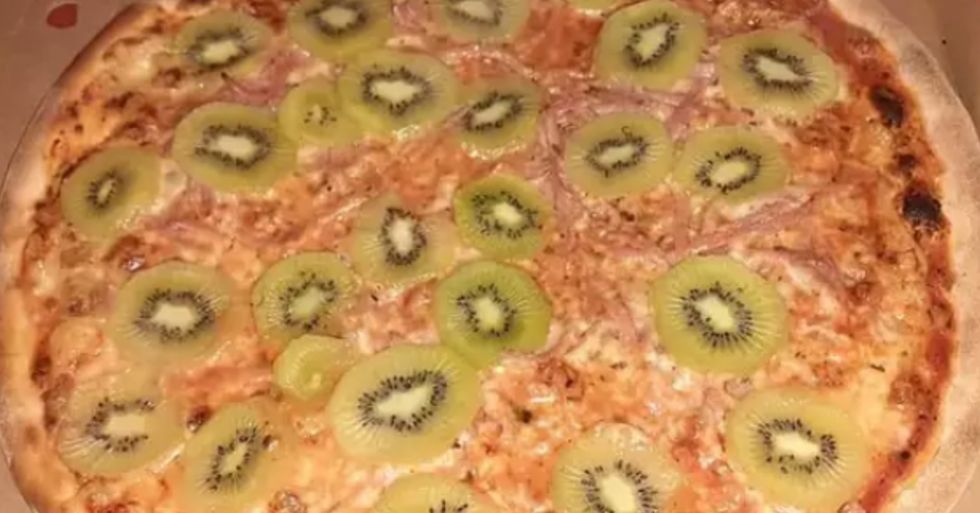 Does fruit belong on pizza? This question is responsible for almost half of the world's problems. Some people think it should be a federal crime to order a Hawaiian at a pizza parlor, while others openly discuss their fruity food habits.

This new story, however, will make you angry whether you agree with pineapple on pizza or not. A restaurant now has kiwi as a topping option. What on earth? And upon hearing the news, the internet has collectively decided they are going to cancel the entire thing.

Keep scrolling to see what else made it onto the Huffington Post list of worst toppings including the horrendous photo of the kiwi pizza.

Too much corn can really destroy a pizza.

Olives aren't even nice in salads, why would they be nice on a pizza?

Save them for buns please and nothing else.

On a similar note, spam should not be a topping option. End of discussion.

The cheese is the best part of a pizza and this is how you choose to ruin it? No. Just no.

I'm going to move on from this one. This is a joke.

We already have a whole other bunch of vegetables on pizza and now you want to put salad on it?

Or any cream base for that matter...

Including the legs. Yikes.

This is just plain wrong.

And the worst pizza topping has to go to the kiwi.

Who even came up with this combination?

I'll tell you who. A restaurant in Denmark.

It looks to have the typical base, tomato and cheese, it also looks to have a bit of ham on there but then the strangest part has to be the fruit on top: slices of kiwi.

The internet was not happy...

@hannahsbitton Pinapple on pizza is NORMAL and can be ordered Kiwi on pizza is an ABOMINATION and cannot be ordered
— marcey (@marcey)1579015614.0

This user referred to it as an "abomination."

And this user insinuated it made her feel sick.

I mean, I totally agree.

And this user may have let the secret slip...

But I'd unfollow you too if I saw that pizza on my timeline.

I don't want to point any fingers...

But it was the Danes.

And if you're in the mood to read more about food combinations that should not exist...

Then just keep scrolling. And please have a sick bucket at hand because some of these are worse than kiwi on pizza.