There's a Secret Compartment Hidden in the Butt of This Jesus Statue, and Its Contents Are Incredible | 22 Words 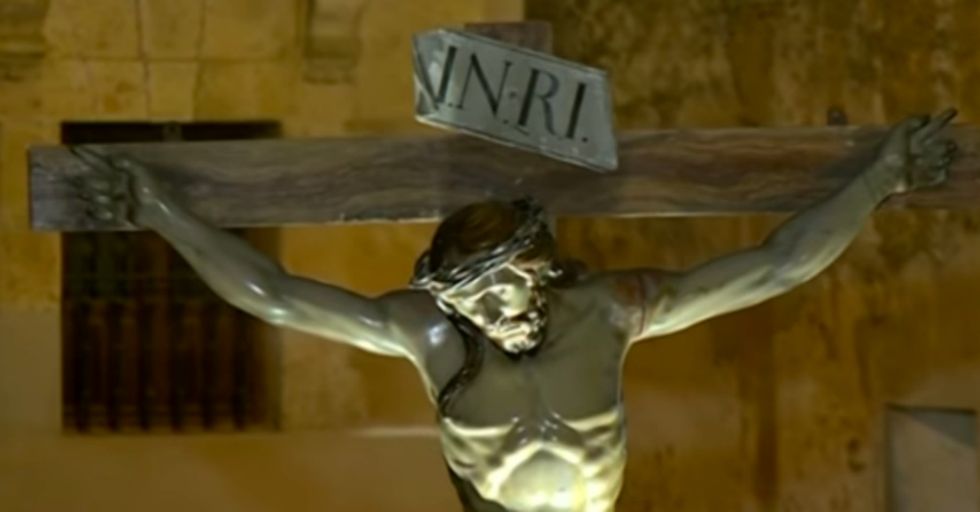 There's a Secret Compartment Hidden in the Butt of This Jesus Statue, and Its Contents Are Incredible

There are some truly incredible examples of art out there in the world. Even Britney Spears is breaking into the art world! That's magical enough, but we have something today that tops it. It's a statue that holds an amazing secret. No, it's not a phallic-looking piece of bread — we've covered that already.

It's a statue of Jesus.

And it's hiding an absolutely delightful secret.

Statues of Jesus are some of the most majestic pieces of art around.

Look at that! Look at the way the clouds form around Jesus' feet and the birds circle his divine self. There's only word for that, friends. Majestic. Like we said.

But this Jesus statue? It has something extra special about it.

It's the Cristo del Miserere and it usually resides in a church in northern Spain. Recently, it was taken down for restoration. That's when an amazing discovery was made.

No, it wasn't able to perform food-based miracles.

Although obviously, that would be pretty sweet. It wasn't a miracle of food, but a miracle of the butt. A butt miracle, if you will.

Workers noticed that there was a special hidden compartment in Jesus' butt.

Yes! Seriously! This is real life. There's a statue of Jesus in Spain, and it has a secret butt compartment!

Here you can see the workers removing the lid of the Butt of Christ:

There it goes. Did you think you were going to see Jesus' butt removed before your very eyes today? We're betting you didn't. But you did! Because it's 2017 and anything can happen.

Located within the compartment was a letter written in the year 1777.

A chaplain from the Cathedral of Burgo de Osma named Joaquín Mínguez wrote the letter, which discussed what life was like in Spain during the 18th century. Mínguez described popular games that were played, the main crops of the land, and the diseases plaguing the people.

The letter has been sent to the current archbishop.

However, a copy has been made of it and placed back in the secret Jesus Butt Compartment. Just as He would have wanted.

Obviously, people are thrilled by this Butt News.

How could you not be? It's absolutely delightful. Now we kinda want to crack open the butt of every Jesus statue in the world. Just in case.

And you have to admit: It's a nice switch from some of the stories that usually fill your newsfeed.

The world may be bad, but there's a secret butt compartment in a statue of Jesus Christ. That makes up for a lot, right?

Anyway, keep it classy out there.

We feel like Jesus would be thrilled by this turn of events. He must've known we'd need something like this to get us through the end of 2017.