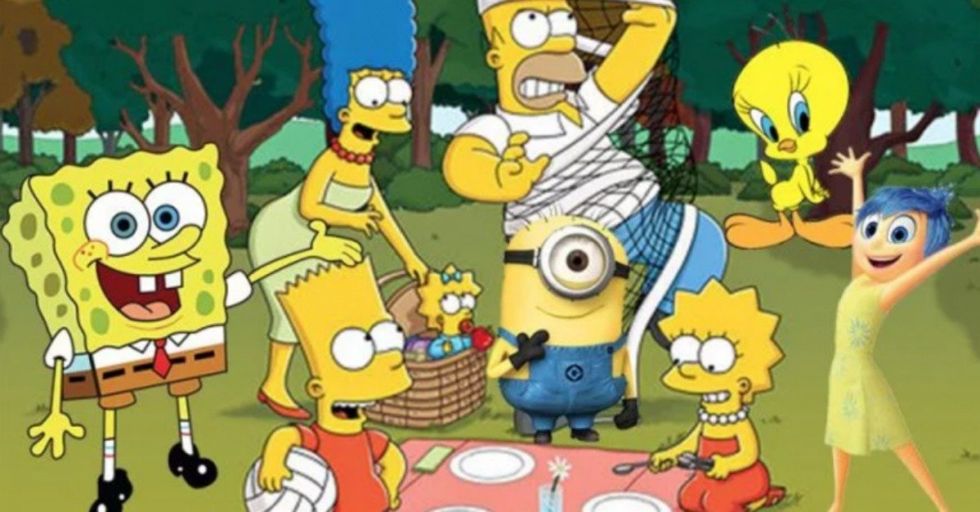 You probably don't give a whole lot of thought to why your favorite cartoon characters look the way they do. But would Marge Simpson be Marge Simpson without the huge blue beehive? Would Minnie Mouse be the same without that polka dot bow?

One thing you might have noticed — and that you won't be able to not notice from now on — is that a lot of popular cartoon characters are yellow.

They rarely have a neutral skin tone, and are often drawn to have all manner of primary colors as their skin tone, even when they’re meant to be humanoid (with a bad case of jaundice). There's a method to the cartooning madness though — everything is by design — and there's actually a really interesting reason for the yellow hue.

Thankfully YouTube Channel Frederator breaks it all down, and it starts with the color wheel.

One of the easiest ways of making a cartoon character visually distinctive is to use complimentary colors that are appealing and stand out, but don’t clash with one another.

This is why blue and yellow are used prominently for the main characters in cartoons like SpongeBob SquarePants and The Simpsons.

The background on a lot of cartoons tends to be blue because they take place outside with blue sky, so the color yellow helps them to stand out. It’s also a bright a clear color, so it doesn’t distract the audience or obscure things like facial features.

There's another reason for the color choices, and that would be psychology.

Blue and yellow are visually comforting, while colors like orange and purple or red and green tend to clash. That’s why in the slasher horror movie A Nightmare on Elm Street, killer Freddy Kruger wears a red and green striped sweater: it’s visually distressing on a psychological level.

Check it out for yourself.