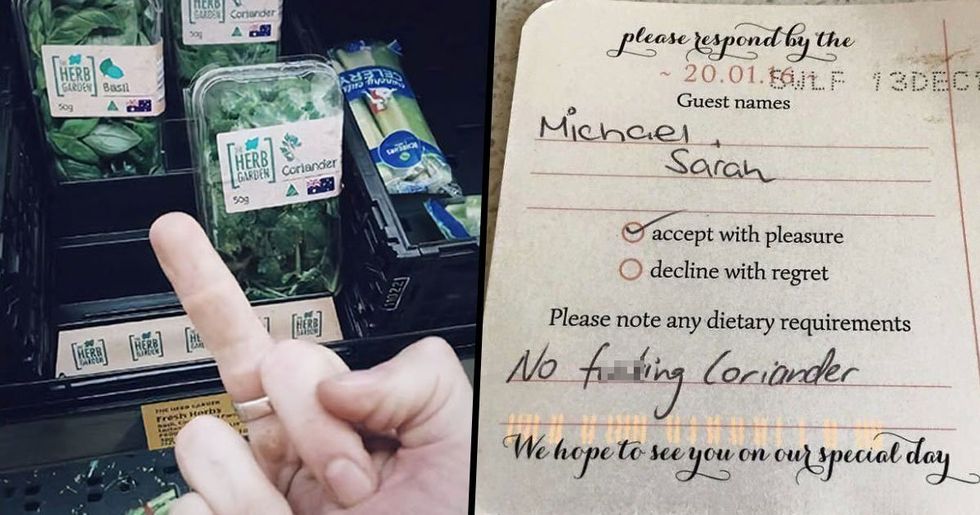 If there's one food that divides the entire population, it's cilantro.

To some, it's a distinctive flavor that takes any dish from bland to delicious. But to others, it's a truly disgusting, soapy tasting concoction that can ruin any good meal. Apparently, it comes down to genetics, but either way, it's one of the most divisive issues online - and there's now a Facebook group to prove it.

I Hate Coriander is the internet's premier destination for cilantro-haters. It's filled with hilarious posts taking down the controversial herb and has become so popular that you can even buy merch for the (oddly specific) distaste. We've picked the thirty funniest memes from the group for your scrolling pleasure. Enjoy!

Some memes depict the relief of avoiding the dreaded herb.

Sometimes, living life hating cilantro can feel as though you're constantly on edge - which can really bring about moments of sweet relief.

The day to day struggles.

Ordering food without cilantro can be tricky - especially since often people don't appreciate the seriousness of your request.

It's all too easy for the request to go ignored.

And when you find out that your food has been contaminated, there's really no coming back from that.

Unless this is a bit of clever editing, it seems like some feel so strongly about their cilantro stance that they can't help but spread the word.

The page is also a valuable source of knowledge.

It goes some way in explaining exactly why people have such conflicting views on the flavor.

Cilantro has a relative who looks alarmingly similar.

And it seems that parsley can often lull cilantro-haters into a false sense of security, tricking them into ingesting some of their least favorite herb.

Although this one is a twist on the usual giant-pupil image - because these people hate cilantro, get it?

Others depict some pretty hilarious interactions.

For example this one - which attempted to get the supposed evil of cilantro announced as a common truth.

Because there's one thing that cilantro-haters can all agree on...

The most evil thing about the taste is how it seems to permeate perfectly good foods and ruin the whole meal.

Some mocked those with differing opinions.

If there's one dividing line that's drawn, it's between the cilantro-haters and the cilantro-lovers of the world.

This one of a suicidal Pepe may seem like an extreme reaction to cilantro - but it appears that many can relate.

Many members of the group think that the herb has some level of autonomy, and goes out into the world personally targeting its enemies.

Maybe they have family members who disagree with their point of view.

But for these "cilantrophobes," burning down a house is a totally reasonable reaction to exposure to the nasty stuff.

Some have dedicated their lives to spreading the message.

One member of the group decided to use this candle display as a means to spread their word.

It's clear that members are serious.

One even decided that their cilantro stance was so important that it was worth getting it permanently tattooed onto their body, in a pretty serious tribute.

It seems like some are very serious about the issue.

Writing to the government seems like a pretty obvious response to what many view as a public danger.

Some find instances of cilantro hatred in the wild.

This image of reduced price cilantro is pointed out as evidence of how terrible the flavor actually is.

After all, if they can do anything to spread the word about the evils of cilantro, why would they not?

And some are in positions of power, which they can manipulate to spread their opinion.

For group members, their hatred acts as a great unifier.

In a world wherein disagreements on complex issues are the norm, it's excellent to find an issue that everyone can agree on - at least, in this specific corner of the internet.

Some posts rely on rather unflattering comparisons.

Sure, you may hate cilantro - but to comparing it to feces does seem a little extreme.

The group is also used to mock those with a different point of view.

If there's one thing that cilantro-haters dislike more than cilantro, it's cilantro-lovers - and there's no escaping their wrath.

Some just have an immediate reaction to seeing the herb.

For those who feel so strongly about cilantro, it's almost impossible to see it out in the wild and resist reacting.

Some have even dressed up as their enemy.

Note the barcode on this cilantro packet, which simply reads "Devil Weed." It's really all about the details, people!

After all, if you want to dedicate your life to a cause, that's a valuable thing - even if the cause does seem a little silly to some.

Some of the pictures are pretty simple.

Although we have to say, we don't think that a dislike of cilantro is reason enough to throw it down the toilet. Think of the plumbing!

Some combined cilantro with another of the world's greatest evils.

Some commented that this photo is perhaps one of the most cursed images on the internet.

Although, we have to say, we love this minimal typed one - especially when juxtaposed alongside other, more intricate, images.

Some admit that their cilantro hatred may be holding them back.

But at least group members can admit that they have a huge bias against any food that includes their hated flavor.

This is one of our favorites.

Maybe Gandhi said it, maybe he didn't - but the image of the inspirational guy alongside a cilantro-hating message is very funny.