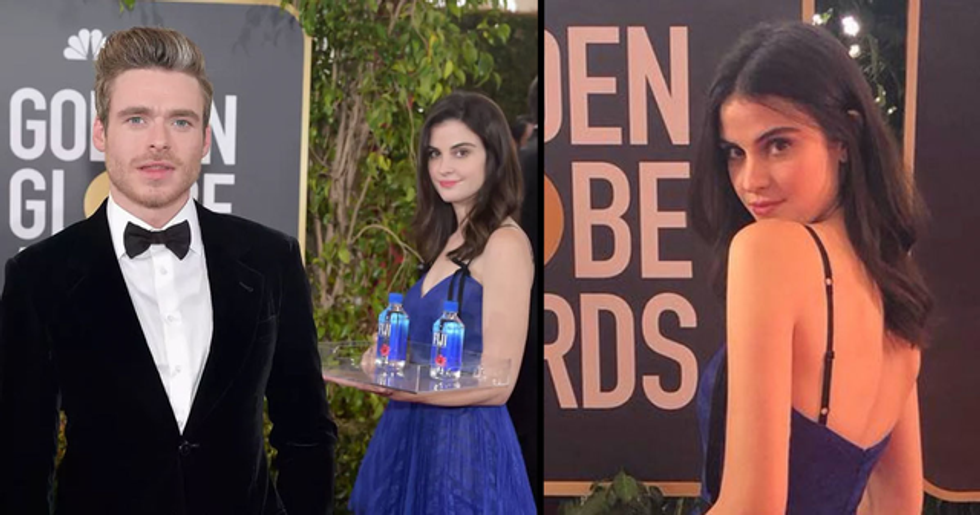 There are many great stories coming from the Golden Globes this weekend. From Jim Carrey getting "kicked out" of his seat, to Melissa McCarthy smuggling in over thirty ham sandwiches, Hollywood's elite certainly didn't disappoint with their crazy antics. But one story has stood out among the rest - and, strangely enough, it didn't involve any celebrities at all.

Potentially the biggest story of the entire event revolved around a woman handing out bottled water on the red carpet. Dubbed "FIJI Girl," the woman appears in the background of a huge number of the snaps from the event. She's brandishing a tray of the iconic water bottle, and almost looks as if she's stumbled upon the event by accident.

Funny as these images are, people have started to question the publicity stunt. There may be a darker side to this meme than we initially realised.

This weekend marked the start of awards season.

The Golden Globes were held on Sunday, to celebrate the year's achievements in film and television.

Other winners included Olivia Colman for The Favourite, Sandra Oh for Killing Eve, and Richard Madden for Bodyguard.

But for eagle eyed viewers, the winners weren't such a huge part of the story.

Very quickly people started to notice something weird going on on the red carpet.

The biggest star on the red carpet?

Well, it seemed to be a lowly bottle of water.

Well, not too lowly.

FIJI claims to be the best of the best in terms of bottled water, thanks to the mineral blend. It supposedly gives the water its signature smooth feel and gentle, soft flavour. The iconic bottle helps, too.

A woman, termed "FIJI Water Girl" by the internet, seems ever-present in almost every pic.

The server was posing as well as the stars.

This woman isn't nominated for anything, she's just holding FIJI Water for the celebs on the red carpet whilst milk… https://t.co/qmbazgs5yl
— British GLAMOUR (@British GLAMOUR)1546819735.0

In fact, she's basically stealing the limelight in every shot she's in.

Page Six even termed her the MVP of the event.

Here she is stealing the shot behind actress Camilla Belle. We have to hand it to her, she knows how to work the camera.

The first couple of times you see her, it's funny. But when you start to notice she's basically in every single shot of the red carpet, it's almost unbelievable.

In fact, social media thought FIJI Water Girl was the real winner of the awards ceremony.

A woman serving Fiji Water to the attendees has been crowned the winner of the red carpet at the #GoldenGlobes by s… https://t.co/n21rfFkfZx
— Los Angeles Times (@Los Angeles Times)1546825784.0

For someone doing a boring, service job, she truly knew how to milk the event to its maximum potential!

The images are pretty funny.

There's something about the way the girl looms over celebrities shoulders, while maintaining an almost spooky, deadpan eye contact with the camera that just tickles the funny bone.

As you may already have guessed, this "waitress" isn't really a waitress at all.

Internet sleuths quickly tracked the girl down, and found out she's a professional model. Her name is Kelleth Cuthbert.

Here she is posing on the red carpet.

The girl is omnipresent in red carpet photos.

Her she poses behind Amy Adams and Darren Le Gallo.

She really worked hard to make her presence felt.

She's posing just as hard as Holly Taylor, star of television's The Americans.

Her extreme meme-ability. There images of an ominous stare to the camera going on behind a celebrated event apply to many recognisable life situations.

This is one of our faves.

There is an absolute ton of FIJI Water related meme content online for you to enjoy.

But there may be a darker side to all this hilarity.

It's important to remember that FIJI Water is a company, with a bottom line. The entire set up of the FIJI Water Girl is essentially a publicity stunt.

Their Twitter feed is currently bursting with fresh memes and jokes about their viral fame.

According to The Cut, Cuthbert knew exactly what she was doing while posing for these photos. "It's calculated," she admitted.

Vox have explored the dark side of this meme phenomenon.

Fiji Water is part of an industry built on extreme wastefulness and manufactured demand — one leaving a potentially… https://t.co/a6SDcswdLx
— Vox (@Vox)1546917302.0

We highly recommend a read of their article on the myriad of issues with FIJI water as a company.

For one thing, the company has a dodgy tax history.

Their location of FIJI gave the company a tax-haven status. "FIJI Water has tried to present a positive public face," says author Aja Romano. "But it may be a mask." And what better mask than a funny, pretty, internet-friendly girl?

And that's not even getting started on the ecological impacts.

The celebration of this weird and wonderful internet phenomenon may just be us giving a more fun, palatable face to corporate greed.

Could this be the most pernicious ad campaign ever?

I've been thinking about Fiji water girl -- specifically about how we as a culture often mindlessly accept a narrat… https://t.co/egaTM4PGY3
— jeremy (@jeremy)1546884256.0

When huge multinational corporations are involved, it's absolutely essential to question motives before jumping in feet first. Check this out for more detailed info.

After all, FIJI Water were sponsoring the entire event.

The Vox piece points out something inherently worrying about our culture.

We're so quick to jump into "meme culture," that we often just don't think about the cultural implications of our actions.

Although we shouldn't feel too guilty.

In conclusion: are we bad people for sharing the Fiji water girl photos? No. I am just sending out a friendly remi… https://t.co/xfybyLkqCK
— jeremy (@jeremy)1546889623.0

This was a calculated move thought up by some of the biggest brains at an enormous company. It was specifically designed for us to immediately begin meme-ing - so it's no wonder that that's exactly what happened.

2019's meme year has got off to a really intriguing start.

Perhaps this will be the year where meme culture implodes on itself? At the very least, we look forward to some more cognisant, interrogative and disruptive memes in the coming year. FIJI Water Girl has prompted a fascinating conversation, and we look forward to seeing what comes next!