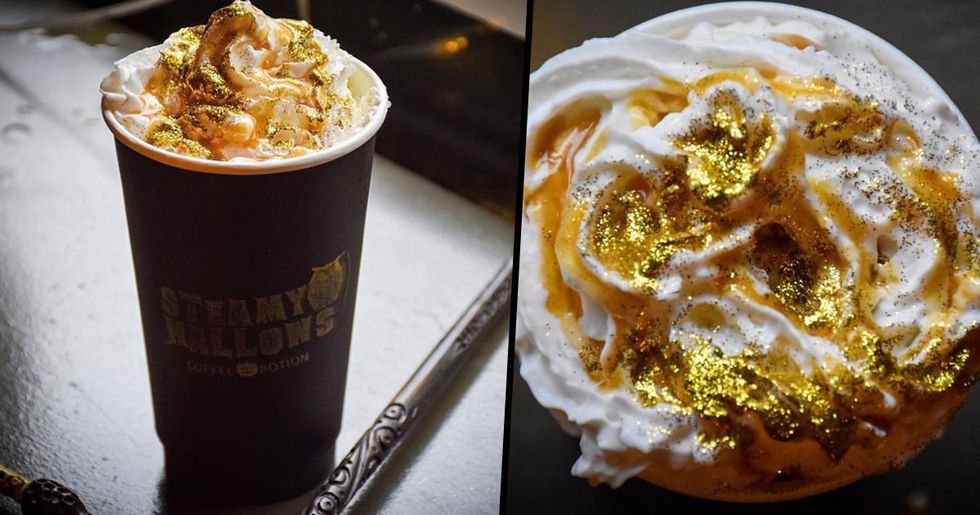 The Harry Potter fanbase is probably the most prevalent of its kind. Fans of all ages flood Comicon every year dressed head to toe as their favorite Hogwarts students - and that's just the start of it. It's undoubtedly a hugely successful franchise - it's got its own Wizarding World amusement park in Orlando, endless merchandise, and even its own Warner Bros tour of the actual set, to name just a few things.

There's pretty much nothing that hasn't been done in celebration of the franchise.

But, now, it looks like Harry Potter fans had better head down to New York City as a pop-up cafe inspired by the fantasy series has recently opened its doors.

Since it opened, fans of the magical saga have been flooding to the cafe to get their fix from the Wizarding World-inspired menu, but there's one recipe in particular that people are rushing to get their hands on - and we have to say, it looks pretty amazing...

Themed cafes seem to be the latest craze when it comes to our favorite franchises.

Over the years, several TV-themed cafes and restaurants have graced cities all over the world - we've had a Cheers pub in Boston, a Breaking Bad coffee roastery in Istanbul, and, of course, a Friends-themed "Central Perk" cafe that made an appearance in Toronto.

There's even been a Saved by the Bell-inspired pop-up restaurant.

"Saved by the Max," based in West Hollywood, is a replica of the gang’s favorite diner.

And, now, it seems like another popular franchise has picked up on the trend.

Harry Potter fans will be pleased to hear that the fantasy franchise is the latest to hop onto the craze.

Based in New York's East Village neighborhood, Steamy Hallows opened its doors to muggles and wizards alike in February, and the menu is just as magical as we hoped.

We first got a flavor of what we were in store for at the themed cafe after this photo surfaced...

The Steamy Hallows team got anticipation brewing after sharing a snap of their custom coffee cups on their Instagram page shortly before they officially opened.

The decor is just as mystical as we imagined...

Complete with bubbling cauldrons, witchy wall decor resembling that of "the great hall," and broomsticks (anyone want a game of Quidditch?), it's every Harry Potter fan's dream.

Unsurprisingly, Steamy Hallows has quickly become a hit with fans.

Fans have been grabbing their Hogwarts uniforms and flooding to the cafe, taking to Instagram to document their magical coffee pit-stop.

And we don't blame them - it's pretty Instagrammable.

One click on the Steamy Hallows Instagram page showcases the sheer popularity of the pop-up cafe. It seems rude to go there and not take a snap to mark the occasion...

It's not just the interior that's enticing fans in, the menu looks amazing, too.

From an array of classic coffees, tea potions, and homemade cookies, the cafe has received praise for its Harry Potter-themed menu.

There's even a children's menu.

It's not just adult witches, wizards, and muggles that are getting in on the spooky fun, kids can pick off a menu of their very own too. The children's menu features kid-friendly portions of the drinks (or "potions" as the cafe likes to call them).

The names of the drinks are equally as witch-like, too, and we can't get enough.

Ranging between $3 to $8, the names of the drinks alone are enough to make you want to try one for yourself. There's the "Basic Witch" coffee - a blend of a shot of espresso, caramel syrup, sea salt, and milk topped with sea salt - and the "Focus Potion," made from chai tea, turmeric, and your choice of milk topped with cinnamon powder... perfect for anyone trying to tackle finals.

Time to delete Tinder, because there's even a "love" potion...

Yes, really. The love potion is a special blend of a shot of espresso, mocha syrup, rose water, your choice of milk, and red sugar - when made using the right amount of each ingredient, it can make anyone fall in love with you. But, be warned, made in the wrong proportions, it can do quite the opposite... making people fall out of love with you. We're sure that the baristas know how to cook up the potions just right...

Those wanting a more low-key beverage are covered too.

Steamy Hallows also offers plain and simple lattes, espressos, hot chocolates, and herbal teas for the less adventurous among us.

But, there's one recipe in particular that fans have been going crazy for.

That's right... glittery Butterbeer. The cult classic drink regularly features in the Harry Potter franchise and has quickly become the cafe's most popular drink - with fans eager to get their hands on their very own.

Here's what the fan-favorite drink is made from.

The "Butterbeer Latte" is made from a shot of espresso, butterscotch syrup, vanilla syrup, and your choice of milk topped with whipped cream and caramel drizzle. It honestly sounds like any fan's dream.

There's even butterbeer cookies for those really wanting to go all out...

Fans of the butterscotch-esque flavor will be delighted to know that you can also buy a butterbeer cookie to go with your drink.

There is a Harry Potter-themed coffee shop on 6th street called Steamy Hallows, and I would protect its sparkly, wa… https://t.co/FNespKekev
— Jenni Miller (@Jenni Miller)1556919303.0

Fans can't seem to get enough of the wizarding magic.

Harry Potter fans all over the world are now calling for a Steamy Hallows in their city.

Muggles and Witches! Why is there not a Steamy Hallows in Melbourne? I need some glitter butter beer 😜 have a look… https://t.co/PXA69FCwQI
— Charly McCafferty (@Charly McCafferty)1560216012.0

This fan wanted the Hogwarts-themed cafe to open in Melbourne.

So, how long will the pop-up cafe be around for?

At the moment it's unclear how long Steamy Hallows will remain open, so we suggest that you grab your wand and spellbook and head down to grab your very own potion while you still can!