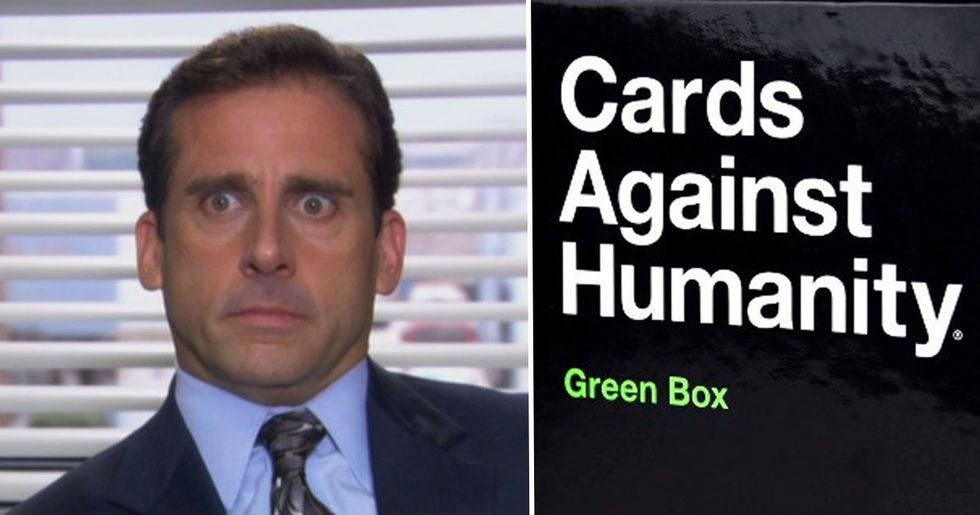 Released in 2011, Cards Against Humanity has long been a favourite for those who enjoy borderline offensive party games. If you've never heard of it, essentially you fill in the blanks of a statement to create an answer which gets the most laughs (or cringes) from those who you're playing with. While it's not a great choice to play at a family party, with the right crowd it can be pretty hilarious.

Since its inception, Cards Against Humanity has offered a myriad of expansion packs, designed to help boost or even personalise your game-playing experience. And now an Etsy store is offering a Cards Against Humanity pack inspired by everyone's favourite fictional paper company - Dunder Mifflin. For those not in the know, that refers to the much-loved NBC sitcom The Office. Fans of the show will absolutely love the inside jokes the cards offer. Plus, since the show ended in 2013, these cards provide a much-needed trip down memory lane.

If you're a fan of party games, it's likely you'll have heard of Cards Against Humanity.

The game, launched in May 2011, is designed to be an attack on political correctness. The more offensive and shocking your answer, the better.

Here are a selection of the classic cards.

When playing, the dealer reveals a black card. All players must then select one of their white cards which gives the sentence the funniest, more outrageous meaning.

Results can be pretty hilarious.

Sometimes the way the cards get dealt can almost seem determined by fate, the results they give are so perfect.

Some can be hit a little closer to home.

As the name of the game suggests, this may not be the best one to play if you're a little more of a sensitive soul.

Although sometimes things don't go according to plan.

It's a terrible disappointment when you're eagerly anticipating the big laughs your answer is going to get, only for the dealer to read yours out and be met with... total silence.

Even so, the game is a very fun way to pass the time.

Although perhaps it's best avoided if you're playing with someone who's easily offended. Offence, if you hadn't already guessed is basically the name of the game here.

It was on from 2005 to 2013, and is still available on a variety of streaming sites. This means, even though it has ended, it's never really left the cultural zeitgeist.

Anyway, enough of the trip down memory lane.

The Office Has Its Own Cards Against Humanity Expansion Pack And We Need It Now https://t.co/9WVEptBgZX
— Mikhail (@Mikhail)1546911562.0

Some very exciting news has broken which has brought The Office back onto our radar. A Cards Against Humanity / The Office crossover is happening thanks to one ingenious Etsy store owner.

People were pretty excited by the news.

New Office content after all these years? In an interactive form? With bonus offensive humour? Where do we sign up?

We can't wait to get our hands on the set.

You can buy either physical cards, or printable downloadable versions. The set contains 36 black cards and 144 white cards, and though it isn't official merch, it's made by a dedicated fan who really knows their stuff.

The set is called Cards Against The Office.

It was created by Etsy user CATOOfficialShop, and the product has a 4.5 star rating based on 34 customer reviews at the time of writing.

According to one review, it's definitely worth a purchase.

Lovin' Turks and Caicos  say the set contains references to all your favourite The Office storylines, including Michael going bankrupt, and Jim's iconic Jell-O prank on Dwight.

We can't wait to play.

If Cards Against Humanity is funny, and The Office is funny, then the two combined must be funny, right?

We're so curious as to what other Office storylines the set includes.

We've got our finger's crossed that there's a reference to Michael, Dwight and Andy's short-lived love affair with parkour.

Or perhaps one of the disastrous office Christmas parties.

There's one Christmas episode in almost every series of The Office, each more excruciating yet hysterical than the last.

There's only one problem.

The set is currently sold out on the Etsy store. What are we supposed to do now??

Well, the only thing we can do.

Patiently wait, refreshing the page once in a while, until the set is back up and available for purchase. Here's an accurate depiction of what that moment will be like.

Here are some of our favourite cards.

Alongside the Etsy Store, we've tracked them down for US shoppers at Giraffe King Games. This selection of jokes about everyone's favourite Assistant (to the) Regional Manager certainly brought a smile to our faces.

As did these answers.

The Michael / Toby "relationship" (or lack thereof) is one of the longest-running Office gags. Plus, any reference to Meredith's casual Friday outfit is basically a guaranteed laugh.

Here are a selection of the white, "answer" cards.

Some of them even contain pictures - like Kevin's infamous chilli spill, or that cringe-inducing to the point of unwatchable moment when Toby absent-mindedly gropes Pam's knee. We're getting shivers just thinking about it.

Here are some of the black, "prompt" cards.

What's particularly great about the set is that it encapsulates great moments across the show's nine seasons. The Jim-jello prank is from (believe it or not) the very first episode.

We also noticed something pretty exciting on the site.

There's a dedicated page for your own card suggestions! That way, if the set is missing your personal favourite Office moment, you can get in contact with the card's creators directly. This basically means the possibilities for this game actually are endless.