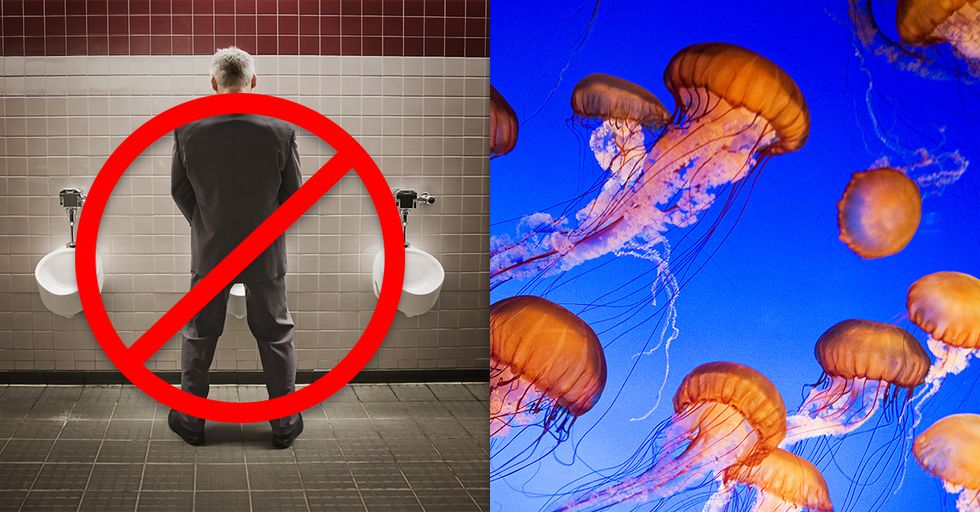 Everyone and their mothers have accepted some beliefs about the human body that have turned out to be just plain wrong. Though these myths have been proven wrong, they are still widely believed by many — maybe even you.

For example, do you think you're special because your fingerprints are yours and yours alone? Well, think again! You're not special at all! At least not because of your fingerprints. We're sure you're very special in other ways.

1. Shaving your body hair makes it grow back thicker.

This is completely false, a myth perpetuated by Big Body Wax in order to get you to stop buying razors. OK, that's not true, but it really is a myth that your hair grows back thicker if you shave it. In fact, there were studies done way back in 1928 that showed that shaving had no effect on hair growth. So there! Shave away.

2. Peeing on a jellyfish sting will alleviate the pain.

It might have worked for Joey in an episode of "Friends," but no — urinating on a jellyfish sting does not alleviate the pain. Instead, the area where the person was stung should be rinsed with vinegar (go figure!). If vinegar is not available, use salt water. In tests, urine had the ability to cause active stinging cells to fire, which means urinating on a sting could actually make it worse.

3. You can catch a cold just from being outside in wet or cold weather.

When your mother insists you wear a jacket or else you'll catch a cold, now you can tell her she's wrong. Mark Leyner and Dr. Billy Goldberg, the authors of  the book "Why Do Men Have Nipples?," explain, "Cold or wet weather does not cause a cold ... The common cold is caused by a virus. These viruses are everywhere and it is difficult to avoid them." So there you have it: The cold will not give you a cold.

4. Most of your body heat is emitted through your head.

Your mom probably also always told you to wear a hat because your head is where most of your body's heat escapes from. Well, that's wrong, too! Mom, seriously. Get your facts straight. A recent study suggests that your head doesn't give off any more heat than the rest of your body. So wear a hat if you want to or if it looks adorable, but it won't keep your body any warmer than the best of your body.

5. You can cure a snake bite by sucking out the poison.

Whatever you do, don't suck the snake poison out of your friend's leg! It can lead to an infection at the site of the wound because your mouth is a dirty, dirty place. Instead, the Red Cross suggests that in the event of a snake bite, you wash it with soap and water and apply a bandage. Then immobilize the bitten area and keep it lower than your heart. And last but not least, get medical help.

6. It's dangerous to wake up a sleepwalker.

Sure, your sleepwalking friend might get startled when you wake them up, but that doesn't mean it's actually dangerous for you to do so. In fact, it's probably more dangerous if you notice them sleepwalking and don't wake them up. Who knows where they'd end up if you didn't shake them awake.

7. Your fingerprints are one-of-a-kind.

In 1888, physician Henry Faulds wrote an article that said that each person's fingerprints are 100 percent unique. And while fingerprints are still used today as evidence in criminal investigations, we actually have no way to prove that each of our fingerprints is unlike any other person's. It's simply impossible. In fact, there are 22 known cases of fingerprint mistakes in the history of the American legal system.

8. The ability to roll your tongue is genetic.

In 1940, a geneticist claimed that the ability to roll your tongue was determined by your genetics. A mere 12 years later, that theory was disproven by another (smarter) geneticist. In a study of 33 sets of identical twins, seven of the pairs had one twin who could roll their tongue and one twin who couldn't. But their genes were the same. So clearly, the ability to roll one's tongue is not based on your genes. Yet the myth persists.

9. We only have five senses.

And no, the sixth one isn't "seeing dead people." Scientists estimate that humans have between 22 and 33 senses, some of which include a sense of balance, sense of temperature, sense of pain, and sense of thirst. It's true; we are much more complex and interesting than we're told when we're growing up.

10. It takes seven years for your body to digest swallowed chewing gum.

Gum may not be digestible, but that doesn't mean it can't pass through your digestive tract. Therefore, the idea that it takes seven years for your body to digest a piece of swallowed gum is a total myth. The human body is capable of passing objects up to the size of a quarter, so unless you wadded up 10 pieces of gum and accidentally swallowed a giant gum mass, you should pass it just fine.