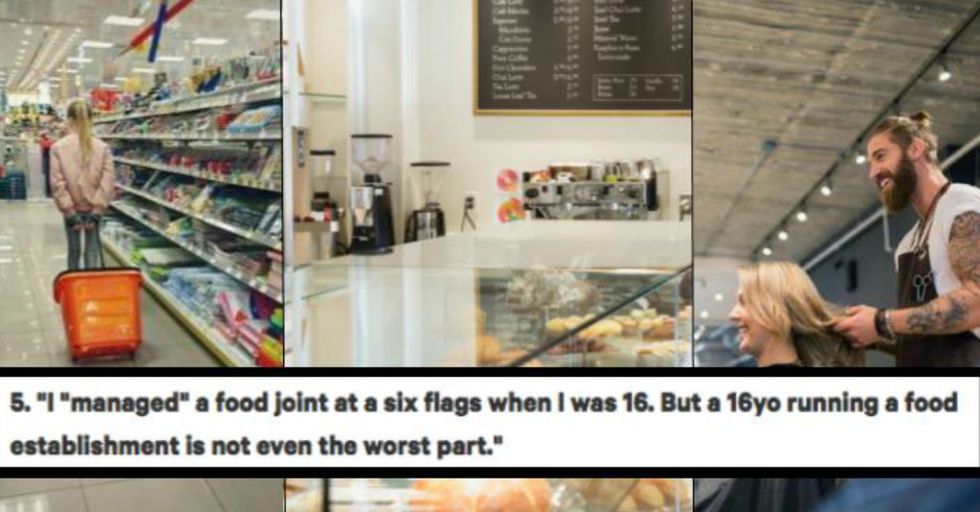 Everyone has their fair share of workplace horror stories. Maybe your boss is a jerk, or the pay is bad. Sometimes you're forced to work overtime, but usually it's nothing so bad that you question your own morals after working there.

These 10 stories of workplace horrors might make you seriously reconsider visiting certain retail and fast-food establishments.

Seriously, how do the managers from #8 live with themselves?!

1. "I worked in a coffee shop where they would buy individually packaged muffins in bulk, like the kind you see in convenience stores."

"They would then have us remove them from their packaging and wrap them in saran wrap, and sell them as homemade for over twice the price as what they sold literally next door at the gas station. I always enjoyed the compliments I got for my baking skills."-Mlefurr

2. "I worked at CVS and we had a guy go back to the pharmacy, reach over the counter and grab a tray full of filled(?) prescription papers and ran out the emergency exit."

"These papers included private information on DOZENS of our customers. Names, numbers, addresses, meds they are on, etc.. There was virtually no reason for that information to be so easily accessible or out in the open, even behind the counter. Some tech really screwed up, but the kicker was my store manager who told everyone not to tell anyone or report it because it 'wasn't that big of a deal.' All I could think about were all of my regular customers that had come in that day. Called HR that night and reported him. turns out, it was a big deal. Full on investigation big deal. Every single one of our customers had to be called and informed of a breach because there was no way to know who's prescriptions were in that tray and who's weren't. We lost a lot of clients."-NeoQueenSerenity

3. "At a movie theater where I used to work, at the end of the night, we would collect all the unsold popcorn and stuff it into these enormous yellow trash bags."

"The next morning, yesterday's popcorn was the first to go in the warmer. My boss said that popcorn was fine to reheat and serve for up to a week. We never dated the bags, though (bags that we were not allowed to throw away. We reused them all the time) so there was literally no way to know how old the popcorn was."-KitchenSwillForPigs

4. "Went to an Aveda beauty school. Every year Aveda does a big recycling cap program, since most plastic caps cannot be recycled."

"We collected caps for a month, and our clients were really excited to be helping the environment. After the promo was done the instructors made us grab 3-4 garbage bags of caps each...and we threw them in the dumpster of the building next door. We didn't even use our own trash. Probably because Aveda can take away their franchising rights if they find any infractions."-stalkercupcake

5. "I "managed" a food joint at a six flags when I was 16. But a 16yo running a food establishment is not even the worst part."

"We literally watered down the nacho cheese about (50/50), I grilled chicken for 10 hours a day on the same grill without time to clean it so by the end of the day there was a quarter inch of gunk built up, I had new crew members everyday who had never worked there before, my managers would take their breaks when we needed to close but we couldn't leave until they checked our work, so we would just sit for a good 30mins before we could go home. I ended up getting fired because in accidentally bumped a HIDDEN SECURITY CAMERA while cleaning in the back room."-CunningMan59

6. "The first thing you do every day at PetSmart is dump the dead reptiles into the trash."

"We treated them as well as we could once they were in the store -- given our fairly minimal resources -- but they're mistreated in transit and often die within a day of arriving at the store. We once reordered a chameleon three times because they kept dying. Everyone knew they were too delicate to transport, but head office wanted a chameleon in the store. Most employees aren't aware of this, since management tries to sweep it under the rug, but I was the morning custodian."-enjollras

7. "Worked at Domino's in college. Our franchisee made it a fireable offense to call in sick."

"If you missed a scheduled shift, it would be considered quitting, and you wouldn't get put on the schedule ever again. As a result, workers would come in to work INCREDIBLY ill and still make your food. I once witnessed a coworker begin to make a pizza, stop to go puke in the bathroom, then continue making the pizza."-enigmazweb24

8. "I worked at this awful fucking pet store that sold dogs."

"We all knew the prices of all the dogs by heart but if someone asked we had to pretend not to know, bring the dog out to them to play with(even if they specifically ask you not to)so they get attached. Meanwhile I'm in the back with my thumb up my ass pretending to look up the price. Then when they're all nice and bonded with the dog I'd have to come out to tell them that instead of the $300ish they were expecting, it would be more like $2,500. Queue tears. Lots of fucking tears."-2muchpain

"They will sell you sandwiches that are literally roast beef shavings and burnt scraps because they want to save money by not wasting even inedible bits of beef. I was told, when I worked there, to not waste any meat, even if it meant rolling a pile of burnt skin, rubbery scraps, and miscellaneous shavings into a ball and plopping it on a bun. I quit after a week."-manalive121

10. "At Staples (in Canada), we ran out of pencil crayons during back to school season, which was not good for business; parents want to do one-stop shopping for school."

"So one of the managers took me to the Wal-Mart at the other end of the shopping centre, and we loaded up 2 carts with ALL of their pencil crayons. It gets worse. To eliminate any suspicion and prevent the Wal-Mart managers from stopping us, we told the cashiers we were on a mission trip to Africa and that these were supplies for poor schools over there. They believed it, we took them all, stocked the shelves at Staples and resold them. Looking back, damn that was some shady shit."-Meowmeowsuplex