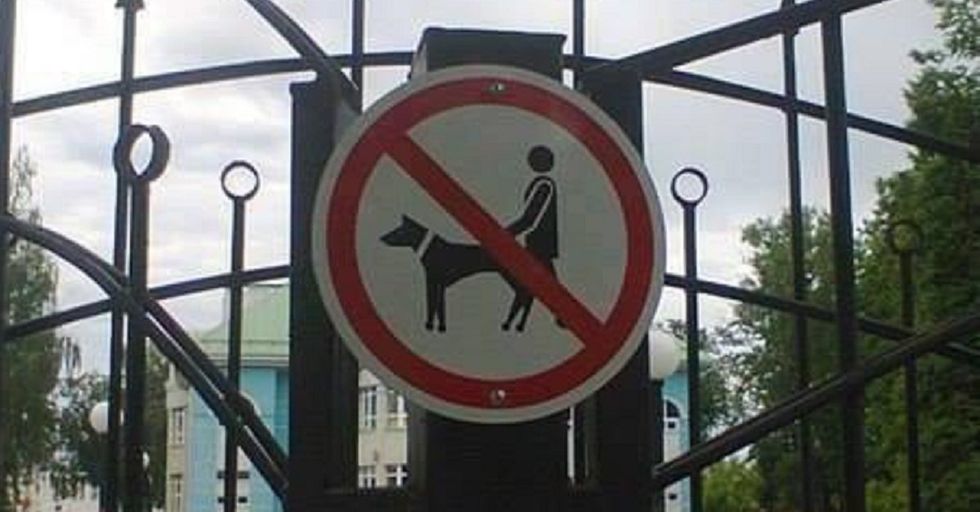 People have a lot of ideas. They aren't necessarily GOOD ideas, but that usually doesn't stop people from acting on them. And it certainly didn't stop these "design experts" from turning their weird strokes of inspiration into a reality. We don't profess to be experts ourselves, but you don't need a degree  to see that.... somethin' ain't right with these things.

Whoever decided that this was the best way to display clothing has some issues.

It looks like a serial killer's trophy room or like a warning to shoplifters — "This could be you too."

Don't see anything? Just look a little bit closer and you'll see it. Yep. Not great. Well, unless they're actually lowering those people to safety by their necks which is — let's face it — unlikely.

Warning signs are the best.

Especially when you have no idea what they're warning you about. Anyone with stairs in their house needs this sign for no reason other than it looks hilarious. "CAUTION: Aliens performing chorus line on stairs"

Signs appear to be the ultimate challenge of humanity.

We literally cannot get them right. This sign was so close to being normal, but it just gets a little too weird with the floating baby head. WHY ARE THOSE PEOPLE JUST STANDING THERE LETTING THIS HAPPEN?

Anything involving stick people designs can go so wrong so fast.

Paint what? Where? It's not just limited to stick people, either.

There are not enough "nopes" in the world for this damn sign. How did no one catch that before it went up? It's good advice, but if people need a sign to guide this type of behavior...

You know everyone just collectively winced when they saw that. That man just wants to feel something!

Stick people, outlines of people, REAL PEOPLE... there is seriously no right way to do it. But seriously, how did that many people approve this?

These cycling uniforms will make you do a double take.

Why would you ever use tan in a uniform, let alone on the crotch region? We could've sworn those uniforms were designed by a guy, but nope, turns out it was a female designer!

This tea strainer had the potential to be really cute.

Some of these are so bad that they have to be on purpose. Like, there is no way nobody caught that, right?

Buddha elf has got that craven look in his eye. If that baby wasn't a thumb or a toe, I'd tell it to run.

Hopefully you have giant arms for this one. Or like the Saw movies.

Because if you don't, you might have a rough time in this motel bathroom.

Some of these ideas are just plain awful.

Unless that's bulletproof glass, you're just asking for absolute disaster.

Speaking of absolute disaster, what in the actual hell is going on here?

The braille makes it even worse. Imagine being blind and wandering into this elevator!