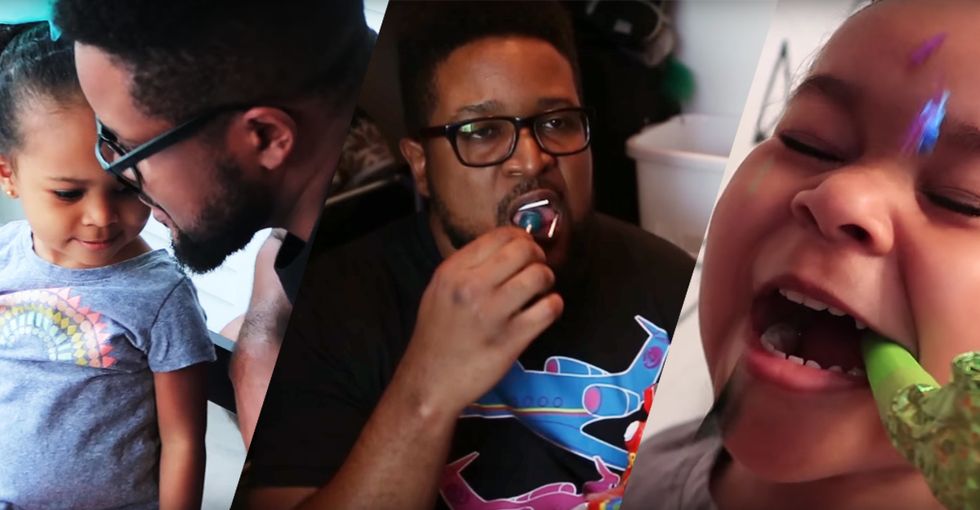 Parents are getting a huge kick out of potty training for the first time since the invention of indoor plumbing, and it's all thanks to La Guardia Cross, a South Florida father of two who took to YouTube to share his potty training secrets.

Cross posted a video called "Potty Train A Toddler in 22 Easy Steps" just a few short weeks ago, and as you can tell from the title alone, his method is way more realistic than any of the other potty training systems most parents try. Based on the hundreds of comments online, it's obvious that parents can totally relate to the video and the many ways in which Cross attempts...and mostly fails...to reach this ever-elusive milestone.

Few words strike fear into a parent's heart like the words "potty training," and with good reason.

I mean, look at what it reduces us to! Whether you try the "wait-and-pee" method, training pants, a sticker reward system, or one of the other 547 ways Google suggests you can potty train, every program essentially requires you to barricade yourself inside your home and clean several hundred puddles of pee off your personal belongings. On top of that, you have to maintain rodeo-clown levels of energy and enthusiasm, even as you slowly begin to accept the fact that someday your kid is probably going to be the only girl in her dorm still wearing Huggies. Not fun. In the video, however, Cross shows us that none of the traditional methods mean anything anyway, because potty training inevitably goes the exact same way, every time. Like this.

As we all know, potty training starts with...well, the potty.

And as anyone who's been there knows, the training potty itself spends the first several months (okay, sometimes years) sitting in the corner of the bathroom, unused. It's like we parents all hope that the mere suggestion of potty training will convince our kids to magically ditch their diapers. Well, we can dream, can't we?

Cross then takes us through all the stages of potty training as they actually happen in real life.

Like the part after they have their first accident, when we get paranoid and start asking them every 15 seconds if they have to pee. Of course whether they need to go or not, Cross points out, "they're always gonna tell you 'no.'" Toddlers are generally much more interested in flushing your keys down the toilet than sitting on it for any extended period of time, like two whole minutes.

Before long, though, you're throwing them a ticker tape parade for actually using the potty!

Even though they only did it accidentally, because you've been taking them to the bathroom literally every 20 minutes since they woke up.

Eventually, Cross explains, your toddler will finally announce that they have to go pee pee in the toilet and you'll need to "like nearly break yourself in half trying to get them to the bathroom."

The bad news? It'll be a false alarm.

Sure, you probably pulled every muscle in your body trying to get them there in time, but whatever.

Hang in there, because there's more work to be done...

You still have to send them to preschool, so Cross advises that you have a heartfelt talk with your toddler about how much you believe in them...

...but he also advises to pack about 100 back-up outfits in their bag for them to change into. Because, let's get real. There will be accidents.

It's enough to send parents to a closet where they can sit in the dark and stress-eat all the "reward candy" they bought to encourage their kid to use the potty.

Also known as "bribe candy." Because parents will do anything to get the $&#% out of the diaper phase. Anything.

Eventually, potty training makes every parent wonder not only if they're going to succeed, but if they're ever going to get to leave the house again.

Parents start to consider the possibility that they'll either need to become hermits, pack a few dozen ShamWows for accident cleanup every time they go out, or just give up and invest in a lifetime supply of diapers.

As you can tell, Cross's method still requires you to basically barricade yourself inside your house and clean up pee. Lots of pee.

So. Much. Pee. But the difference is, his plan is realistic. Cross isn't gonna pretend every child will be motivated by bribes, no matter how sugary they are. He isn't even going to pretend it's remotely possible to get through the process without accidents and setbacks.

But, he is giving parents hope.

Because, as all potty training efforts eventually do, Cross' method worked! "This is the most honest 22 step process I can give you to potty train a toddler," he says. "It's not based on what's most effective, it's based on exactly what my wife and I did, getting frustrated with the process, then seeing it all work out in four days. As of this post, Amalah's been officially potty trained for about a week." But does it work for everyone? Others were quick to weigh in on Facebook...

Some claimed that character underwear was all they needed.

We're sure Dora doesn't like to get peed on, but neither do parents, or their couches and floors. It's a teeny bit more complicated than a simple wardrobe change for most of us.

Of course the first step is making sure your child is ready (and that you are, too).

Most kids will give you signs that the time is right to start training, but as Cross points out, every kid is different. "Amalah was fully comfortable in her diaper and would have walked proudly into high school with one on," he explains, which is the trouble with toddlers. Most of the time they'll freak out over a bump in their sock or a tag in their shirt...but as soon as you want something to bother them (like a wet diaper), it won't. Guaranteed.

Overall, most potty training parents were giving Cross a virtual high five for the video (after sanitizing their hands, of course).

"This has been my week so far," laments one fan with a laugh. "Pee on the bean bag chair, poop on the high chair, pee on the floor in every room in the house. He would definitely win at monopoly because he has covered the whole place with his properties." Accurate.

Check out the full video below for some laughs, and some insight into how potty training really works. Or doesn't work, as the case may be.

Cross has such confidence in his newfound ability to potty train kids, he's already turned his attention to their younger daughter. His plan? "Nayely turns 4 months this week, so we'll be switching out her diapers for underwear by Saturday." Good luck to Cross, and to all parents out there who are dealing with potty training. We hope the reward candy lasts until your toddler is finally housebroken or your spirit is broken, whichever comes first.