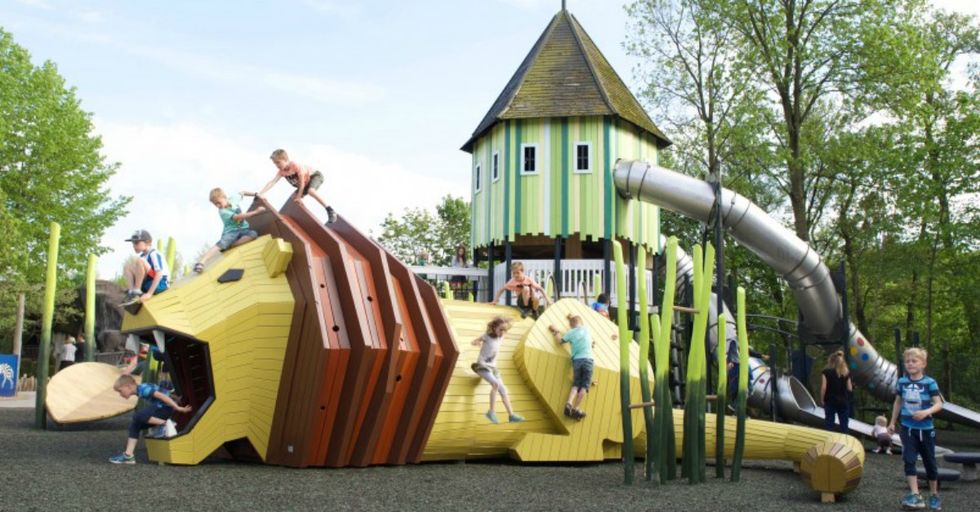 These 35 AWESOME Playgrounds Are the Coolest Things You've EVER Seen

Nothing screams childhood quite like a big ol' playground.

When I was a kid, playgrounds were seriously my jam. Each day, I'd count down the minutes until I could race out the door, sprint down the block, and make it through those park gates to jump, climb, frolic, and befriend all of the other little nature-loving weirdos just like me.

Cut to adulthood when I'm browsing through the interwebs and what do I find? These MIND-BLOWINGLY amazing parks.

My inner-child will not stop cheesin'. Come explore these miraculous wonderlands with me, friends, because...YOLO.

A thirty foot tall climbing pyramid?! Sign me up!

Along with showcasing all sorts of fabulous crystals, Swarovski's Austrian crystal museum also has a four-floored open-air playtower. Why? Who cares! A playspace with a one-of-a-kind climbing net, rope swings, a view, and crystals? Now that's what I'm talking about!

This Australian playground offers both abled and differently-abled children equal opportunities for fun. With wheelchair-access swings, a thirty-foot spiral slide, ziplines, and more, this park is what dreams are made of.

This awesome playground is actually located on the roof of a Japanese kindergarten. Imagine getting dropped off here every morning! BYE, MOM!

Zipworlds is a converted underground playground filled with trampolines. FILLED WITH TRAMPOLINES! Life is suddenly more magical than we ever dreamed it could be.

This 60,000 square foot Corona, New York playplace is the biggest outdoor park of its kind in the entire country. Here, kids can learn all about simple machines, climb up a big spiderweb, play with water, ride a giant seesaw... Okay, guys. This is my stop. TTFN. JK! More PARKS!

Back in 2005, Dutch company, Carve was tasked with an interesting problem...construct a dynamic children's playscape that could accommodate at least sixty children and exist in an urban setting. Aka, be super fun and super small. They seriously succeeded with this wavey design. Can I just please be a kid again already?

Textile artist and researcher, Toshiko Horiuchi MacAdam, designed this space as a sculpture children could experience through all their senses. And this wonderland's certainly stood the test of time, inspiring child after child to climb and explore its vibrant surfaces.

One of many magical parks designed by Danish architectural design firm, Monstrum, the Ondense Zoo is inspired by the African Savannah. Many school groups pass through this playground and use its high tower for storytelling time.

One of the things that makes Woodland Discover Playground so cool is that it was, in large part, designed by the very Memphis, Tennessee kids who now play on it most. It was one of the first projects worldwide to be certified by the Sustainable Sites Initiative, making to both seriously fun for kids and for the environment.

Another Monstrum masterpiece, inside this playground's tower lies a gigantic network of red climbing ropes. Cancel all my calls, Secretary! I've got a playground to master.

Parked next to Greensboro, Alabama's equally awesome, Tony Hawk Foundation funded skate park, this playscape is EPIC. Constructed primarily from recycled galvanized steel mint oil barrels...2,000 of which are arranged in a ridiculously fun-looking maze. This place is an adventurous youngin's dream.

via: New York By Design

Minimalism is the motif of choice in this New York City park. Here, children have access to only blocks, sand, and water. The rest? Well that's all up to them! No pressure.

And yet another Monstrum creation, Kloden offers kids the chance to trample over all sorts of mis-leveled terrain. I want to climb to there.

While this one's more of a playground for adults than kids, it's still super cool. The park converts energy produced by this outdoor gym equipment into useable electricity. Welcome to the future, y'all!

Yes, City Museum itself is essentially one big playground, but this outdoor component is seriously rad. There's a ferris wheel on the roof! On the roof!

A project from San Francisco's Exploratorium, this Geometry Playground is actually a major traveling exhibition. Its design encourages climbers to use their sense of spatial reasoning to reach new heights.

The Can-Do Playground is Delaware's first boundary-free playground. This safe space is accessible for kids of all physical, mental, and sensory abilities fostering a fantastic community-wide sense of inclusivity.

Nestled in the heart of Aurora, Illinois, this playground has it all. Slides! Ropes! Catwalks! Oh MY!

Trash! It's all trash! No really, this Welsh playground is completely built from trash. Playing in and around this adventure playground teaches kids to take risks and work together. Amongst the trash. Sounds super sanitary.

Discovery Playground is a fully accessible playground filled with all sorts of sensorily-rich play equipment perfectly suited to every child's needs. What a beautiful way to foster acceptance and compassion.

Located in Singapore, this wildly inventive dragon playground seems like a serious delight. I'd be down to play on that!

A playground full of musical instruments? Count me IN!

Built after Hurricane Katrina, this New Orleans playground was developed by the Brad Pitt-led Make it Right Foundation. They designed and built the park using entirely sustainable materials and methods.

This fully-accessible park is beyond ADA approved, much thanks to the grassroots efforts of its founder, Zachary. Loving all these inclusive playspaces!

via: Friends of Clemy

Decked out in its awesomely bright color palette, this park is a seriously psychedelic. Perfectly designed for kids of all ages and ability levels to enjoy, there's a little bit of fun for everyone here.

This French playground features all sorts of different climbing terrains. Seems like another perfect place to let your inner adventurer run wild.

Sweden's Fruit and Scent Park is a true feast for the senses. Between its adorable design and fun climbing capabilities? I'm so down. I've never been more down.

Yet another Monstrum creation, this Denmark playground looks super wacky. And a little queazy-making, or is that just me?

via: Travel and Leisure

One of many attractions in this technologically advanced Dubai park, this playground has a seriously futuristic feel. Added perk? The whole park as Wifi access. Because of course it does.

One of Australia's premiere playgrounds, St. Kilda Adventure Park offers its patrons some seriously thrilling attractions. From slides that cross over one another to its rugged-feeling climbing areas, this park is not for the faint of heart.