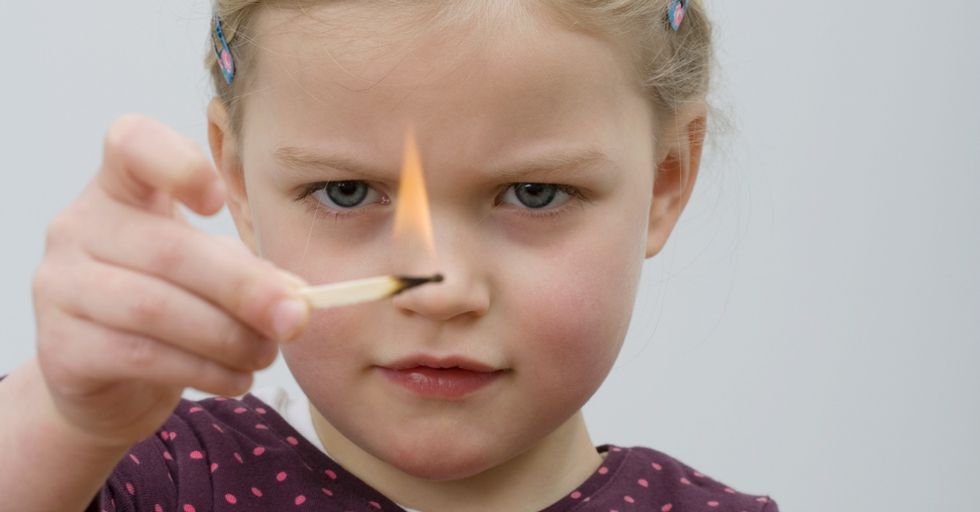 Kids and their fads, right? Shopkins, Minecraft, Pokemon, demonic rituals... who can keep up with their latest craze? This mom's story about her 6-year-old's new recess "game" is as funny as it is weird and creepy. That special mix that kids so often are.

Twitter user Anne Thériault told a story over a series of tweets about her 6-year-old son's new recess game.

What's the scariest thing in the whole wide world? Demonic clowns. Naturally, this makes demonic clowns exactly what this group of 6-year-olds wants to play with. How do you play with demonic clowns? You first need to summon them.

OK, we all did the Bloody Mary thing. But we didn't like it.

Why does this group of little kids know how to summon stuff? Isn't that for slightly older scary kids? Maybe middle school, not kindergarten!

"Every time we do it, something about the world changes." OMG RUN AWAY!!

OK, so the things this group of demonic kids are changing about the world seem tame enough. But still. Is there a butterfly effect to all of this?

Kids don't know subtlety or understand implied meanings. You need to say exactly what it is you don't want them to do.

I was like "please don't do demonic rituals at school" I can't believe those words came out of my mouth for real
— Anne Thériault (@Anne Thériault)1507771876.0

We've all said things as parents we couldn't believe we had to say. But usually it's more like, "We don't touch our genitals at the table," or "Please stop swinging the cat at your sister like a weapon." But, hey, every family is different.

If it comes to it, this Twitter thread could serve as evidence.

Anyway if I die, please know that it's because my son summoned a killer demon clown at recess
— Anne Thériault (@Anne Thériault)1507771900.0

This mom is taking things in stride. Killer clowns today, rainbow loom bracelets tomorrow. Or, you know, certain death. She has some concerns, but probably not the ones you'd expect...

The hardest thing about navigating those school years as a parent is teaching your kids that they don't have to do it just because all the "cool kids" are.

But honestly I feel powerless to stop it. I mean, who am I to tell him not to summon demons if all the cool kids are doing it?
— Anne Thériault (@Anne Thériault)1507771998.0

Of course, you might not expect that the "it" all the cool kids are doing is demonic rituals summoning IT. The cool kids always have the worst ideas.

It's tough to put your foot down as a parent. Is it really so bad? Does the kid really need to stop doing it? Isn't it nice that he's playing with (demonic) friends?

I don't want him to be an outcast at school just because his mom won't let him do demonic rituals to summon horrifying creatures
— Anne Thériault (@Anne Thériault)1507772038.0

"Ha! Ha! Your mom won't let you do demonic rituals!" Can't you just hear the other 6-year-olds jeering at this poor kid? He'd be forever known as No Demons or something. Those nicknames we get in early elementary school sometimes stick!

That's one way to look at it. Maybe these kids are gifted! If they're already summoning demons in kindergarten, what the hell are they going to do at 6th grade slumber parties??

Teachers have definitely seen it all.

Generation after generation of kids do the same stuff at recess. Boys chase the girls, girls chase the boys, girls form evil posses, boys wrestle in the dirt, and they all summon demons.

Reason #75489 that teachers should make all the money: phone calls home to parents.

Dealing with kids all day is rife with awkward moments. With the 6-year-old set it's usually around kids who can't button their pants after using the bathroom, or who don't get to the bathroom in time, or really anything else involving the bathroom. Much less about killer clowns. This conversation would be far outside the typical kindergarten teacher's wheelhouse! You'll want to see the stories (and pictures)  that some people shared of their own creepy-ass kids!

How freaking scary is elementary school these days??

A game called horror? Don't schools still have swings and see-saws and balls and stuff?

Is motherhood stressing you out? It could be worse. You could be this mom:

Nope. What would you do if you woke up to your kid like that? How attached to this one twin is this mom? She has another one after all...

Usually, when it comes to horror, it's the parents' job to show the kids that there's nothing to be afraid of.

I don't care how grown up you are, Bloody Mary is at least slightly scary every single time. You know it's not real. You really do. But there is that tiny creeping thought each time. Why chance it?

The bottom line is that kids are creepy AF.

Kids have always been creepy. They say weird stuff that makes us think they see ghosts or remember past lives. They lull us into complacency with their cute littleness and then they start writing REDRUM on the walls or talking to the static on TV. The only way to deal with kids is to have a sense of humor about it. So, if we're all attacked by killer clowns summoned by a gang of demonic kindergartners, at least we laughed (right up until the terrified screaming).