These Actors Were Born In the Same Year...But You'd Never Believe It | 22 Words 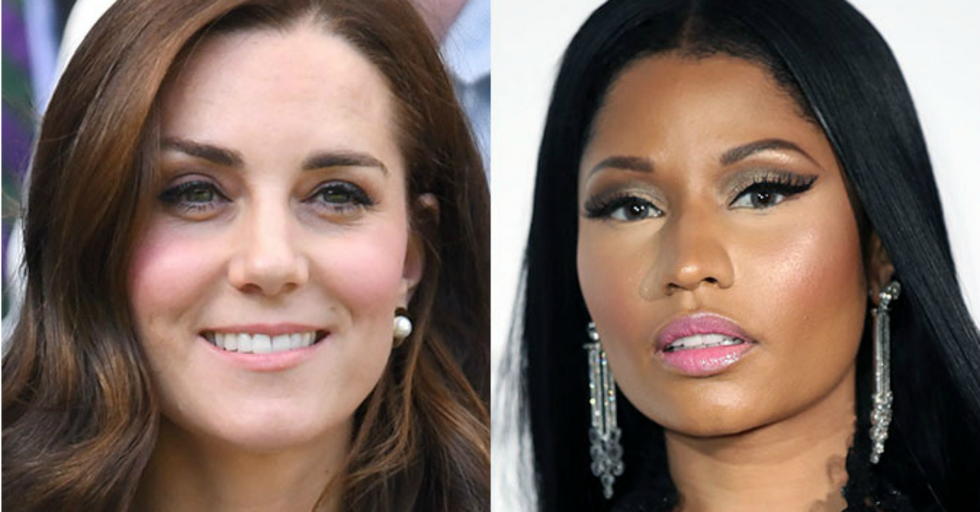 These Actors Were Born In the Same Year...But You'd Never Believe It

There's something downright unsettling about celebrity ages, especially when these larger-than-life figures are the same age as others who doesn't seem like they could possibly be the same age.

You'll be shocked to discover that these actors, actresses, musicians, politicians, royalty and rappers were born in the same year...

This is no joker. This Batman villain and that hobbit were both born in 1971. But everyone ages differently. Martin Freeman's hair gets all salt-and-peppery, and Jared Leto's somehow gets longer, blonder, and more lustrous.

George Michael Bluth and The Mountain from Game of Thrones were born within a few months of each other in 1988, making them both 29. Genetics are wild, aren't they?

Kate Upton might have been gracing Sports Illustrated swimsuit covers while Selena Gomez was waving a wand on the Disney Channel in The Wizards of Waverly Place, but that doesn't mean that they weren't born in the same year. Both of these women have accomplished so much, and they're not even thirty yet. Even weirder, they were both born in the '90s.

These two silver foxes are both in their mid-forties. They were born in 1970 and they're seriously both aging like fine wine. Or champagne. Or cheese. Pretty much, they're both delicious.

You mean the coolest guy ever and John Lennon were born in the same year?! The late Beatle and the Babe star are both, let's face it, total babes. That'll do, world. That'll do.

Can someone explain how Chuck Norris and Dumbledore are the same age? These 77-year-olds are both wizards in their own right. Gambon for obvious reasons, and Norris because he has got to have a bunch of Horcruxes hidden throughout Texas to stay looking so fresh.

I bet the reason Tarantino cast Brad Pitt in Inglourious Basterds was that they were both born in 1963. That and like, he was really great in that role.

This one actually makes no sense. Gale Hawthorne and that cute kid from Love Actually are the same age?! But... but... the beard! We're going to need a minute to wrap our heads around this one.

The Olsen Twins and Lady Gaga

This is shocking to me. The Olsen twins are forever pre-teen detectives in my mind, and Lady Gaga is not even a human person. She's a celestial orb of power, meat slabs, and beauty. So I don't know how pre-teen detectives and otherworldly orbs can even remotely be the same.

Both Anne Frank and Martin Luther King, Jr. were born in 1929.  These two extraordinary people made history in iconic and devastating ways. Ultimately, both they believed in the ability of people be good and to do what's right.

These are two very different people, for sure, but I wouldn't be surprised if both Elvis and Woody Allen owned a pair of blue suede shoes. Think about it. I'm right, aren't I?

Has anyone ever checked to see if Queen Elizabeth is actually Marilyn Monroe? Because I honestly feel like we could be looking at two pictures of one person, years apart.

Her recipes and his songs are both out of this world, so while they're universes apart, it's no wonder Paula Deen and David Bowie share a birth year.

WHAT?! Two luxuriously-haired, deep-voiced action stars were born in the same year? OK, this one is only sort of surprising.

Jack McBrayer (a.k.a. Kenneth the Page from 30 Rock) must have gotten lost in the woods one day and stumbled across a fountain of youth because I have a really hard time believing he's over 40. Patrick Wilson seems to be Benjamin Button-ing as well. This world makes no sense, but it's beautiful.

I don't know about you, but I feel like this pairing is ripe for a buddy cop musical comedy that takes place in Victorian times. This idea is mine, and if you try to steal it I will wreck you. If you're a movie producer, though, call me, maybe?

Did you just hear a "big bang" go off in your head for this one? Because I definitely did.

Speaking of big bangs, KAPOW!! Sheldon the Wonder Nerd and Rick Grimes, Zombie Killer, were born in the same year? We're trying to imagine Sheldon wielding zombie-killing tools and it's kind of hilarious.

This is crazy because Alexis Bledel literally hasn't aged since she first graced the screen as Rory Gilmore in 2000. There have been 17 years since then. SEVENTEEN. My face now matches Uzo Aduba's famous "Crazy Eyes" expression.

Gronk, Harry Potter, and I — the author of this article — were all born in the great year that was 1989. While I'm not a football star nor am I the actor who portrayed arguably the most popular pop culture character ever created, I did once peel a clementine all in one piece. So, there's that.

They can both go by one name and people will know who's being talked about. They've been known to dance. And they've both made pop culture history on more than one occasion. Ladies and gentlemen, it's Madonna and Ellen!!!

Pharrell Williams is another ageless being, and while McSteamy has that whole silver fox thing going on, Pharrell looks like a literal baby. The man doesn't age and he can get away with wearing ridiculous hats. What more could you want?

Their birth year isn't the only thing Natalie Portman and Britney Spears have in common. They both also shaved their heads on camera. To be fair, only one of them did it for a movie role.

Andy Dwyer and Shawn Hunter were both born in the same year, which means middle school through college-aged Robin will always be grateful for the golden year that was 1979.

Courtney Stodden gained notoriety when, at age 16, she married 50-year-old actor, Doug Hutchison. When Dakota Fanning was 16 she was acting in Twilight.

I mean, The Rock is The Rock. There's no beating him (in any sense of the word). Luckily, I don't think the guy from Harold and Kumar has any desire to fight him.

The Duchess of Cambridge and the Queen of the World share a birth year. They should both be proud to be in such good company.

Paul Rudd joins Pharrell, Jack McBrayer, and Alexis Bledel in the I DON'T AGE BECAUSE I AM A FREAK OF NATURE club. He and The Hound from Game of Thrones are the same age. And while that may be shocking, what's more shocking is how nicely The Hound cleans up. No face melting scars in real life!

Never let go (or get any older), Jack. Leo DiCaprio and Seth Green were both born in 1974. And until last year, they had another thing in common: Neither of them had won an Oscar.