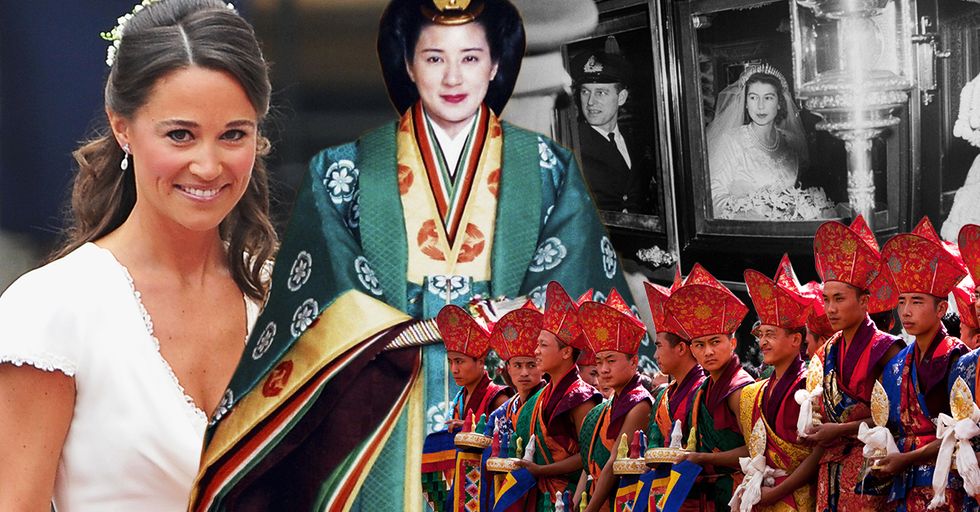 Did you hear? Prince William and Meghan Markle are getting married.

It's a match made in aristocratic heaven – the groom is a prince, and the bride is a Hollywood actress. Now it's time to countdown to the dress reveal. As royal dress-watchers adjust their binoculars and fashion designers sharpen their needles, let's take a look at the most memorable dresses of the past few decades.

When 22-year-old student Jetsun Pena wed the 31-year-old King of Bhutan, she did so in style wearing traditional embroidered silk robes and a multi-colored crown.

In 2012, Princess Hajah, the daughter of the uberwealthy Sultan of Brunei, wore a crystal-beaded beige and silver gown to her wedding — where the Sultan bestowed the groom with the title "Yang Amat Mulia Pengiran Anak," which roughly translates as "Son of His Highness". Now that's lavish.

When Grace Kelly's daughter married, she did so just as stylishly as her mother by opting for a flower crown and a soft dress with billowing sleeves instead of heavy jewelry and more traditional garb.

In 1964, a princess got married to a king, and the dress was absolutely gorgeous. Would you look at the length of that train? Stunner.

@Dior atelier had all hands on deck to create Queen Soraya's couture gown for her 1951 wedding to the Shah of Persia http://t.co/k5wGXcR75h
— Ephemeral Elegance (@Ephemeral Elegance)1437092090.0

When the Shah and Empress of Iran married in 1951, the word of the day was opulence. The bride wore a custom Christian Dior gown in addition to a crown and numerous gems.

Smart, sleek, sexy – those are the words that come to mind when describing the nuptial gown of Princess Letizia in her wedding to her prince in 2004.

When Mabel Wisse Smit wed the prince of Norway in 2004, her gown was bedecked in bows, and she wore a short, stylish train to match.

When Crown Princess Masako of Japan wed the Crown Prince, she wore two wedding gowns – one was a Western ivory-colored gown, and the other was a traditional gown that weighed 30 pounds and was topped off with a white wig.

In 1993, 22-year-old Rania married Prince Abdullah in 1993 after less than a year of courtship. She wore a gold-trimmed gown that is the stuff of every girl's dreams.

The British royals certainly know how to create an iconic wedding look. Kate Middleton wore a custom-made Alexander McQueen dress, which she topped off with one of the Queen's diamond tiaras.

It was the wedding straight out of a Hollywood fantasy. Prince Rainier married Grace Kelly, a Hollywood actress renowned for her beauty, and the dress became an instant classic for its chic, elegant lines.

In 2012, the Hereditary Grand Duke Guillaume married the Countess, who wore a custom Elie Saab dress that had a 13-foot-long train and 50,000 pearls.

Who can forget the iconic wedding dress that launched a thousand pictures? Princess Diana and Prince Charles' wedding was a sight to behold. That dress became a part of many preteen girls' dream wedding boards.