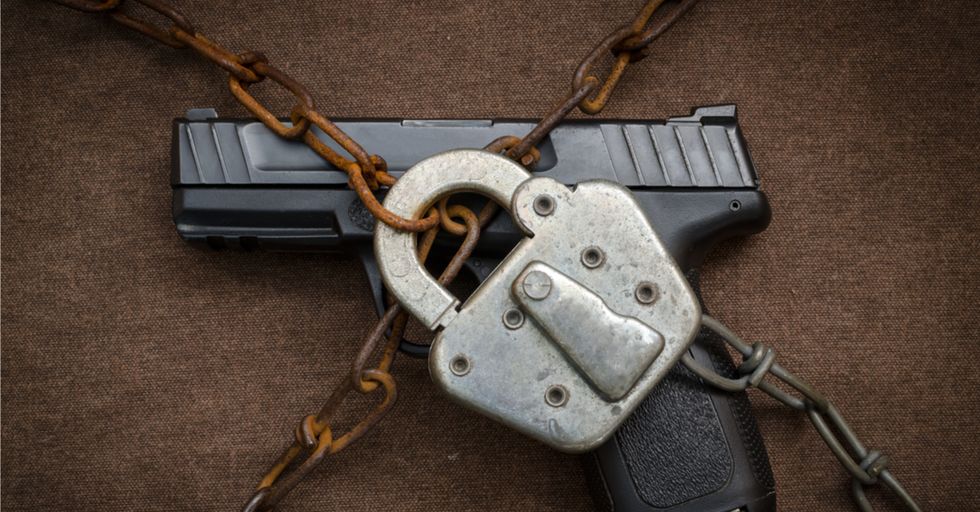 These Are the 10 Craziest Rules about Gun Ownership in Japan

If you want to own (or even use) a gun in Japan, you'd better be damn sure you're prepared. Ever since the 1958 Firearm and Sword Possession Control Law, which proclaims, “No person shall possess a firearm or firearms or a sword or swords,” Japan has one of the most restrictive gun laws in the world. It controls everything from the process of getting a gun to what you do with the bullets once you're done. That's right, in Japan, you have to count your bullets - your bullets! - and that's not even the most insane thing about gun use in Japan.

Here are 10 of the most mind-blowing facts.

You have to take a day-long test to get a gun.

That, of course, is in addition to doing a physical and a mental health check-up. There's also a drug test and an actual shooting-range test - which you have to score at least 95 percent on. Oh, and you have to repeat this process every three years.

In order to make sure that you're a responsible gun-owner, the police will interview your family and friends. They'll also want a blueprint of your house, as well as safety procedures and schematics of where you'll keep the gun.

Your job too, because the police will interview everyone around you. The Japanese government wants to be a hundred percent sure you're exactly who you are - someone knowledgeable, safe, and not in the habit of causing trouble in your community. In fact, any hint of funny business, and the whole deal goes sideways.

Also, you absolutely can't use handguns.

Only shotguns and air rifles are allowed. The idea here being they're way more difficult to conceal, although there was that one time Yakuza smuggled guns into Japan using frozen tuna.

Bullets are a big deal.

Such a big deal that you have to know exactly how many bullets you bought... since you have to return the used cartridges once you're done in order to get more. Even the police get in the game. When they're at the shooting range, they have to return all the cartridges they used. Even if one goes missing, the whole station is in an uproar. As journalist Jake Edelstein, who once attended a Japanese shooting-range practice, told the BBC, "One bullet shell was unaccounted for - one shell had fallen behind one of the targets - and nobody was allowed to leave the facilities until they found the shell."

Your gun can be taken away.

For literally any misuse. Fail your tests, gun gets taken away. Can't fire your gun properly, it's gone. Lose just one bullet, and - you guessed it - bye bye shotgun. In Japan, owning a gun is a privilege, not a right.

You can even be charged for being around guns.

One unlucky Yakuza boss, Kaneyoshi Kuwata, discovered this when the police found a handgun in his convoy of Mercedes Benzes. The gun had been dropped by one of his subordinates, but when it was found, he was sentenced to seven years in prison after a protracted legal battle. Seven years!

You can be charged long after you're dead.

In an astonishing case, an on-duty police officer shot himself to dead with his service pistol and was charged posthumously since it was a "non-designated usage" of his firearm. Just goes to show, you can't get away from gun laws even when you're dead.

Even the Yakuza don't mess with guns.

Having guns is so dangerous, Japanese gangsters don't even want them around. Carry a handgun and matching bullets? Bam! That's aggravated possession of firearms, which is a seven-year prison sentence. Actually fire a gun? That'll cost you three years to life - even if you weren't aiming at somebody. There's also that pesky accomplice tag, which is why the Yakuza bosses do not want gun owners around. See the case of Kaneyoshi Kuwata above.

The police rarely use guns.

Police have service pistols, but they can only use them on-duty, and they have to be responsible for all bullets fired. In fact, all Japanese officers have to be a black belt in judo so they can de-escalate situations rather than resort to deadly force. So what have we learned here?

The point is, don't go to Japan and expect to see guns.

With its strict gun-control laws, Japan has managed to nearly eradicate gun-based violence. In fact, in 2008, Japan only had 11 shooting deaths, compared to America's 12,000. Why can't we all be like Japan, huh?