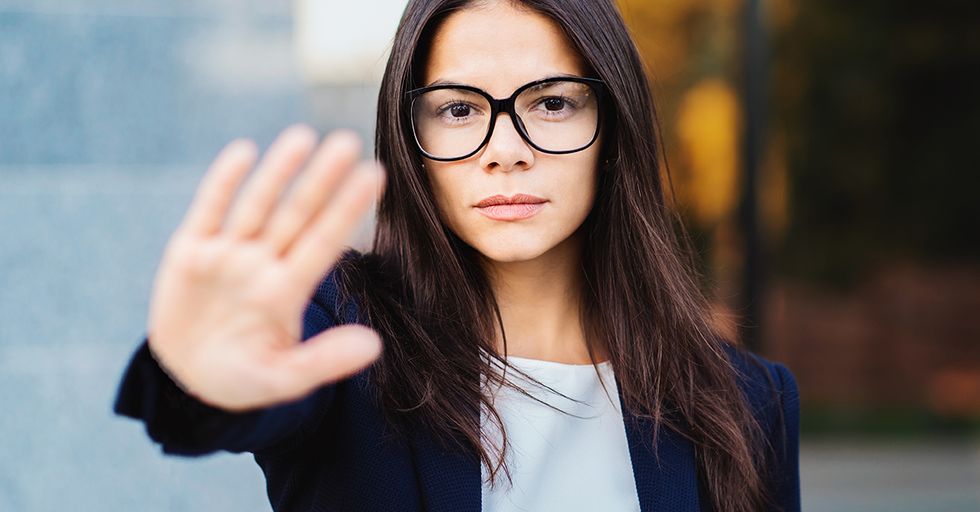 For the most part, I think humans have done a pretty good job of making the world a nice place to live. I mean, sure, we've got climate change to worry about, and we seem to keep offering people with questionable morals very important jobs, but generally speaking, we all seem to agree on what types of things are good, and what types of things are bad.

That being said, there are some major blind spots when it comes to certain behaviors. For whatever reason, there are some super problematic things that people do that everyone just sort sits back and allow to happen. So many people turn a blind eye to these awful behaviors and even straight-up encourage them in some cases!

A recent AskReddit thread gave people to share their own examples of behaviors that we as a society need to stop reinforcing. How many of them do you agree with?

Newsflash: The company you work for doesn't care about you as much as you think it does.

That leaving a company when a better opportunity presents itself is backstabbing. You’re easily disposable to a company so why not upgrade when you get the chance? –boardajuan

This is a big one.

The romanticizing of depression and other mental illnesses in the media. Often in movies, characters with depression or bipolar are depicted as having a sort of "beautiful struggle" which almost always results in some sort of creative revelation. Depression does not look like this. Real depression is ugly. It's days without showers, bad hygiene, a messy room, terrible human interaction, among other things. And being bipolar is not beautiful. The manic highs often result in debt, life-changing decisions, delusions, and getting arrested. I'm sick of people associating being mentally ill with somehow being a creative person who is cursed with a beautiful gift. It is not like that at all. Creativity may be a byproduct of being mentally ill but if you think that it's desirable, just remember that Kurt Cobain, Chris Cornell, Sylvia Plath, and Chester Bennington were all mentally ill and all chose to end their lives. –jpAtmosphere

The glorification of “busy." Particularly in America, we are expected to be working when we’re not at work. We are supposed to be available at all times. We brag about how much we’re doing all the time, to the point where we try to one-up each other to prove that we have less free time than others. Having to be doing something all the time is stressful and stress is extremely unhealthy for us. I want to take more time to rest and relax before I put myself in an early grave. –MargaritaSkeeter

At least give them some headphones.

That it’s ok to occupy your child with your iPad/iPhone in a restaurant or airplane with the speakers blasting. Incredibly rude. –PhoneJazz

So what if you're related?

That you HAVE to be in contact with your family. Some people have crappy, abusive family members. –Singingpineapples

This one drives me nuts!

The idea of the inept dad. No, my husband isn't "babysitting" when he is taking care of his child, he's just being a parent. And no, he isn't a bumbling fool who can't change a diaper or handle a tantrum or figure out what to feed a toddler. He is, in fact, a fully functional adult human parent who has been doing these things for 2 years. –InannasPocket

Both that people must apologize and must accept apologies. I’ve been in fights before in school that involved bullies getting a taste of karma. Required apologies are terrible. On the other hand, people shouldn’t have to accept apologies. It’s not a mandatory thing. –BlueCandyBars

College isn't for everyone!

Pushing college on kids as the only way to be successful. I say this as someone who is highly educated. College is right for some kids, but not every single person is right for college. Directing kids towards different careers and education other than a traditional 4-year university is a must. We need skilled workers in less appealing jobs like crazy. All of these skilled workers would make more than I ever will with my Master's degree. The push for college is just so intense I see so many high school students who have no business going into higher education doing so and failing out after they spent way too much money on something that would never work. The same goes with pushing kids into certain degrees. Not every single person is cut out for a STEM degree. So many of my friends went into school was engineering majors only to realize they hated it and were miserable. They wasted so much time and money only to change their mind and be way behind their peers. All because someone sold them the idea that the only way to be successful was to be a STEM major. –wavinsnail

"Natural" means pretty much nothing.

That "natural" is synonymous with good. The Black Death was natural and it was anything but good. –H_Hardwick

Parents oversharing about their kids. Grandma doesn’t need to know that her grandchild is sexually active, nor does Facebook need photos of naked toddlers. –pm_me_ur_misfortunes

This is not OK!

TV and film have normalized cheating to disgusting lengths. –su4u

Why not just skip childhood altogether?

Oh, children don't have lives! Let's give them MOUNTAINS of homework! –PastaPug

Smart will only get you so far.

That just because you're smart you can be a major a-hole to everyone. ​Fictional Examples: House, Sherlock, etc. –Daomadan

Hint: It shouldn't be.

That being dishonest is normal or expected in relationships. –StoneFenrir

Sometimes it's easier to just give in. That doesn't make it right.

Rewarding kids for their bad behavior. Working in retail, I have seen a lot of parents give in to their kids. If I had kids and they acted up, they'd get no rewards. Of course, when the customers come back in all the kids need to do is act up to get things over and over again. –MachHunter

The one where brides can act like absolute brats during the wedding planning process and be given a full pass. There is never an excuse to be a crappy human. –theguythatclimbs

No one should have to suffer.

The idea that suffering is noble and beautiful. I'm talking about when people condemn the idea of assisted suicide for the terminally ill and would rather they endure the pain and misery they're experiencing because it's "natural" or "the right way." No one should have to suffer because it's what someone believes is "supposed to be done." Show some heart and let people have a dignified death if they want it. –SpeedoKi

Support the troops...but you don't have to worship them.

Blind worship of the military. Not all military members are heroes — some of them are giant dirtballs. The ones who are the loudest on social media are generally not the ones who you should be respecting. –raddlesnake

Cry if you want to.

That guys shouldn't cry. Anyone should cry if they need to. It's a healthy form of expression and release. It's not weak to cry. It's weak to be afraid to. –seefinilla23

This is not something to be proud of.

American work culture. We hardly take vacations and people work even at old ages. Many people's career advances at the expense of their family. –DrDaniels

You're probably not as special as you think you are.

Exceptionalism. If something is seen to be widely true, chances are it applies to you. For example, only 2% of the population can truly multitask and successfully complete two or more tasks simultaneously. This is not the same as doing two things in a row to completion. Maybe you are one of the remarkable 2%, but the odds are 98% that you aren’t. –RichardBonham

That woman should have to wear makeup in their day to day just to look socially acceptable. That they should have to spend 30 minutes every morning putting it on and think it normal to do so because we have to care so much about what society thinks. –zinxscar

Some things were easier before we had cell phones.

Everyone else may be doing it, but that doesn't mean you have to.

The "Triple-M" path through life — Marriage, Mortgage, Mating — isn't compulsory or inevitable. People need to wake up and realize this is not for everyone and you shouldn't try and force yourself to conform and like it. Too many people enter into that arrangement for the sheer sake of it. –Eddie

The casual acceptance of ignorance on an issue as a valid opinion that should go unchallenged. I've started blocking those who post willfully ignorant statements on FB. Their defense each time challenged with facts is some variation of screw you, that's my opinion. –SJExit4

It's not a good look.

The whole "psycho girlfriend AND PROUD" attitude, especially on social media. It's extremely unattractive and brings too much unnecessary drama and attention. If you're out of High School and still act like an immature little brat, that's an instant no from me. –blueeyedbanditjr

I see this kind of thing everywhere.

False equality with genders. AKA double standards. Woman hits a man suddenly? It's funny! Man hits a woman suddenly? He's in jail instantly. The man working at a techy or gaming store? Cool, he probably knows a lot. The woman working in a techy or gaming store? She can't know anything and needs a male employee to help the customer. Things like this just need to stop. –Cyanide_Kitty_101 Share this with someone who has noticed some of the same problems with society!