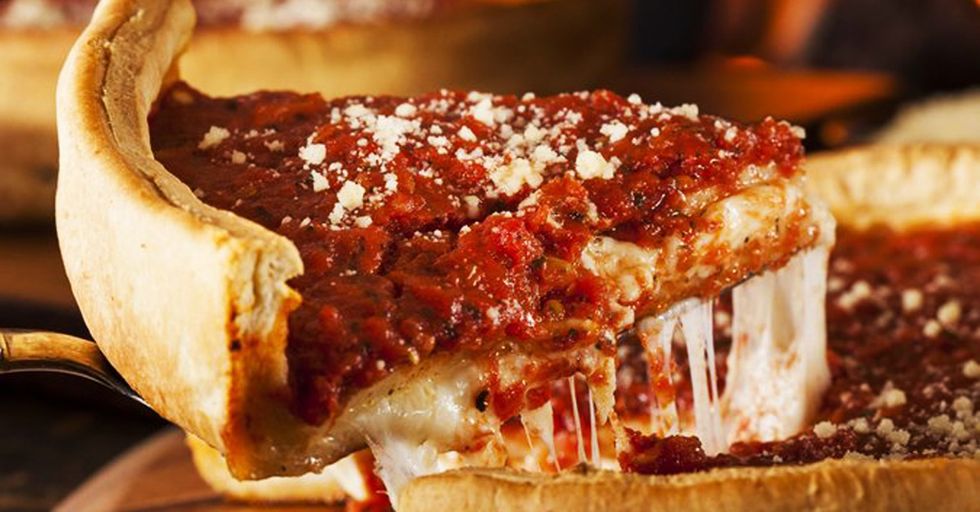 These Are the BEST Things To Eat In Every State

But let’s pretend you’re going on a road trip to all 50 states. What are the “must eat” foods in every state? I’m glad you asked, as Business Insider went ahead and found what they determined to be the one thing you have to eat in every state (and Washington D.C.).

They chose the most iconic and famous dishes by taking local recommendations into consideration and picking items you simply can't get anywhere else.

So pack your bags and your appetite!

Fried green tomatoes, anyone? The iconic Southern side dish consists of unripe tomatoes fried in cornmeal and were made famous by the 1987 novel Fried Green Tomatoes at the Whistle Stop Café. And, of course, the subsequent movie based on it.

Because king crab legs are rare and incredibly dangerous to catch, this makes them an expensive delicacy, but totally worth it.

Chimichangas — deep-fried and meat-filled tortillas — were allegedly invented in Tucson after a burrito was accidentally dropped into a fryer.

Not only are they known for cheese dip, but the state even hosts the World Cheese Dip Championship and has a cheese-dip trail.

Seeing as they're on the coast and the state prides itself on authentic Mexican cuisine, it's no surprise you should pick up a flaky fish taco if you hit the Golden State.

Don't be fooled by the name. In case you never saw Funny Farm, Rocky Mountain Oysters — the iconic food of the state — are actually bull testicles.

Vinegar French fries: Potatoes are soaked in vinegar, then refrigerated before being fried. If you want the original, they can be found at Thrasher's on the Rehoboth boardwalk.

Seeing as it's thought that Key Lime Pie was invented by sponge fishermen in the Keys, who condensed milk, eggs, and lime aboard their boats when traveling for long periods of time (with no access to an oven) it makes sense that you need a slice.

It's the Peach State, so obviously you need to sink your teeth into some crispy peach pie.

Yes, Spam. Make fun of it all you want, but Hawaiians were  introduced to it during WWII. The Japanese in the area started turning it into Spam musubi, a sushi roll of sorts that is made with grilled Spam, sticky rice, and nori seaweed. Voila!

You know all about Idaho potatoes, so naturally you need some  creamy potato chowder with diced bacon on top.

Whether you're on team New York-style or Chicago-style pizza, you have to admit that deep-dish pizza, with its thick flour-and-cornmeal crust, deserves to be Illinois' signature dish.

Hoosier pie (made with sugar, heavy cream, vanilla, and cinnamon) is Indiana's official state pie. If you want to walk it off, there's even a Hoosier Pie trail for visitors.

The pork to bun ratio is a bit off, but Iowa is famous for its pork tenderloin sandwiches, which contain a breaded and fried pork cutlet bigger than your head.

It's the Breadbasket of America, so sample the homemade, sticky, cinnamon-crusted rolls from Stroud’s.

It's Kentucky. Would you expect anything other than fried chicken?

Legend has it that po' boys were invented by two restaurant owners and former streetcar conductors in New Orleans. They created them to feed their colleagues, who were on a strike against the streetcar company in 1929. I guess it wasn't a hunger strike.

When you think Maine, you think lobster. So of course you have to indulge in a lobster roll made with a little tangy mayo and served on a soft hot dog bun.

And when you think Maryland, you think crab. So nestle on into a tender, buttery crab cake lightly spiced with Old Bay seasoning, a Maryland original blend of herbs and spices.

New England clam chowder, sometimes called Boston chowder, unlike its many impostors, is cream-based and full of potatoes — and never, ever tomatoes.

The Coney Dog is unique to Michigan. Why? It's a steamed hot dog on a bun, topped with a meaty, chili-like sauce and diced onions.

The state fish is walleye, so enjoy its soft, flaky texture on crispy bread in a walleye sandwich.

The bewhiskered fish is a popular dish here, usually grilled, blackened, or fried to crispy, flaky perfection, which is no surprise seeing as almost 60% of the country’s farm-raised catfish comes from Mississippi.

Whether you call it fried or toasted, if you breaded and deep fry ravioli and serve it with a side of marinara sauce, you really can't go wrong.

I'm your huckleberry...pie, that is. The berries are native to high altitudes, like the high mountains of Montana, and make the perfect filling for a pie.

Like Hot Pockets? Then you'll dig Runzas — meat-filled bread pockets — can be found all throughout Nebraska.

While the casinos in Las Vegas often look like a buffet of defeat and sadness, you can feed your feelings at some of the most over-the-top buffets in the country. Fill your plate with everything you can imagine.

There are more than 30 orchards full of fresh apples, so of course you need some apple crisp — apples covered in sugar, cinnamon, oats, and butter.

The well-known regional staple of pork roll (or Taylor ham) consists of a processed pork product made with a mix of salt, spices, and sugar cured before being smoked and packaged.

When chili peppers are one of the state vegetables, it's a given that you're known for producing fresh, hot chili-based sauces that are poured on everything from eggs to burritos to burgers.

Nope, it isn't the bagel. It's the pizza pie, specially New York-style characterized by a puffy outer crust that gets thinner and crispier once it hits the middle.

Here BBQ translates to succulent, slow-cooked pork that is chopped or shredded and drowned either in a tangy vinegar sauce or a sweet, ketchup-infused sauce.

Burgers are a staple, but a bison burger is full of lean and juicy bison patties stacked between a bun with crisp lettuce, tomatoes, onions, and other toppings.

You can't go wrong with peanut-butter-fudge pieces that are partially dipped in chocolate to resemble the nut of the Ohio buckeye tree. In other words, get your eyes (and your hands) on some buckeyes.

It's not chicken, but chicken-fried steak is a breaded piece of thin and tenderized beefsteak that often comes with sides like fried okra and grits, and it's a staple in Oklahoma.

Have you heard of marionberries? Dubbed the "Cabernet of blackberries," thanks to their complex flavor, they are a popular choice for pie fillings.

Was there any doubt? It's the cheesesteak, which consists of a long, crusty roll stuffed with rib-eye beef and either melted Provolone cheese or Cheese Whiz. Toppings can include fried onions, mushrooms, and peppers.

Hot Wieners (or New York System wieners) come in veal, pork, or beef varieties and are drenched in mustard, meat sauce, chopped onions, and celery salt before being sandwiched on a bun.

Y'all care for some shrimp served on a bed of simmered milled corn? Mix-ins can include everything from bacon, garlic, and lemon to mushroom and scallions.

Kuchen — the German word for "cake" and the official state dessert — comes in varieties that include pie-like pastries, coffee cakes, cheesecakes, and rolled pastries.

In Memphis, the pork ribs can be ordered “wet" (with a tomato-based sauce) or “dry" (with a rub of spices).

Texas and BBQ go together like brisket coated in a spicy rub and smoked for hours to develop its complex flavors and a giant old plate.

Thinly sliced pastrami stacked on a charbroiled cheeseburger emerged in the state in the 1980s and has been popular there ever since.

Ready to tap that sap? Here they're famous for making sweet, golden maple syrup enjoyed in everything from maple-syrup ice cream to maple-syrup sauces meant to be poured over pork chops. And, of course, waffles.

Virginia ham is a type of country ham — a salt-cured variety of the pork product — that can either be stuffed between two buttery biscuits, buttery bread, and basically anything else you want to butter or not.

A favorite dish in the state is cedar-plank salmon, which is smoked and served on the signature wood.

And over in D.C. you can order Ben's Famous All Meat Chili Dog, a pork hot dog that's served on a warm steamed bun with mustard, onions, and topped with a healthy portion of the homemade chili sauce that they're known for.

Pepperoni rolls, found on pretty much every corner, are meat-and-cheese-filled dough rolls that were a popular lunch option among coal miners. And because they're delicious, they've maintained their popularity.

Eating their curds in whey...or rather, cheese curds often deep-fried in beer batter and served with a variety of dipping sauces.

When you're in Wyoming, you're in wildlife country, which gives you plenty of opportunity to explore the state's array of game meats, which include tender cuts of venison, elk, and bison.