These Are The Most Bizarre Japanese Game Shows | 22 Words 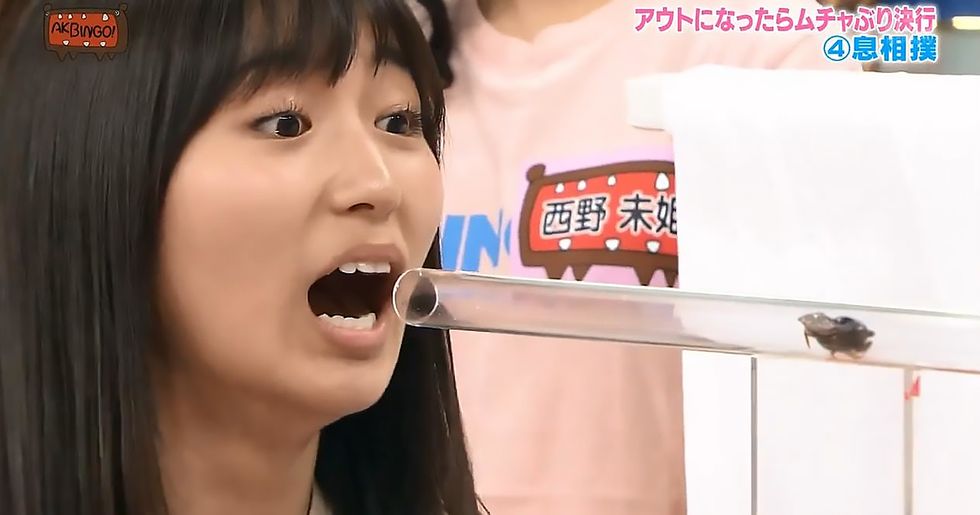 These Are The Most Bizarre Japanese Game Shows

Hopefully, you're familiar with Japanese game shows by now, but if not, you're in for a treat. Japanese game shows are some of the most fun, chaotic, borderline disturbing game shows out there. Because in reality, they are the original prank shows. The premise of every Japanese game show is basically just, "let's watch these people try to do something completely ridiculous and embarrassing that we know they can't do." And if that doesn't sound like something you'd be interested in, you're wrong.

So let's get ready to count down our top 15 Japanese game shows of all time. It's a doozy.

Let's talk about game shows for a sec.

Game shows in the US are now just that one thing you put on when you're home sick from school.

I cannot tell you how many episodes of The Price is Right I've watched with a bowl of chicken noodle soup on my lap.

I can tell you the exact price of any Sanyo TV from the mid-2000s. It's a useless skill, but a skill nonetheless. But do you know what types of game shows are even better than The Price is Right? Japanese game shows.

So let's get to counting down our favorites and you'll see just what we're talking about.

Why is it called that? No one knows. But the objective is to throw a frozen pizza into a microwave in a house across the street. Who thinks of this??

Watch this master at work.

How?! How does that go in? There's literally no way I could do that even if I had years to practice.

But wait... are we sure that's really pizza?

It's a freaking frisbee! I feel completely lied to... And that's why this weird show is only number 15 on our list. Out with the liars!

Wall of Boxes is honestly something I need at like a fair or the next corporate event I begrudgingly attend. Here's how it's played. Four contestants sit atop a wall of boxes. They take turns picking numbers that correspond to items that will be used to knock them down. The last person standing wins and it's dramatic.

Check out the whole episode here.

Eat your heart out, Jimmy Fallon. No game of Catchphrase will ever be as good as this.

Can we also just point out the host's glorious mustache for a second?

I would never be able to pull that off in America. Or Japan for that matter. This man is going places with that thing.

Exploit the men! This show takes B-List Japanese celebrities, puts them in front of a woman in a low-cut dress, and then shames them for staring. Which is hilarious.

Let's call out everyone for staring.

My favorite part of this show is that they have to watch on as they're publically shamed and laughed at.

The fact that this one guy thought he could get away with staring for a full half-minute really says something.

And that something is, "ew gross". Moving right along!

It starts off with a totally innocent elevator ride... right?

And ends with this.

NO THANKS. It's so crazy we had to watch it twice. This actually sounds like a nightmare.

Those poor people probably thought they were being devoured by some kind of Japanese game show elevator beast.

And for those of you that are super concerned (who isn't?), the participants are all told beforehand that a prank is coming -- they just don't know the details.

This sounds like my kind of game show. I would kill this competition.

Contestants just wade through mud and try to catch things.

I love that this idea has enough legs to be an entire show. Also, this might be my new favorite GIF.

The pure defeat after she misses the ball is priceless.

That's basically how I feel every day of my damn life.

"Why don't we run experiments on celebrities and see how dumb they make themselves look?"

If only they were American celebs.

The point of this game is to see who can exit their sensory deprivation chamber (ish) in exactly 24 hours.

By the way, shoutout to that old man.

He has his retirement on lock. That's how I want to be in my 80s. Totally killing it.

Okay, this is incredible. It's like Groundhog Day in real life.

This would drive me absolutely insane.

But by like the third blackout, I think I would have figured out what was happening. Getting that close with the water glass is a recipe for disaster.

I feel for the second guy. He thought he was meeting his soulmate.

Only to find out it was just an elaborate trick to make him look silly.

I'll be honest with you, I have no idea what Pussuma means.

But Extreme Limbo feels like a good way to describe this game.

Someone strap me to some ski boots and take me back to my middle school summer camp. I'm not going to embarrass myself this time.

I wish I could be this casual with everything in life.

The way he performs this limbo is cooler than anything I've ever done in my life. Ever.

Here's the premise: We're gonna put your head in a cardboard box, and then stick you in a room with a bunch of unknown objects.

And then this happens.

Honestly, I would love to see a version where it's just a bunch of puppies. And we could watch grown adults be absolutely terrified.

If they put me in there with my elementary school bullies, I think I would have a full meltdown.

Because this exact scenario is basically what elementary school was like for me. Minus the alpaca.

This is like Metal Gear Solid in real life.

I don't know how these people do it.

I'm honestly just shocked at how well they did following people around a zoo.

The sauna in these costumes will make your skin feel great!

Seriously, these look like the most uncomfortable things. But... Japanese game show!

Alternatively, you could just call this game Slippy Stairs.

I would absolutely play a game called Slippy Stairs.

Who signs up for these games? What do they win? Because it really just seems like they're volunteering to be in pain for life.

How many people have died on Japanese game shows?

Because the answer is not zero. I guarantee that.

Again, I have no idea why this game is called downtown, but Japanese people guessing English words is so much fun.

I'm honestly impressed with how well they do.

If the shoe were on the other foot, I would be terrible. And probably accidentally racist. Who knows.

I love the logic on the bottom row.

From ten to teen to teeen. Just add more Es. That will definitely be right.

A husband and wife prank each other endlessly until eventually their marriage fall apart.

Kidding about the marriage, but watch this...

The poor man just wanted some lunch. And I guess he got some... in a roundabout kind of way.

Unless that's shaving cream and not whipped cream.

Because shaving cream in the eye sounds like the worst thing I can imagine.

Okay, technically this is in Korea, but we had to show you. Really, that's the only reason this isn't our #1. We felt like that would be cheating.

I need to know how Jack Black got roped into this.

Did he fire his publicist right after taping? Or did he go on to become a Korean game show icon? I need answers!

It reminds me of this iconic Chris Farley SNL sketch.

Shoutout to Alec Baldwin for always being slightly unnerving on SNL.

You knew we had to pick this one. For those unfamiliar, a Tetris like shape barrels toward a contestant who has to fit their body into the hole the boxes make.

I seriously want to play this game drunk with my friends. Way better than Cards Against Humanity.

Guess the price of this, answer this trivia question, complete this phrase.

I should know, I was on a game show once.

And I lost on the word "museums," so now you know exactly the quality you've gotten from this article.

So what did you think?

What were your favorite game shows? Did we miss any? Hit us up in the comments and maybe we'll have to move some things around!