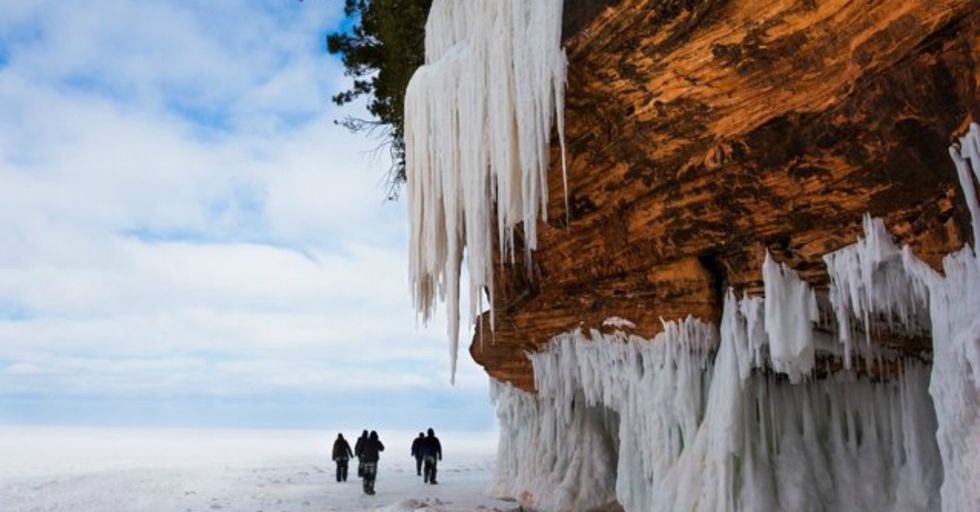 These Are the Most Breathtaking Natural Wonders In EVERY State

There’s a reason it’s called, “America the Beautiful,” and that’s because each and every state has unique and often breathtaking scenes created entirely by nature.

Because you probably haven’t had the pleasure of seeing each one in person, Business Insider went ahead and chose one beautiful natural wonder from every state, proving the country lives up to that name.

It's no Niagara Falls, but they have Noccalula Falls, a 90-foot waterfall that has its own gorge trail that passes by an aboriginal fort, a pioneer homestead, Civil War carvings, and caves.

Known as the aurora borealis, the Northern Lights — a natural light show that is caused by the collision of solar wind with particles in our atmosphere — are only a common occurrence in our northernmost state.

You probably know about the Grand Canyon, but Arizona is also home to The Wave, a sandstone rock with thousands of linear carvings caused by time and erosion.

This would be the Ozark region, with its steep-sloping plateaus, drastic drops in elevation, and wooded mountains as far as the eye can see.

Very, very tall trees can be found at California's famous Sequoia National Park. The giant sequoia and redwood trees can be hundreds of years old and grow over 300 feet high.

Grease up those skis as, every winter, Colorado becomes one of the U.S.'s busiest ski destinations. Pikes Peak, at the front of the Rocky Mountain Range, was christened "America’s Mountain" for its part in inspiring the words to "America the Beautiful."

There's nothing quite like fall foliage, and the trees along the Connecticut River, from the mouth of the Long Island Sound to East Haddam, will hold the foliage the longest.

Yes, there's Disney, but if you go a bit farther south you'll hit the Everglades, a watery wilderness formed by trees and marshland. It's the largest subtropical wilderness in the US.

The quartz monzonite dome for which Stone Mountain Park is named stands nearly 1,700 feet tall, and the large three-figure relief carving on its side is the largest in the world.

How can you pick just one in this state? If you do, check out the Kilauea volcano where magma comes flying out in solid chunks of ash rather than flowing out as lava, making it not only beautiful but also dangerous.

The "fire rainbow" is a rare phenomenon when ice crystals in the atmosphere capture the light of the sun and refract all the colors of the rainbow. This only occurs in certain areas, like Idaho, where the sun can get to more than 58 degrees above the horizon.

Lake Michigan is the only one of the Great Lakes located entirely in the US. It shares waterfront with Michigan, Indiana, and Wisconsin, but provides drinking water for 8.5 million Illinoisans and looks amazing when it freezes over.

On the shores of Lake Michigan, Indiana's sand dunes rise nearly 200 feet high, the result of the last great continental glacier's retreat about 14,000 years ago.

First photographed in Cedar Rapids in 2006, asperatus clouds have more bark than bite, and usually dissipate within 15 minutes. But they're pretty cool to look at.

Did you know one of the largest salt deposits in the world makes its home about 650 feet underground in Kansas? The formation, which dates to 275 million years ago when the Permian Sea dried up, is an active salt mine today.

Mammoth Caves, the world's most extensive known cave system, has more than 400 explored miles of caverns and a delicate and complex ecosystem.

The bayous and wetlands are active — albeit slow-moving — waterways with native animal and plant life. At 375 miles, Bayou Bartholomew is the longest in the world.

Acadia National Park has pristine views, hidden pathways and trails, and the tallest mountain on the US Atlantic coast, making it a must-see for tourists.

Giddy-up! A barrier island shared between Maryland and Virginia, Assateague Island is famous for its wild, beach-loving horses.

Henry David Thoreau's book, Walden, is based on his experiences living by the intrigue and beauty of Walden Pond.

The biggest of all the Great Lakes, Lake Superior, surrounds Isle Royale National Park, an area home to free-roaming moose and wolves.

Boundary Waters Canoe Area Wilderness spans over 1 million acres in the northern part of Minnesota and is a popular campsite and adventure sports destination.

It has to be the Mississippi River, which effectively splits the country in half. Even though it's beautiful, bad weather can cause devastating flooding in nearby areas, especially around the Gulf of Mexico.

One of the most beautiful in the country, Onondaga Cave is full of dripping stalagmites and "lily pads" formed by mineral deposits in the water.

With a spire that rises 325 feet from the base and is composed of layers of volcanic ash and Brule clay, Chimney Rock National Historic Site is a geological formation left over from the erosion of the bluffs at the edge of the North Platte Valley.

Named for the brilliant sandstone formations that burn red like the sun, Valley of Fire State Park was formed 150 million years ago by shifting in the sand dunes and has tons of petrified wood and 3,000-year-old Indian petroglyphs.

The highest peak in the Northeast, Mount Washington stretches 6,288 feet into the sky and offers views of Maine, Vermont, Massachusetts, Quebec, and even New York.

It might be called the Garden State, but it also has 130 miles of coastline spanning from Sandy Hook to Cape May. The white-sand beaches draw hundreds of thousands of visitors each year.

And now we move onto Niagara Falls, which flushes 3,160 tons of water over its falls every second and produces over four million kilowatts of electricity, which is shared by the U.S. and Canada.

The Blue Ridge Parkway, which runs through the Appalachian Highlands, is one of the most ecologically diverse areas in the world. You need proof? It's home to 100 varieties of trees, 1,600 plant species, 54 mammals, and 159 species of birds.

A rugged terrain eroded by wind and water, and both long and short prairie grasses, the Little Missouri National Grasslands feature colorful and unspoiled badlands.

For thousands of years, water flowed through the valley and cut away the Blackhand Sandstone, smoothing out a walkway for visitors. When they take that walk through the hemlock-lined trails of Hocking Hills State Park, they find cascading waterfalls, deep-recessed caves, and cliff views.

If you want evidence that seawater flooded the Sooner State millions of years ago, check out the Great Salt Plains. The water was eventually cut off from the oceans and evaporated, depositing thick layers of salt.

What is Thor's Well? A huge saltwater fountain powered by the Pacific Ocean. When the surf is up, water shoots upward from the bowl, and then drains back into the opening.

Ricketts Glen harbors 22 named waterfalls (22!) each cascading through rock-strewn clefts in the hillside. The highest? Ganoga Falls, which drops 94 feet.

To get to the 200-foot-tall Mohegan Bluffs,  visitors must climb down 140 steps and over yards of boulders in order to reach the beach. But for the panoramic views of the Atlantic Ocean? Totally worth it.

If you're looking for amazing views of the sunset, head to the lush marshes on Hunting Island. If they look familiar, it's because the Vietnam War scenes in the movie Forrest Gump were filmed along Marsh Boardwalk.

Badlands National Park is home to some of the world's richest fossil beds. Ancient mammal species, like the saber-toothed cat, once roamed here.

Fireflies! For two weeks every summer, a special species of fireflies congregate in Great Smoky Mountains National Park to find mates. It's a good thing they don't mind an audience, because thousands of people visit to observe a naturally occurring phenomenon in which the fireflies blink in unison.

The massive pink granite dome rising above Enchanted Rock State Natural Area formed a billion years ago when a large pool of magma buoyed above the Earth's surface, cooled, and slowly turned to granite. It's an exfoliation dome, meaning it has layers like an onion.

Within a day's drive for more than 70 million people, the Green Mountain National Forest is a popular spot for locals and tourists who can enjoy its watercolor-like landscapes.

Shenandoah National Park is home to wildflowers that bloom all year round, and deer, black bears, wild turkeys, and other woodland animals that roam on the 105-mile path.

Throughout the nearly 1 million acres of Olympic National Park are glacial mountains, cliff-lined beaches, and rain forests such as the Hall of Mosses. Thanks to its yearly 140 - 170 inches (or 12 - 14 feet) of precipitation, a lush green canopy also blankets the area.

Up for a hike? The Appalachian Trail's 2,184 miles pass through West Virginia and wind through scenic, wooded, and pastoral lands.

The Apostle Islands National Lakeshore is an archipelago of 21 wilderness islands along the waters of Lake Superior. And, as you can see, frozen waterfalls hang inside sea caves and create some pretty cool sights.

If you don't think bacteria can be beautiful, Yellowstone National Park's Grand Prismatic Spring will change your mind. Pigmented bacteria lives on the perimeter of the country's largest hot spring, producing a brilliant rainbow effect.