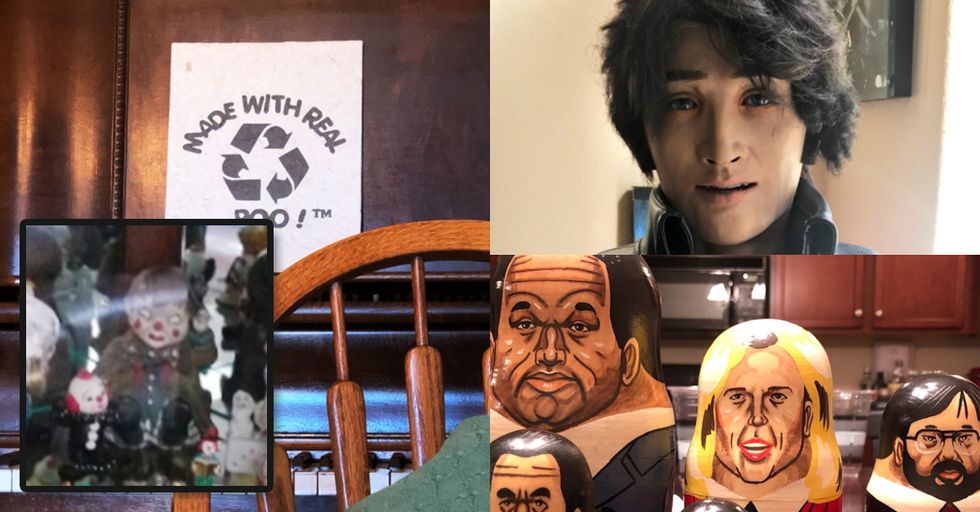 What weird things do you discover at your parents' house when you return for your annual Thanksgiving meal? Figurines, creepy dolls, seashell soap, or strange paintings, perhaps? Jenn, who works for Cards Against Humanity, asked for pictures of weird stuff people found in their parents' homes over the holiday, and the Internet delivered.

"Please show me pictures of weird stuff in your parents' house," she asked and then clarified, "I want to see the seashells in the bathrooms people."

It turns out that people's parents had a LOT of strange, charming, and ridiculous objects lying around their houses.

This one wasn't quite a seashell in the bathroom, but it was in the same category.

I see your seashell soap dish and raise you one lobster soap creation. This guy doesn't even live in a soap dish... he lives in his very own lobster cage. Jenn replied and said, "In a cage even!!!" but people from Maine were quick to set her straight. Tiffany Anne wrote, "LOL @ "cage" It's a "trap" or a "pot" Sincerely, Grew Up In Maine"

Twitter user Amuly21 shared three of the objects in their parents' curious collection.

They are a standing suit of armor, a Shakespeare bust that opens a hidden door when you tilt its head backward, and a larger than life penguin statue. "WONDERFUL TRIO," Jenn approved. Twitter agreed that these objects look like they belong in the house of Batman or maybe the Addams' Family.

Twitter user ZacBruin revealed this truly creepy version of Santa that lives in his parents' home.

If this almost-adult-sized, shoeless Santa robot wasn't creepy enough on its own, take a gander at what it does when you turn it on. Zac added, "You can press a button and in a scary gravelly old man voice he says 'Soak soak soak my aching feet' and the legs/feet move up and down.'"

Deana's mom still has this turtle planter that Jenn gave to her when she was just six years old.

His odd and adorable face with those buck teeth made this quite a distinct Mothers' Day present. Deana said, "I liked him then. I like him now. 35 years together."

Here we were, thinking that everyone on this earth was terrified of clowns. Either Tom's stepdad is immune to this fear or he enjoys being afraid each time he steps into his living room. Tom said, "There isn't one that isn't a nightmare." People were nowhere near finished sharing their parents' quirky decorations.

Twitter user MustachedPat shared this photo of what is supposed to be an Elvis bust.

He found this curious treasure in his uncle's house when he visited for Thanksgiving. But people thought that this guy was a far cry from the King of Rock. Jenn said, "This has to be an anime guy." Someone else said, "It's the guy from the new Final Fantasy." Yet another opinion is that it is actually an interpretation of  Justin Trudeau.

Just when we'd thought we'd seen the craziest stuff, it got weirder.

@jenndangerous @brannonmc Voodoo-eyes pilgrim woman my mom has had for 35 years. Wouldn’t be Thanksgiving without i… https://t.co/9yCv3XbNzd
— Jordan Wellin (@Jordan Wellin)1511491964.0

Jordan shared this picture of a pilgrim and her child, made of corn husks and the spirit of some vengeful Thanksgiving demons, probably. "Wouldn’t be Thanksgiving without it lording over all of us at the table," Jordan said of the dolls, which have been staring out at the table for over 35 years.

This turkey, who may appear normal and kind at first glance is quite frightening after you inspect it closer. Its plaid eyes are piercing and we have questions about its feet. Why are they different? Was this modeled after a real turkey? We need some back-story here.

Lots of people showed themed bathrooms that were painstakingly covered in coordinating decorations.

One person's parents had a bathroom entirely covered in elephant statues. Another person's guest room was covered in hunting paraphernalia. A third was overwhelmed by figurines and pictures of frogs fishing. This one might take the cake, though. It is dedicated to unicycles. "This is one of many unicycle-themed elements of that bathroom," Nick added.

Matt Diller said, "My sister found an OJ Simpson trial themed Russian matryoshka doll set that my grandparents apparently had." Even though many parents shared an obsession for the same kinds of objects, a couple of them were very aware that their spouse's love of certain things was a bit over the top. Leah shared this adorable story about her dad's love of chicken statues. "I'm trying to find my dad's three chicken statues and my mom housed at me to shut up about them bc she hid them," she wrote. "Also, when they were getting new kitchen wallpaper ten years ago, one of the borders in the sample book was chickens and she tore the page out of the book to keep him from seeing it... When he saw the torn page he asked about it and she was like 'don't worry about it' and after a long pause he said in a very serious voice 'is chickens isn't it'. Then after a minute of silent staring he said "that's the one I want.'" When someone asked whether or not her dad got the chicken border, she said, "No but when he didn't I bought him another chicken statue that was holding a chalk board and he just wrote CHICKEN on it in big letters." We love how much her dad loves chickens and how much these families hold these quirky, cute, and hilarious collections near and dear to their hearts.