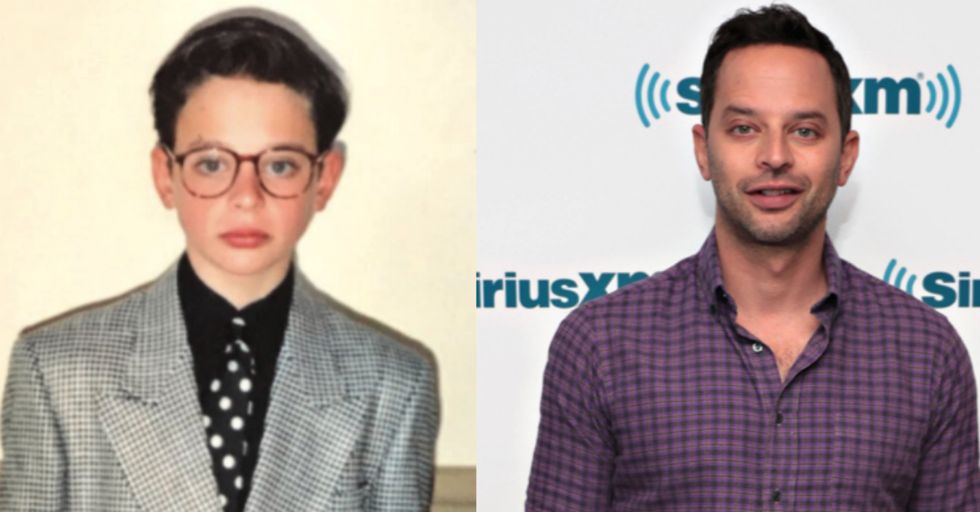 Just about everyone goes through an awkward phase as a teenager. The gangly limbs, the acne, the braces. It's a time that many of us would like to forget, and the thought of posting photos of ourselves from this period online for the world to see is usually the last thing we'd ever think of doing.

But that's exactly what celebrities have been up to since Wednesday, and when you find out why, you'll realize that it's totally worth the humiliation.

During the typical talk show banter, the two came up with the hilariously genius idea to call on other celebrities to post photos of themselves from when they were 13 on Twitter under the hashtag #PuberMe. Seeing our favorite dreamboats looking as awkward as we were at that age? We're so in.

But the idea also has a heartwarming twist.

For every celebrity post, Stephen Colbert will donate money to Hurricane Maria relief efforts in Puerto Rico. And Kroll will match the amount raised. So, sit back, relax, and enjoy these pics of a few of our favorite celebs looking a lot less dreamy and a lot more dweeby. It's for a good cause, after all!

First up is Stephen himself.

What a cute little nerd! When Colbert showed this photo during his show, Kroll commented on the massive size of the tie knot. It turns out that young Stephen had forgotten it was picture day, and the 60-year-old photographer lent him his tie and jacket for the pic. Now the photo makes a lot more sense.

We have to admit, we love the outfit he's rocking in this photo. A polka-dot tie paired with an oversized double-breasted jacket? It's no surprise that he grew up to be a comedian.

That middle-parted hair just screams '90s. As do those round-rimmed glasses. ...and the faint hint of a mustache. Okay, we're just going to assume that this was taken in the '90s.

Jimmy Kimmel gifted the Internet with this beauty.

We only have one word in response to this photo: shorts. Why are they so short?! We're not complaining, it's just an observation. (Alright, maybe that was more than one word.)

Richman, former host of Man v. Food, is one smooth operator in these pics. He's also a total babyface and has barely changed at all since he was 13.

Next up is comedian Paul Scheer.

This ladies man was clearly all ready for a night on the town when this picture was taken. He commented that his suit was "silk on silk" and was like "Cirque de Soleil camouflage". We couldn't agree more.

Although we've got to say, she looks adorable in this photo and not at all awkward. What gives, Silverman? You holding out on us?

Non-celebs also got in on posting puberty pics.

Here's a brave young woman who knew how to rock those Peggy Hill glasses and feathered mullet like a pro. Is it just us, or did little girls in the '90s all look like old women?

This little darlin' is trying out all the trends in her middle school pic.

Did lavender eyeshadow ever look good on anyone? We're guessing not. But those freckles are super cute.

And lastly, this little man who was only trying to help out.

The best time to give yourself a DIY haircut is on picture day. That way you can cherish the memory forever. Now, who's in the mood to walk down memory lane with their own puberty pics?