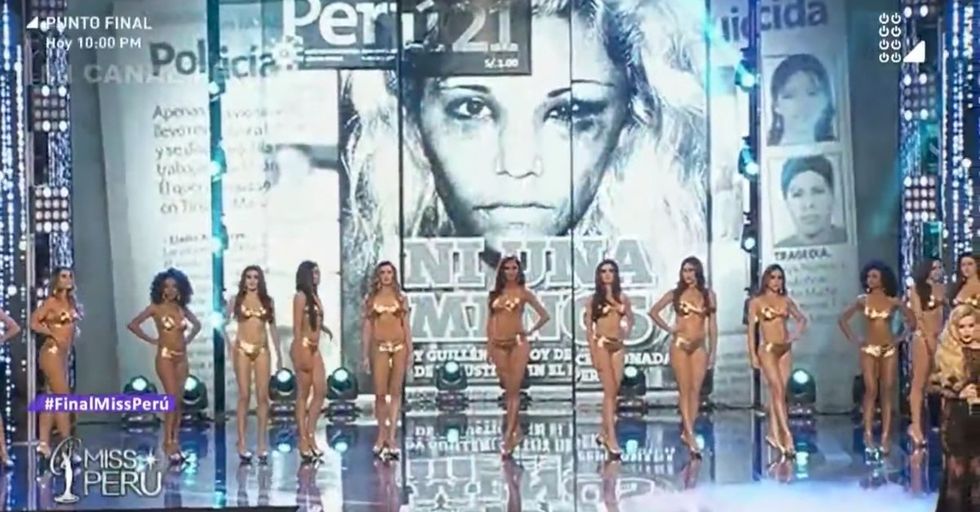 The bust-waist-hip measurements of women have long been hailed as a key to feminine beauty, sex appeal, and status. When asked for their measurements during the Miss Peru 2018 Pageant, however, the contestants each gave an entirely different kind of answer.

Beauty pageant contestants, like models, actresses, and dancers, are accustomed to sharing their stats and measurements.

In a world where it's totally normal, expected, and acceptable to be asked your bust size while onstage and during live television, these contestants bravely changed the conversation. Keeping their smiles firmly intact, with poise and clarity, they answered with statistics about violence against women.

“My name is Luciana Fernández and I represent the city of Huánuco, and my measurements are: 13,000 girls suffer sexual abuse in our country."

In an effort to raise awareness of violence against women in Peru and beyond, the contestants shared stats of a different nature.

“Almendra Marroquín here. I represent Cañete, and my measurements are: more than 25% of girls and teenagers are abused in their schools."

During the swimsuit portion of the pageant, a backdrop featuring news headlines and images about assault and murder flashed behind the contestants.

“My name is Bélgica Guerra and I represent Chincha. My measurements are: the 65% of university women who are assaulted by their partners."

“My name is Juana Acevedo and my measurements are: more than 70% of women in our country are victims of street harassment."

The effect of these "measurements" was chilling and shocking. Exactly what the pageant's organizers were going for.

A movement called #NiUnaMenos, or Not One Less, is a call to end violence against women across Latin America.

Jessica Newton, the organizer of Miss Peru 2018, decided to dedicate the event to raising awareness about gender-based violence. It was a move designed to empower women and draw attention to the startling statistics. “Everyone who does not denounce and everyone who does not do something to stop this is an accomplice," Newton said.

Newton defended the swimsuit portion of the pageant, which is often criticized as objectifying women.

She reasoned that women should be treated with the same respect and dignity regardless of what they're wearing. How often are rape victims criticized for how they were dressed? Newton's point is that a short skirt, a low-cut blouse, or a sexy swimsuit are not invitations. She explains, “Women can walk out naked if they want to ... If I walk out in a bathing suit I am just as decent as a woman who walks out in an evening dress."

This can't have been a comfortable or easy thing for the event organizers or the contestants to do! Well done, Miss Peru! These are exactly the kind of "measurements" we need more of.