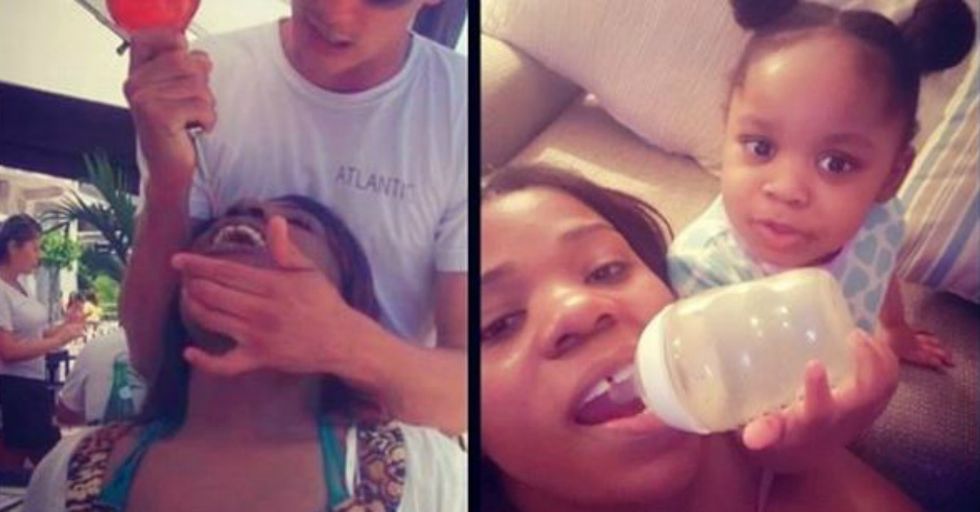 Being a parent is not for the faint of heart. You're up all night feeding and changing diapers, trying in vain to make them stop crying, constantly being pooped, peed, and spit-up on, and that's just when they're a newborn. Once they reach the toddler stage and become mobile it's a whole different ballgame.

Or so I'm told, that is. I must admit, I'm not yet a parent myself, although I am, currently, nine months pregnant. So the end is near for me, and the following 30 photos show just how much my life will change once this adorable screaming gremlin is unleashed into the world.

Parents: look at these photos and know that you're not alone. Non-parents: peruse these pics and see what your future holds. And try to appreciate all those sleep-filled nights and ability to put on a shirt that's not covered in baby vomit while you can.

From delish drinks to diarrhea.

Look at that classy, perfectly put-together young lady enjoying her Cosmo. ...and look at her now! Let's hope she still gets a chance to make it out to the bars every now and then, sans-children.

From crowded bars to crowded beds.

Hey, at least she's sleeping! My guess is that it didn't last very long, though.

From sparkling cruises to cutting-off circulation.

Not so happy-go-lucky anymore, are we?! At least she's able to close her eyes and think back to her yacht-cruising days when times get tough.

This poor pooch. The innocent smile in the first photo proves how oblivious he is to what his life is about to become.

From trips to Rome to a cluttered home.

Those days of jetting off to new and exciting destinations at the drop of a hat are over. But at least their home is filled with twice as much love!

From drinking buddies to pumping pals.

At least these two Mamas have each other. Because who wants to have milk squeezed out of their boobs by a terrifying machine all alone?!

From sexy selfies to mouth-agape mornings.

She still looks beautiful in the "after" pic. Just tired. Very, very tired. Also, that facial expression really runs in her family.

From perfectly made-up to a perfect mess.

The photo on the right is exactly what happens to my hair when I don't wash it or brush it for several days, so I know what I have to look forward to in a few short weeks.

I can't even tell how many kids are on top of him in the second pic, but it looks like a lot. And his facial expression days the same.

From the happiest place on earth to the crappiest.

At least he'll be able to expose his children to the magic of Disney once they're old enough! Of course, he'll also have to deal with screaming tantrums, which tend to make the Magic Kingdom a whole lot less magical.

From dancing queen to double doody.

Having twin infants seems like being forced to take care of two drunk people who are constantly whining about something and ruining all your favorite stuff with their uncontrollable bodily functions.

From pumped up to pretty in pink.

Honestly, which one of these guys would you want to hang out with more? The fact that he's secure enough with his masculinity to play dress up with his daughter in public makes him look about 10x stronger than he does in the first pic.

Lost the tee, kept the drink, gained a baby

The fact that she's still rocking the drink while carting around her kid gives me hope that I'm not in for a life completely devoid of fun. But I'm guessing her idea of "wasted" now means something a tad different than it did before.

From beach babe to half-dead.

She's in almost the same pose but somehow seems about a billion times less relaxed in the second pic than she does in the first.

From well-suited to poopy patrol.

The puffy eyes and dark circles are telltale signs of a new parent. Oh, and the ridiculous amount of dirty diapers. Those, too.

When you find a pose that works, you stick to it. And that leopard-print baby is a great accessory.

Ditched the pearls in favor of some flashy new accessories.

Hey, anything your kid gives you is an item you'll cherish forever, right? Pearls are so last season, anyways.

Just swapped out one type of onesie for another.

I'd be lying if I said I wasn't jealous of her adult-sized onesie. And her giant bottle of wine.

Upgraded to a much smaller but no-less-terrifying opponent.

This kid is clearly a UFC champ in the making. At least this Dad already has some good defensive moves he can whip out at a moment's notice.

Who knows, maybe being constantly puked and peed on is this Mom's idea of "living the dream". To me, it sounds more like a nightmare.

From carefree to held captive.

The pinned-back ears and tail-between-the-legs make it seem as though this dog may be less-than stoked about it's pint-sized owner. In fact, he seems to be re-evaluating all of his life choices up until this point in the second pic.

From dazzling smile to deer-in-headlights

This woman has seen some things since that first picture was taken. And by "things" I mean lots of projectile diarrhea and snot bubbles.

From a tailored tux to all tuckered out.

It's hilarious how this Dad's 1,000-yard stare is juxtaposed with his infant son's completely chill expression. He knows exactly what he's doing to this poor, poor man.

From one type of head accessory to another.

Sure, that hat is pretty cute, but I'd say the accessory on the right is WAY cuter. Although it probably comes with some pretty severe neck pain.

This one is actually pretty adorable. It's nice to know that they still find time to snuggle together even with this new addition to their family. But they'll never get control of the remote control again.

Traded in one princess for another.

This may not have been the princess he always imagined he'd end up with, but I'm betting he's totally okay with that. I'm also betting he hasn't gotten a decent night's sleep since she was born.

Keep smiling, no matter what life throws (up) at you

This guy's got the right attitude. Sure, there's vomit on my face right now, but who cares?! And yes, my child clearly did it on purpose, but big WHOOP! It could have been worse, right? Right?!

This strappy black bra is much less fun.

So apparently, breastfeeding doesn't feel good sometimes. And this woman's agonized facial expression says it all. She's probably also mourning the loss of being able to wear skimpy midriff-bearing tops in public.

New Year's Eve looks a lot different when you have a newborn. Instead of staying up until midnight, you're passed out on the couch by 8 pm and completely hammered after just a half a glass of champagne.

From day drinking to dead inside.

At least this woman got to enjoy her time in the sun before having kids turned her into a shell of a human being. Okay, that might be a tad dramatic. Having children is one of the most beautiful and meaningful experiences you'll have in your lifetime. But man, can it suck sometimes.