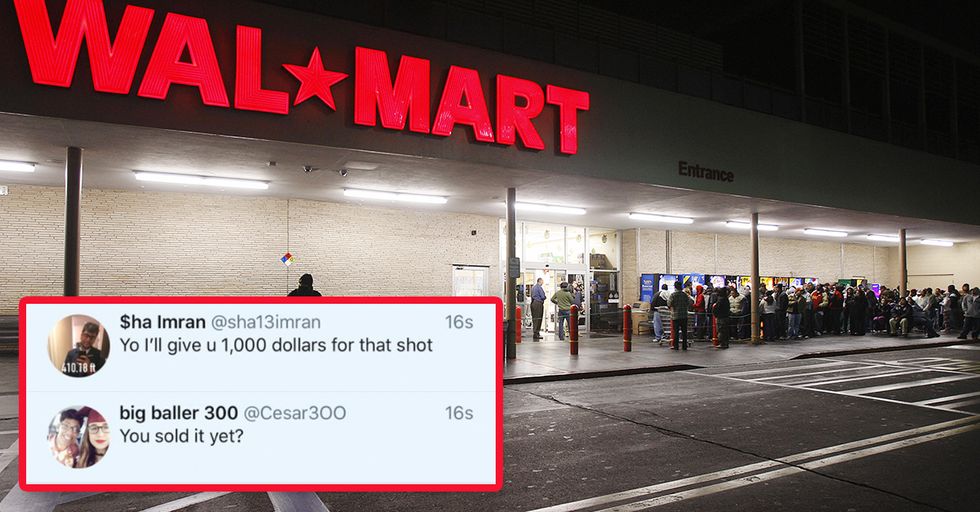 Thanksgiving is wonderful, but for some people, the day after Thanksgiving is the real holiday. That's when stores put a bunch of stuff on super sale for Black Friday. Those who are exceptionally dedicated to shopping (and who apparently hate sleeping) will wake up early to get in line — but once they get inside the store, it's kind of a mess. Huge crowds, crammed carts, and frantic grandmas fill the aisles and it can quickly become overwhelming.

No one can blame you for trying to get a good deal while you're out shopping for the holidays, but there has to be a better way, right? That's what one Walmart employee thought. He jokingly offered a solution to the crazy Black Friday crowds and soon realized just how seriously some people take their shopping.

For reasons that many of us will probably never understand, Black Friday shopping is a huge deal.

Come Friday, people from all over the country are going to wake up before the crack of dawn in order to get in line and buy stuff at various big box stores.

Apparently, it's because of the deals.

And if you're a Black Friday shopper, more power to you! We're huge fans of great deals, too! This year, though, the Internet may have gone too far with tips to save money on Black Friday.

He offered to sell his WalMart vest for $100. And it wasn't to make any kind of fashion statement. According to the poster, wearing the vest would allow you to walk into a Walmart, grab whatever it is you're shopping for, and walk right out. No questions asked. After all, who would question an employee moving product?

The sneaky idea caught the attention of the Internet in no time. People soon began making their own Walmart uniform offers.

This person even included a free name tag and hat to complete the look. What could possibly go wrong?

Not interested in playing the part of a lowly floor employee? No problem. This person was offering their manager vest.

$250? That's downright reasonable for all the money you'd save if this harebrained scheme actually worked. We're guessing most of these people were posting their uniforms as a joke. But then the offers started coming in...

People were actually trying to buy his vest! Come on! Have you no moral compass, folks?

The offers weren't limited to Walmart, either.

OK, if you're going to try to sneak into a retail location to take advantage of Black Friday sales, maybe Best Buy is a slightly better option than Walmart.

This is probably a pretty good deal, but don't bother springing for the red shirt and khakis. Just grab them from the racks! That's how this works, right?

Apparently, Walmart has caught on to the scam.

Also, we hate to rain on the Internet's parade and everything, but if anyone went through with this plan that would 100 percent definitely be stealing, which isn't cool.

But don't despair! You can still get out there and enjoy Black Friday at the stores. OR...

Just stay in and get comfy at home! You can do all of your shopping on the Internet.