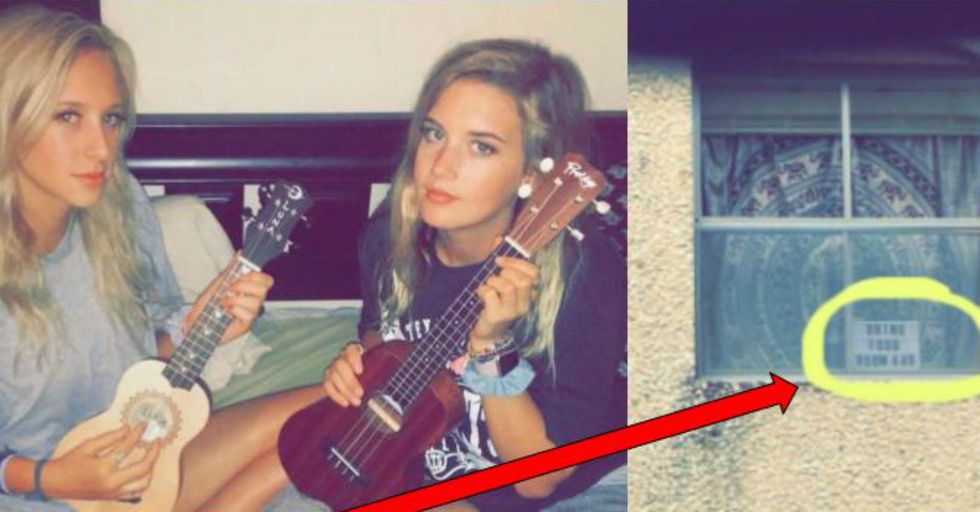 College kids are a) often broke and b) sitting around with a LOT of time on their hands. So it shouldn't be too big of a surprise when students think up some very clever stunts to get what they want.

When these two girls found themselves hungry and strapped for cash, they did what any good college kid would do.

First, let's meet the culprits behind this genius idea.

This is Emma, a college student from Texas.

And this of course, is Emma's roommate, Madelynn.

(Not to mention their ukuleles, Lola and Lucy.)

Like many college students, they are broke and hungry (and maybe a little lazy).

But these girls came up with a creative solution to their "problem". They had the genius idea to put up a sign in their window requesting someone bring food to their dorm room.

And believe it or not, they actually got a response.

A group of guys in the dorm across the way put up their own sign asking the girls what kind of food they would like.

And being the smart girls they are, they weren't picky.

A couple of girls after our own hearts, right there. Any food, all the food. But the girl's response prompted a hilarious response from the boys.

The guys wanted to know exactly what they were getting into.

Only jokingly, of course. It could've ended there, but the girls came up with an even better reply.

And is that an emoji on the bottom there? Those boys better bring some lobster and some foie gras or something for that Grade-A clap back!

The guys were flustered. Like typical college-aged boys, they could only reply with this.

NOW KISS AND GET MARRIED.

But Emma's original tweet is currently sitting at well over 100,000 retweets. Which is a lot of freakin' retweets (R.I.P. Emma's phone).

But to be honest, Madelynn is probably glad her Twitter notifications haven't been totally destroyed like Emma's. I know you're probably wondering if the clever girls ever got their food. Well, the boys had one last response.

Emma and Madelynn put up a sign in their window asking when dinner was.

But the boys demanded a million RTs before they would go out to dinner, which raised more than a couple of eyebrows.

The girls still had no food.

And some questioned the legitimacy of the whole thing. But we want to believe!

Some wondered how they had identical signs.

Which is a valid question.

Most people were just bummed that the girls never got their food.

I guess chivalry really is dead.

Now, due to their newfound fame, Emma and Madelynn have had to put up signs on their door to keep people from knocking.

Unless they have food, of course.