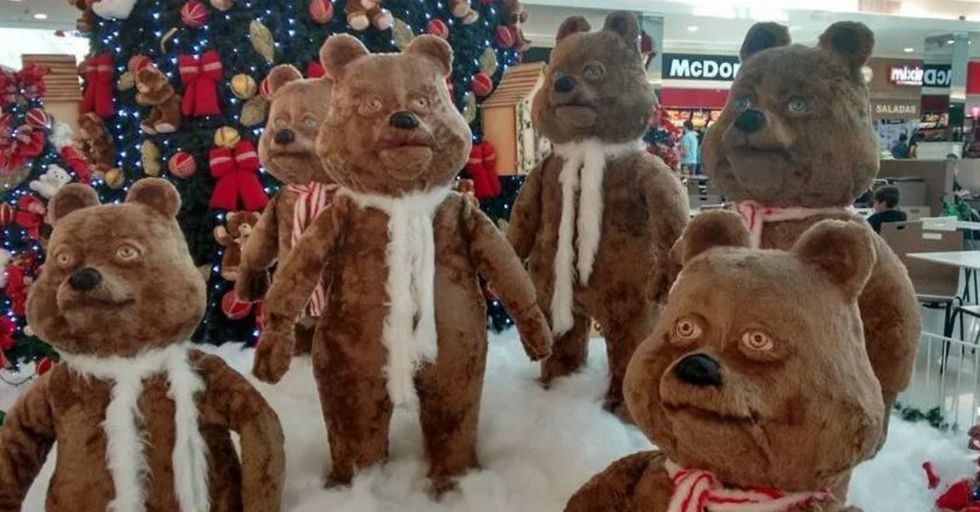 Christmas Fails Guaranteed To Get You In The Holiday Spirit

It's the most wonderful (and expensive) time of the year! The holidays are here again, and the magic of the season brings joy in the hearts of children and adults alike. There's a crisp, refreshing chill in the air, sparkly lights make everything brighter and just a little more magical, and you're forced to get people gifts who you see less than five times per year. And while it's filled with warm, fuzzy feelings (and a ton of alcohol), it's also the best time of the year to enjoy some hilarious Christmas fails. From obscene decorations to inappropriate gift wrap to festive fashion (check out this holiday sweater that features a snowman enjoying a different type of snow), these Christmas fails are guaranteed to get you into the holiday spirit.

Seriously, though, is it too late to add that sweater to my holiday wish list? What do you mean, Walmart had to pull it from their stores after people complained?!

Woah, Santa. That is NOT okay. What would Mrs. Clause think?!

To be fair, this is probably what every palm tree looks like when you try to decorate it for Christmas, so let's just take a moment to appreciate those poor Floridians during the holidays. That can't be easy to look at all day long.

It's supposed to say "10 Flickering Lights" but the font makes it look like something...else. Needless to say, you wouldn't want it on your tree.

Oh, the humanity! Someone help this poor guy! And yet, through it all, he still manages to keep a smile on his face. So brave.

Even the ornaments look embarrassed to be a part of this Christmas debacle.

Yes, someone actually thought that this would be appropriate for a children's hide-and-seek book. Nothing says "holiday fun" like a creep spying on women while they undress!

I'm actually impressed that they were able to fold something so lifelike from cloth napkins. I'll have to remember this the next time I throw a bachelorette party.

Sure, this is actually just a design fail where Santa's eyelashes were put on the inside of his eyes instead of the outside, but I like to think that he's actually just really, really tired. The holiday season will do that to you.

Whoever thought up this design is a genius. "You know what would make plunging your toilet even more enjoyable? Getting stabbed in the hand by fake Christmas tree branches."

This looks bad. But maybe you're supposed to "believe" that this is not, in fact, a mug that is covered in blood.

I honestly cannot imagine a reason for this to have been created. ...unless it's in front of a frozen yogurt stand?

At least in our house, it doesn't feel like Christmas until we hang the disembodied toe on our tree. I look forward to it every year.

This just looks uncomfortable. I mean, I get what they were going for, but...yeesh.

No, it's not just you. Those lights look exactly like underwear. Giant, sparkly underwear.

These would make a great stocking-shaped stocking stuffer. Or, why not use them to add some pizzazz to your tree-shaped Christmas tree?

These bears have seen some stuff. I would not want to be the custodial worker that has to vacuum these things at night when the mall is empty.

FYI: The fingers on this cup were drawn on to make it look like...that. McDonald's isn't that clueless.

So, either Santa produces syrup or he's just peeing on a stack of pancakes. Either way, I've lost my appetite.

So close. Although they didn't specify that it would be a "tree-shaped" tree, so can we really complain?

You might want to try going easy on the cookies, Santa. Plus, all that milk has got to be brutal on your digestive system.

The look on Santa's face says it all. Who doesn't love a nice, warm hug during the holidays?!

This had to have been intentional, right? Sure, the words "jump for joy" are fine on their own, but when they're placed on a bridge it takes on a whole new meaning.

You're not fooling anyone, Lindt. Stop trying to pass last season's chocolate Easter bunnies off as reindeer.

This gift bag should come with an NC-17 rating. For the record, reindeer paws do NOT look like that.

I'm guessing this artist didn't intend to create such an unsettling image, but there's something about Santa with a beard filled with ghost children that just rubs me the wrong way.

Just look at this darling scene! There's nothing obscene going on here at all!

Seriously, who approves these things? Everything about this looks wrong to me.

And lastly, this school-inappropriate sweater

While this was a pretty epic screwup, after seeing all these other phallic yuletide fails, it could have been worse. Much, much worse.