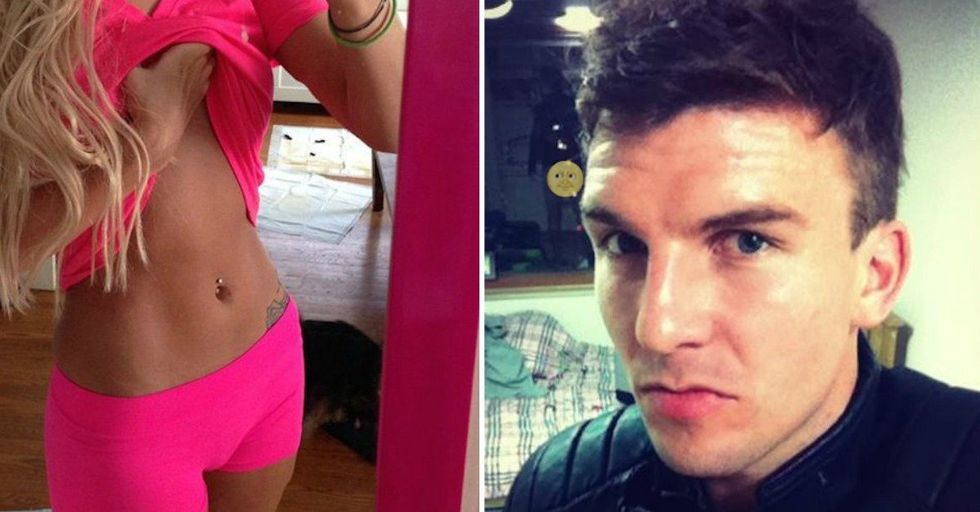 It should go without saying that if you're going to take a selfie, you should be aware of your surroundings. But people, however, are often more concerned with their image than they are with what's going on around them.

That can lead to some very awkward moments that will forever live on the Internet for eternity. Let this serve as a warning — unless you're a vampire, reflections will always exist.

It's totally normal to sleep with a scarf and giant hoop earrings, right?

"Us" meaning her and her phone, apparently. "Bae" might be her split personality, which is troubling for a number of reasons. Let's hope she's able to get a good night's sleep without "Bae" waking her up in a panic.

Who the hell decides to selfie while they're pooping?

She's smiling because she just lightened her load. Have you ever seen someone so happy to be on the toilet? Perhaps you have, but that person almost certainly wouldn't want the photo to be shared for public consumption.

At least this one seems like it was done intentionally. It's an optical illusion, sure, but in a situation like this, most people would simply opt for privacy over cool and clever photo-framing techniques. She seems happy with the result, though!

"It is kind of drafty in here." We included a smiley to preserve your delicate sensibilities from the "bare" realities of the situation. Normally when pants are off, people have happier expressions than this guy does.

Subtlety is not everyone's specialty.

He's probably just checking out her belt, right? Maybe she was trying that piece on as well. Being an upstanding employee, he was just ensuring a proper fit. It's somehow still not as bad as what this next guy was checking out.

Yeah, he's checking out something that you should shield the kids on the subway from.

The look on his face sells it though - such intensity and focus. This is a guy who doesn't take his "entertainment" lightly. Though he should probably avoid consuming it on such crowded places. Even if it's a cartoon, it doesn't seem kid-friendly.

Trains are the worst place to try and be sneaky.

Busted. It's possible he's just sharing his "media" with the rest of the train, but he's forgetting a cardinal rule of public transport — you never, ever, ever have privacy. Don't pretend that you do. You just...don't.

I love this couple because they're so genuine and real.

Aww my boyfriend is so sweet! Sneaking in shower shots of me hehe. - UnsetJelly

Poor guy is doing his damnedest to look tough. And if there's one thing that just immediately kills all your tough credibility, it's asking your mommy fow hewp taking a picuwe.

Is that mirror on the floor?

You can forgive this potato chip-encrusted princess for not accounting for the mirror in this "accidental" selfie — it's on the floor. Who puts mirrors on the floor? Van Helsing when he's hunting short vampires?

Um, ma'am? There is an incident going on behind you.

That awkward moment when you're trying to take a selfie and a mother decides to beat her child with her sandal. - PolarLight

That cat is in for a world of adventure.

My friend got his tux in and sent me a pic. I had to bring it to his attention what was going on in the background. - colski08

Without the mirror, I might've thought he was in a cool fast-casual burger joint.

The sleeping giant has been awakened.

I would bet my entire life's savings that this kid got messed the hell up 0.05 seconds after this shot was taken.

There's that guy Van Helsing was looking for.

Anyone else have this problem when taking mirror selfies? - Jezbot404

My man went all in on the faux-bae caught me slippin' pic — he studied the others who failed before him. The giveaway is having one hand off-frame. Bae would never wait for you to get one hand off-frame before they snapped a pic of you slippin'.

You ever read the book "Cujo"? Not sure why that just popped into my head. Anyhow, good book. Give it a read.

Let's be honest here — this selfie would've been real boring if this dog didn't take matters into their own hands (paws?) and give it a little sex appeal.

Did that guy know there was a picture being taken?

If you'll turn your attention to the top right photo, you'll see either the guy on the team who so hates being sweaty he hops into the shower before they even do the team selfie, or the infamous Nude Ghost.

"C'mon babe, I'm just trying to stand next to my car!"

My girlfriend is always trying to sneak pics of me! - eglesworth

This is too messy.

The selfie Olympics have gone too far. - @sierraasofar

This mom be creepin' in this selfie. Do we think the daughter is in trouble? Or that the mom wishes she was invited and is lamenting her wasted youth?

No shade here — if you want to shop for your personal products online, go for it. Just double-check that you're not accidentally displaying those purchasing preferences for the entire internet in your glasses selfies.

Oh, I've had nightmares about this.

Listen, I want — with all my heart — to think that this is a mistake; a person who tried to take a picture of themselves without realizing there was a mirror or reflection they missed to screw it all up. But I do think it is a monster, and we must all prepare to fight.

Got a real Tarzan over here.

Sometimes, the sequels are better than the originals.

Sure, this looks like a muscle-man getting a picture taken by his grandma, but what if — and stick with me here — what if this is that same scrawny little string bean from a few pictures ago and while his mom aged, he pumped himself up?

Who are you trying to kid?

This seems like such a strange thing to make up — no one is going to have any feelings whatsoever towards the fact that you're in traffic. Just take the selfies. Don't lie about what you're doing while you're taking the selfie.

There was a floor to stand on right there...

My only question is: is she coming up from the toiler or going back down?

I see the badass photo you were going for, and honestly? You're like this close.

Check out my gun. - clashcow

Either this friend snuck in an expert-level photobomb, or she has been trapped in the mirror dimension by one of her many foes.

Who among us will ever forget the first time we learned what a mirror was? This cat started out unaware of those reflective surfaces, and then, it had a rude awakening.

We're having a lot of fun here rippin' on tough bros who need their moms to take mirror selfies for them, but to be honest, it is very sweet and these moms are the best.

I honestly don't know which of these two were trying to snag a photo of themselves.

I am now much more interested in Hyundai Matchday Saturday.

In all the years Hyundai's been a company, has no one ever flipped over the logo and said, "uh, guys? This very clearly says 'nude' and it would not be difficult to change"?

This breaks my brain.

What is she trying to take a picture of? And how is she doing it? And is the mirror working correctly? I like to think of myself as a pretty smart person, but I have no idea what's happening here, mirror- and camera-wise.

Parent of the year, for sure. Meanwhile, the girl probably fears that she's looking 18 years into her own future. Poor thing probably just wanted to zip up her mom's dress and hear about her mom's quiet night with friends the next day. Oh well. No such luck.

Plot twist: His prom date is the one taking the picture. Man, how long do you want THAT picture to haunt your high school and adult life? Hopefully, it doesn't see the light of day. For the subject's sake, of course. Comedy dictates that this gets shared as much as possible.

Nothing says “sexy" like a whole bunch of dog turds on the floor.

That's the most unfortunate reflection of all time.

His facial expression is hilarious though, at least he's owning it. That said, he should own it, because it's VERY hard to believe that stain is anything other than exactly what it looks like. You can choose to ignore your eyes on this one, but it's not gonna be easy!

Somehow this magazine even failed with a fake reflection.

That's really the best they could do? Yikes. Photoshop got away from some photo editor, and the result is a very unpleasant subliminal message that doesn't exactly jive with "island paradise." Here's to hoping that the paper issues a "retraction."

Angles are important when taking selfies.

Finding the most flattering angle of yourself can be tough. This girl nailed it. The up-the-nose vantage point is always the one the fellas drool over. Fortunately, a simple cropping can fix this. Unfortunately, it's far too late for that.

Tables are an underrated danger when it comes to reflections.

Uhh. That's... unfortunate. It also looks very uncomfortable. As an aside, it should be a crime to take photos of strangers when they're eating, especially at the likes of a Chipotle. In fact, that may BE a crime.

Huh, nevermind. His beard says "Let's chop some wood and drink bourbon." His pretty sundress says, "Never mind, let's just snuggle and drink tea." Ladies, you CAN have it both ways. And now to meet his brother...

He has to be related to that last guy, right? There's simply no other explanation.

OK, that has to be a picture of him when he was younger hanging behind him, right? It just has to be. And that is just terrific.

Welcome to your new favorite Internet sensation: People selling mirrors online. They go to extreme lengths in order to get a photo of their mirror that isn't completely strange. And they fail every time.

Come on, wouldn't you want to watch yourself as you use a public toilet? What's that? You wouldn't? Hey! Where are you going?

Let this be a lesson to you: Never try to install a mirror. You may just lose your head. And not for another guy who's just trying to sell a mirror...

How much do you think he's asking for it? Regardless of the price, it's gotta be a good deal because the mirror appears to contain the entire universe.

I like how many steps this guy took to ensure he had a good picture to post. He brought the mirror outside in natural light. He placed it opposite a nice, rustic-looking fence. And he took off his shirt.

"Get out of here, Alyssa! I'm trying to sleep!" "But Grandma! Yours is the best mirror in the house!"

It's...right there on the mirror. Should we tell her? Somebody should tell her, right? It's about time she learned the importance of context clues.

Once again, nobody wants to watch themselves as they use the restroom. I'm sure I won't have to ever say that again. Oh, wait...

Come on, people! Have we learned nothing?!

Believe it or not, this is actually what the uniforms for the National Guard of Russia look like in the mirror. Seriously. Did no one think to look in a mirror while they were designing these?

It's not often you get to see exactly what your future children might look like. In this case, it's...not pretty.
20%