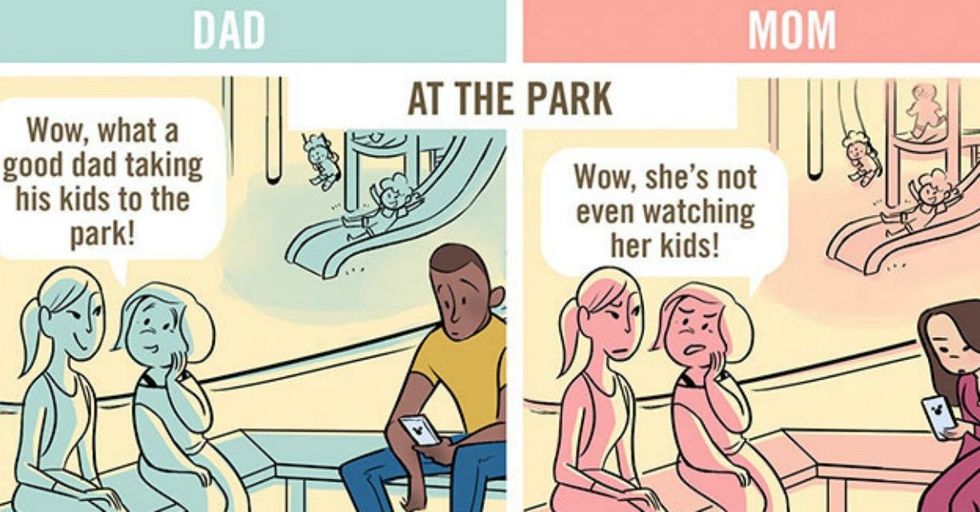 There's a comic from Babble that has been shared more than 43,000 times and counting because parents everywhere can relate to it all too well.

It shows the way moms and dads may often be received when they're in everyday scenarios — and for some, it's a painfully accurate portrayal of a frustrating double-standard.

It's not going too far out on a limb to say that moms and dads get different treatment when they're with their kids.

There are innate differences between how men and women raise their kids — how deep you want to dig into those differences is a matter of preference and, more often than not, some controversy.

As the stereotypes go, dads are the "fun" and "clueless" ones.

They're around for the good times and important caregivers but rely on mom to lay down the law and set boundaries.

Meanwhile, moms are the ones who set the structure of the household.

Maybe this is borne of straight-up sexism, or perhaps because, traditionally, moms spend more time with the children.

Honestly, neither stereotype is too flattering, nor too honest, a portrayal of who moms and dads really are.

But to ignore the stereotypes is to allow it to go on without scrutiny, which benefits no one. We have to discuss the unpleasant things in order to address and fix them.

Fortunately, people ARE addressing the issue. Further, they're doing so in brilliant ways that make the discussion feel less like work.

In fact, one comic online has actually come to notoriety by pointing out the double standards in a fun and playful fashion that doesn't diminish the weight of the message. See their awesome approach and the Internet's thrilled reactions on the following pages!

At the doctor's office:

Getting your hair cut:

At the grocery store:

Out with your friends:

More than 1,400 people left comments and shared their own experiences... They're overwhelmingly positive, but also incredibly eye-opening, as you'll see!
What do you think? Are mothers viewed more critically than fathers, who are often given credit for simply showing up?