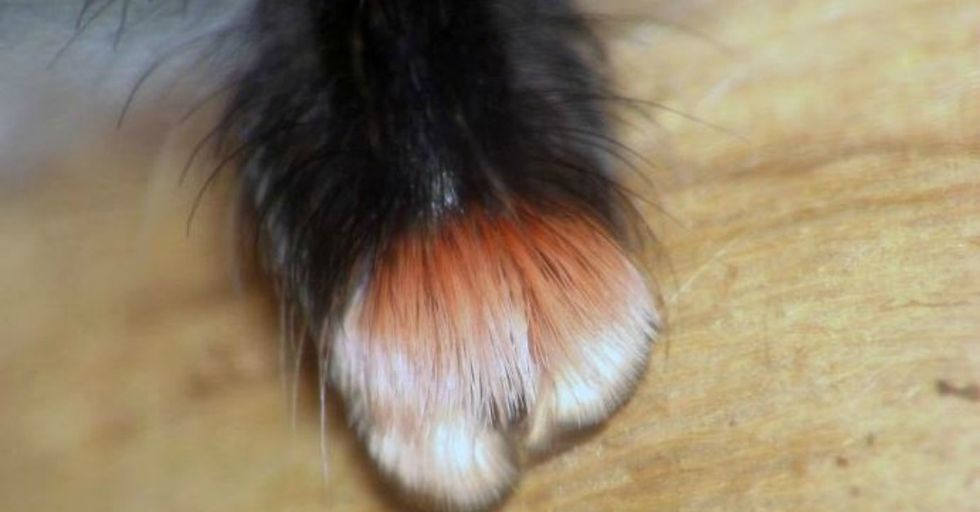 These Cute Animal Paws Are NOT from a Creature You'd Expect

There seems to be an unending supply of cute animal pics on the internet — cats snuggling with puppies, baby goats clumsily learning to walk, babies riding on dogs like horses — we just can't get enough! And when a new adorable creature comes on the scene, the Internet loses its collective mind.

So that's why we wanted to be the first to tell you about a darling new addition to your favorite cuddly creatures! These fuzzy paws have been all over social media. But what exactly are they? Can you figure it out?

These sweet little paws have been taking over social media.

They were first posted by Twitter user Rebecca Whetstine on September 16 and have been retweeted over 250 times since. We just can't get over how soft they look. Don't you just want to pet them?!

The spiky fur is seriously adorable! And those little paws! Where can we get one of these? Asking for a friend.

They look like a mix between cat paws and horse hooves.

Could they be some type of cat/horse combo? How cute would that be?! A mini horse you could cuddle with on the couch? We're so in.

And the coloring of the fur is SO pretty.

They look like gorgeous creatures. If only we could just see a little bit more, then we'd be able to figure out what they are...

Have you figured it out yet? Okay, so we've been pretty coy so far, but when you find out what these things actually are, their paws might seem somewhat less adorable...

SPIDER. PAWS. Those things that make you scream like a lunatic when you find one in your shower? Yeah. These are their feet.

Honestly, we are pretty surprised by how cute their feet are. But that doesn't make up for the rest of them. Just thinking about spiders makes our skin crawl.

Seriously, how enormous is this spider for their paws to be this big?!

Sorry Jana — this will not help us be any less terrified of spiders. But we'll try to imagine their fuzzy little paws as we're smashing them to death with a newspaper.

And the little claws?!

NOT OKAY. Why would you want that thing touching you?! We totally take back all those "soft and fuzzy" comments.

This guy has the right idea.

Has the world gone insane?! These are SPIDERS, people. They're our mortal enemies.

We live our lives in fear of these creepy crawlies!

And might we remind you that, along with these adorable paws, spiders also have EIGHT EYES. Some even have as many as TWELVE EYES. Just keep that in mind the next time you think about keeping one as a pet.

All jokes aside, if these pics can result in a few less spider deaths, we suppose that's a good thing.

We'd just prefer to live our lives as spider-free as possible. What do you think? Do these pics change the way you see these creepy arachnids?