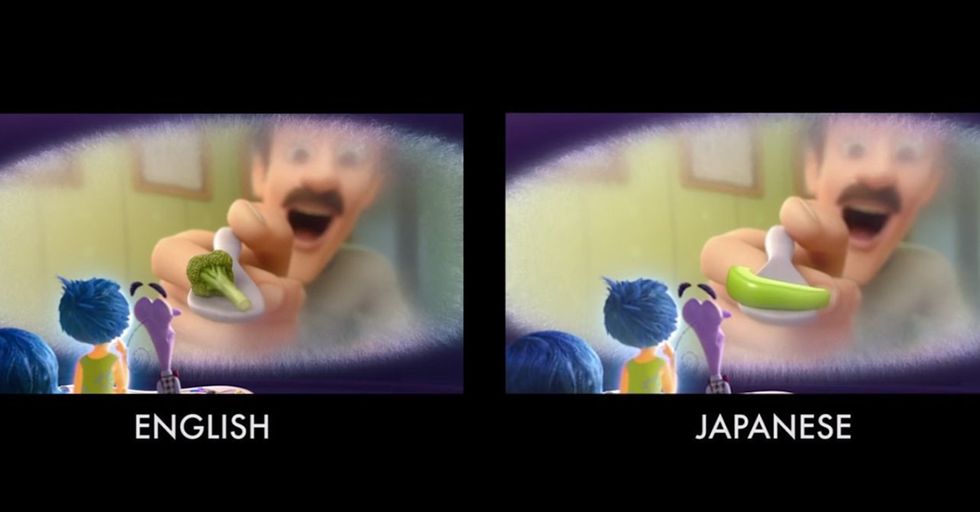 Pixar makes some of the biggest, most beloved movies not just in the United States, but the world. But to reach people of different cultures and countries, they often need to make changes, big and small, to suit different audiences.

You might not have even thought about it before, but what works in America doesn't necessarily work (or make any sense) in other markets, so the animators, writers, and producers have to make lots of changes to suit others. Take a look at how your favorite Pixar films get tweaked...and why.

Obviously, language differences exist from country to country, so the quickest thing you'll notice is the films in, say, a Russian market are in...Russian.

But you'll also notice that there are written words not just in the title sequence, but throughout the film. As you can see here, the title of a book from Up! is changed from English to French.

But sometimes, too many changes need to be made.

While this bottle reads "Paradise Falls," in non-English-speaking markets, it just displays a picture of Paradise Falls so it doesn't need to be translated over and over. That doesn't work for a book because, as we know, all books have titles on the front.

These cupcakes from Monsters Inc. read "Be my pal," in English countries, but just had a smiley in other markets.

In Inside Out, the dad was daydreaming about a hockey match, but in many countries, hockey isn't popular, so it was swapped to a soccer game instead.

But it's not ALWAYS that simple.

Sometimes they'll stick with the lesser-known sport if it's important to the story. For instance, a Mexican audience might not love hockey, but they're close enough to the U.S. that they understand a Minnesota family would play hockey. In the Philippines, it might be easier to just switch it out for soccer.

The same goes for food.

In Inside Out, Riley is fed broccoli, which she hates. But in Japan, kids don't hate broccoli, so they swapped it with something they DO hate, which is green peppers.

These changes add up.

Pixar movies take a long time to make (five-seven years, actually), so the animators and producers need to think way ahead, because it's hard to go back to make these changes once the film's been drawn.

Pixar's known to obsess over detail.

The entire animation staff studied fish biology to see how they swam in Finding Nemo and Finding Dory.

But that attention is why they're so widely loved.

These tiny changes make the movies more resonant to people from all over the globe.

To learn more on the changes, check out this illuminating video.