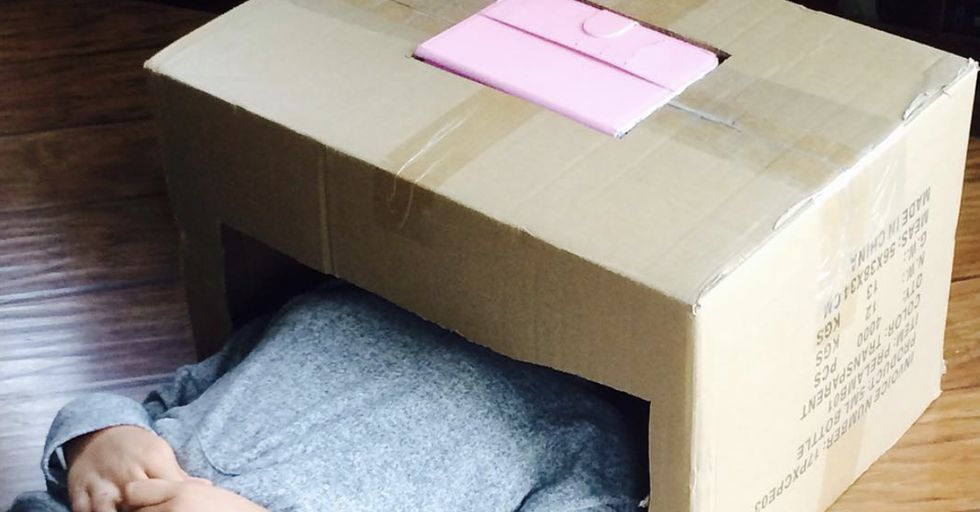 These Genius Kid Inventions Prove the Future's in Good Hands

It's easy to look at a kid and think, "Eh, I'm way smarter than them."

I mean, you probably have more formal education than most children, so it's kind of a given. It's also kind of a weird thing to feel superior about, but I can't tell you how to live your life.

However, there are some kids out there who are honestly pretty darn brilliant. Some of them invent life-saving devices or come up with genius ways to help the environment. Some save their pennies and donate money to people in need or other worthy causes. And some simply look at an unfortunate situation, shrug their shoulders, and say, "Whatever. I can deal with this." It's the third type of kid that we're focusing on today. These kids were presented with a challenge, then solved the problem handily.

Is it weird to want to grow up to be like these kids? 'Cause I kinda do.

I remember sitting my parents down and giving them a very thorough presentation about why I should be allowed to hatch an egg from the fridge so I could have a pet chicken. They did not go for it. I should have just built my own chicken.

I've built plenty of structures out of Lego bricks, but none of them have actively solved a problem in my life. This kid is definitely going places.

Sure, you could buy a wireless speaker for your phone. Or you could just raid the recycling bin. Up to you!

Pencil grips were such a hot commodity when I was in school. If I had thought to use Nerf bullets, I would have been considered a genius.

I would absolutely buy something like this for my phone. No more dropping your device on your face! And your arms can relax! I'm totally sold.

Nobody likes a soggy spoon. But who do you know who's actually done something about it?

Put your coat on!

I volunteer at a preschool and let me just tell you — it takes kids forever to put coats on. I'm going to start showing everyone this video.

That's using your head! Or your behind, I should say.

The good news is that your kid is brilliant. The bad news is that life is probably going to be a bit more challenging for you as a result.

First one to touch the wall wins!

I see no flaws with this logic. The law might, though.

I feel like I just watched this little kid have a miniature early-life crisis. "What's the point of this toy? Why am I struggling to fit the blocks in these holes? Does any of this really matter?"

I can see it! Looks just like a worm!

The only thing I would change is attaching it to other kid's foot so you don't have to do any work at all. Maybe in the next iteration.

Now that you mention it, why isn't Elsa doing her part to combat climate change? Kinda rude, to be honest.

Circling a tornado is definitely near the top of the list of things you should not do. Props to this kid for realizing that.

This is just pure genius. A little concerning, maybe, but definitely very smart.

OK, this one didn't really work, but it was a good idea all the same! And it is orange...

It starts with passive-aggressively peeled bananas. It ends with becoming the villain in a superhero movie. You better watch out.

You mean you don't carry Cheetos around with you everywhere you go? You're doing it wrong, my friend.

No one is getting anywhere close to the computer. However, she's going to have a tough time navigating the danger as soon as her computer turn is up.

A bath is nice. Wings are great. Combining the two? Next-level genius.

How my brother handcuffs himself to me while I sleep &says he won't take it off till I make him breakfast😒 #SmartKid http://t.co/hB6PDpqs
— Julieta Ramirez (@Julieta Ramirez)1346077119.0

That's one way to get breakfast. You could also try asking, but I like the cut of your jib, kid.

Those two are going to be best buds. Just hope they don't team up against you.

It didn't work this time, but it might work next time! Keep up the good work, Jackie!

What do you want the 4-year-old to do? Stop using their imagination? I don't think so!

This is why all kids should have access to power tools. What could possibly go wrong? Share this with someone who has kids!