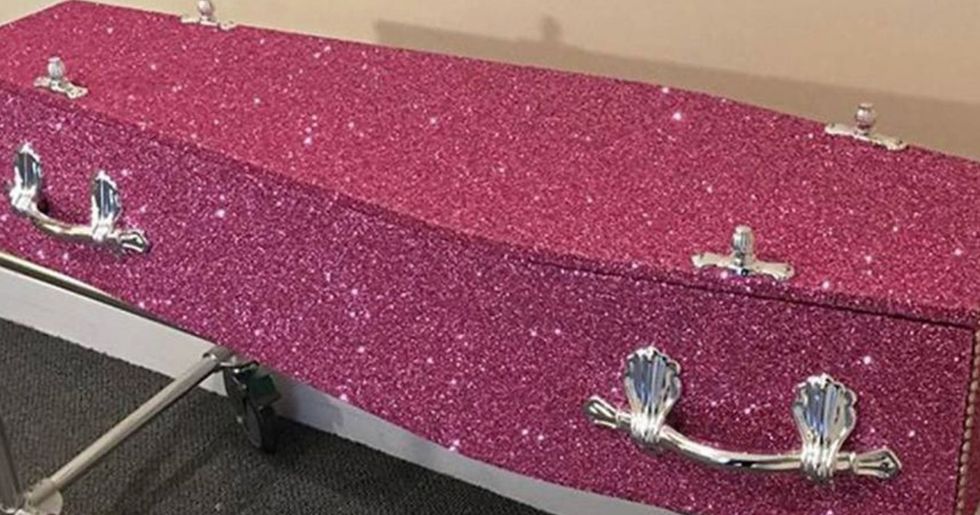 A fact most of us don't like to face is, that one day, we're all going to die. It's hardly a pleasant idea, is it? But one company had decided to add a fun twist to the classic funeral - and it might just be what you're looking for. Pink glitter coffins, anyone?

If you want your funeral to be ultimately fabulous, look no further. Bizarre as they may be, these glitter coffins are storming the internet - and once you see the extensive range, it's easy to understand why.

"In this world, nothing can be said to be certain, apart from death and taxes."

And although what happens afterward is a mystery...

The fact that we're all going to need a funeral at some point is a given.

So maybe it's something we should get a little prepared for?

Sure, it's a bit morbid to think about - but knowing how you want your funeral to go down could ensure it better reflects your life.

But they don't have to be. In fact, spicing up your funeral to make it more celebratory has become more and more popular.

And one slightly strange funeral trend?

Well, it involves the most festive material of all - glitter!

Because who wouldn't want a fun coffin?

If you live an over-the-top and fabulous life, why not continue the trend into the great beyond?

And what could be more fabulous than glitter?

These glitter-covered coffins have been taking the internet by storm - and it's not hard to see why.

Just look at them.

The Glitter Coffin Co. specializes in all things sparkly and death-related.

And the range is pretty special.

While we have a soft spot for the pink, each coffin can be customized based on personal needs. That's pretty great.

And they're really quite oddly beautiful.

"Our stunning coffins are a beautiful way to reflect and celebrate a person’s life," claims the company's website.

The range is pretty extensive.

They're made to order, with prices available on request.

But the company ships worldwide, so no one needs to be left out!

And if you don't plan on being buried?

via: The Glitter Coffin Company

Never fear! The company also makes boxes for ashes for those who opt to be cremated.

They don't just cater for humans, either.

via: The Glitter Coffin Company

They're kind of great - right?

And it seems the internet agrees, as people are pretty intrigued by this divisive product. "That'd be mine," writes one Twitter user. "I refuse to be buried any other way!" laughs another. Want an exclusive look at another extra as hell product? Scroll on for the most incredible Disney playhouse you've ever seen. Your childhood self will be green with envy.