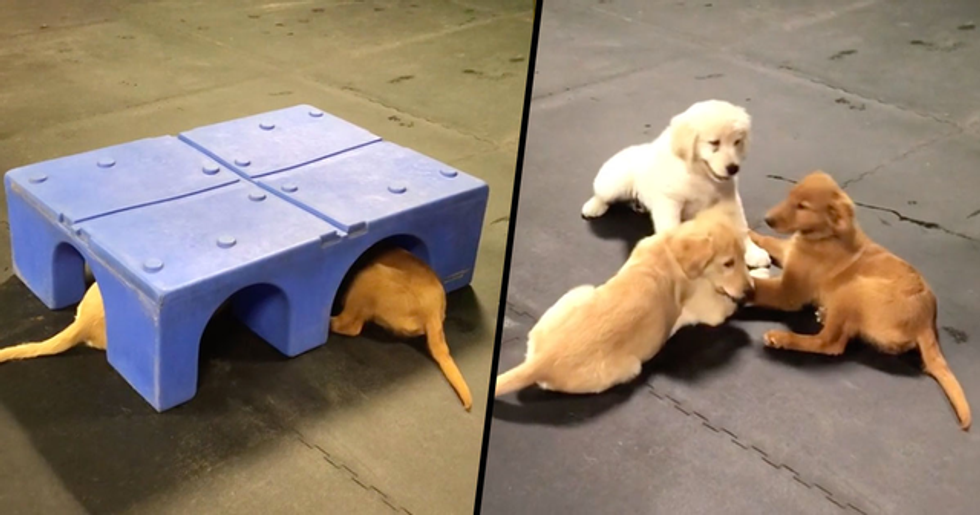 If there's one thing on earth that's cuter than a dog, it has to be a puppy, right? Basically a dog that's smaller and a little bit less coordinated - and sometimes more affectionate. What's not to love?

But 3 puppies have really captured the internet's attention this week - for a super cute reason. 3 golden retriever puppies were spotted having what looked like a top-secret meeting under a box. Once they were spotted, they quickly pretended nothing was going on. It's absolutely adorable - and just a little bit mysterious. What were they discussing under there?

If there's one universal truth...

It's that everyone loves dogs. And with very good reason.

There's a reason seemingly about fifty percent of the internet is just dogs!

They're cute, they're fluffy, they're heartwarming, they're loyal - and most importantly, they're hilarious!

But there might just be one thing that's cuter than a dog.

Imagine a dog, but even cuter and more hilarious. Ta-dah! You've got a puppy.

It has to be a golden retriever. Blonde dogs, hey? Could you imagine anything cuter?

And today, the internet has gone wild for a particular group of retriever pups.

And they have just one main question in mind. What on earth are these guys up to?

Especially since they seem to think they're pretty good at it - when they simply aren't.

And if the hiding place is a box?

Well, that's even better. Dogs, hey. What are they like?

But this was hiding with a difference.

Because, to the untrained eye, it seemed almost as if these dogs were ... having a secret meeting with one another?

And the internet is speculating.

What exactly was this cute group of pups discussing? Or, even scarier, planning ...?

In fact, there have been some theories.

We have to admit, it does look as though the dogs are undergoing some sort of ritual under there. Weird stuff - but very cute nonetheless.

But then they were rudely interrupted.

And once the box was lifted, the underneath was revealed.

Hey, if our meeting place was lifted right off of us, we'd probably have something to say, too.

But then, all too quickly...

The gang disperses, with a "nothing to see here" attitude.

And there's just one question ... What do you think was going on? Want another cute dog story? Scroll on for the giant dog who needed the help of mountain rescue, after getting way too tired on a hike. Oops.