These Grandparents Got Caught Bringing Their Loved Ones the Wackiest, Most Illegal Christmas Gift Ever | 22 Words 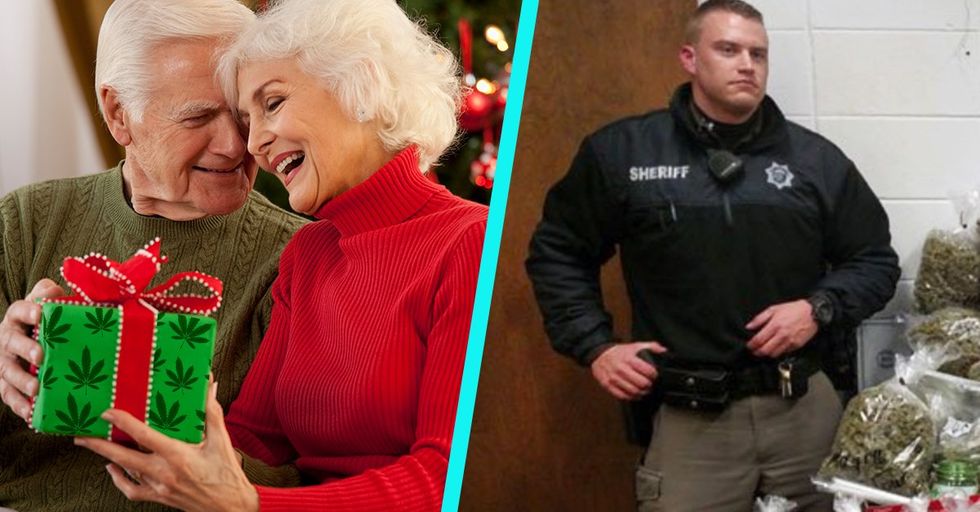 These Grandparents Got Caught Bringing Their Loved Ones the Wackiest, Most Illegal Christmas Gift Ever

What's the best thing your grandparents ever got you for Christmas? My grandfather once gave me $50, took me to Dylan's Candy Bar, and told me to go ape.

Alright, that was a lie.

Dylan's Candy Bar wasn't even open when I was a kid. Also, I never met my grandfather — although I'm told he was a hoot.

The point is, 'tis the season for giving. And that really means it's time for you to judge others based on how much — or how well — they give you gifts (don't pretend you don't either).
For grandparents, the bar is set even higher than the rest. After all, these are the progenitors of your progenitors – the forbearers of the DNA that has built your entire family line.
(Also, you know Memaw and Pop Pop have always said they loved you most, so it's time for them to put their money where their mouth is — or prove themselves shameless, shameful liars.)
Many grandparents at this point will resort to expensive gadgets or family heirlooms to keep their grandbabies in the (relative) opulence they are accustomed to.
One pair of grandparents in York County, Nebraska, however, took gift giving to another level this week. We might even say that they *cough* took it to another *cough* high.
On Tuesday, Sheriff's deputies pulled over a pickup truck when they noticed it veering over the central lane without using a turn signal.
Upon approaching the truck, officers noticed a pungent and (dare we say) decidedly skunky smell emerging from the car.
According to NPR, the car's elderly inhabitants, Patrick Jiron, 80, and Barbara Jiron, 83 said, "they were from northern California and were en route to Boston and Vermont."
When asked about the smell, Patrick admitted to having illegal substances and agreed to a search, which the officers then completed with the help of a canine unit.
Further investigation revealed "60 pounds of marijuana, as well as multiple containers of concentrated THC," which, as the elderly lawbreakers explained to Lt. Paul Vrbka, were for "Christmas presents." Those "Christmas presents" are worth a reported $300,000.

The Jirons are now facing "felony charges of possession of marijuana with the intent to deliver and no drug tax stamp." (Nebraska law requires marijuana dealers to purchase drug tax stamp from its Department of Revenue as evidence that the state's drug tax has been paid.)

As for their grandchildren, we assume they'll just have to get their holiday high another way. Might we suggest eggnog? We hear it's a perfectly respectable way to imbibe during the holidays.