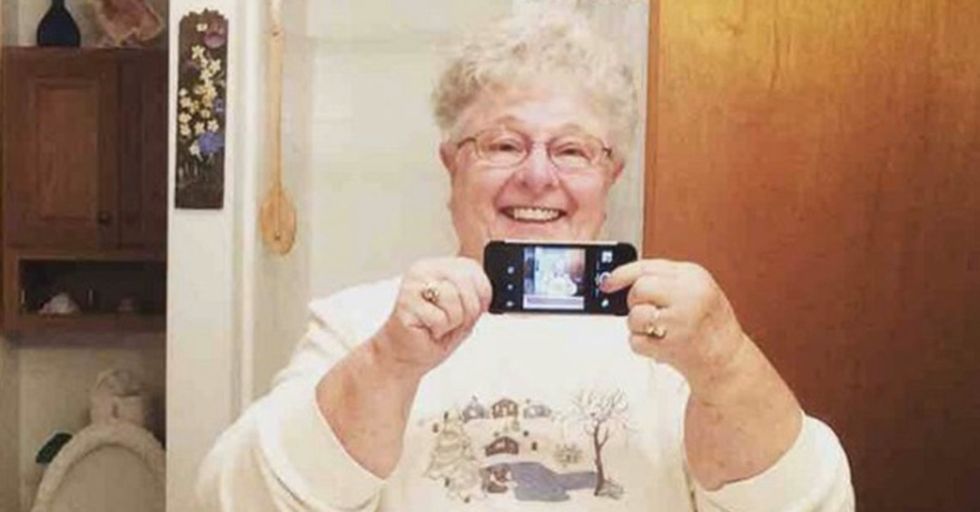 These Grandparents Tried Their Best, but — Bless Their Hearts — They Failed

Grandparents are too pure for this world and we do not deserve them. They have a level of innocence only matched by children. Somewhere in that middle part of life, most of us lose that child-like wonder, but these elderly folks still have it in bunches.

They tried, and that's all that really counts... right?

This adorable grandmother tried to take her very first selfie.

And it worked, mostly. She might've made it a little more complicated than it needed to be with the whole "mirror-ception" thing, but at least she got the picture. Also, of course she has one of those fuzzy toilet seat covers. Of course.

Grandparents and selfies go together like lime and coconut.

Whether they're taking them or framing them, they don't quite understand how it works. But that's part of the beauty of it all.

This spiritual grandmother thought she'd hung a fancy-looking cross on her wall.

Little did she know — it was an 8-bit Minecraft sword. Her grandson didn't have the heart to tell her though, so he just let her keep the illusion alive. How sweet.

She should hang out with this other grandmother, who also has some odd "religious" items.

And on the third day... HIS NAME WAS JOHN CENA! But seriously, how does this bracelet even exist? And where did she get it? Because I kind of want one.

Grandpa had one job and he tried...sort of?

I mean, at least he bothered to write his name on there.

Grandparents are the best gift givers though.

Or the worst depending on how you look at it. Maybe "pleasure tape" wasn't the best gift for a 12-year-old. Then again, it's probably a better gift than this next one.

Get ready for the cringe.

Oh man. That's bad. That is really bad. I wonder what the person who sold it to her was thinking. The best part is that you can see his grandma in the reflection.

Another gift probably unfit for grandchildren...but given to them anyway.

Usually, kids hate it when grandparents buy them clothing, but these might be the exception.

At least those grandmothers tried though, which is more than you can say for this grandparent.

But at least he was upfront. I applaud the honesty here.

This grandma is SAVAGE.

Grandparents and technology just don't get along. Wait until you see the next one (and if you have any Apple products, prepare yourself).

That is brutal! At least she has the screen cover on it. Still, I cringe at the thought of using an iPad as a cutting board. I hope she didn't put it in the dishwasher.

But this grandmother uses Facebook to reach out to Applebee's to try and find her nephew. Turns out he was at Chili's, which is an easy mistake to make.

Is this guy's grandmother actually Jigsaw in disguise?

Because eating cookies that may or may not have screws in them sounds like some weird plot out of the Saw franchise.

Other grandparents are just too pure for us.

Can you think of a more grandmotherly thing to do than sew a tiny shirt onto a shirtless model on a Hollister bag? Yeah. Didn't think so.

These adorable grandparents are too cute (and make me sad because I will never have a love like theirs).

I'm not crying. You're crying!