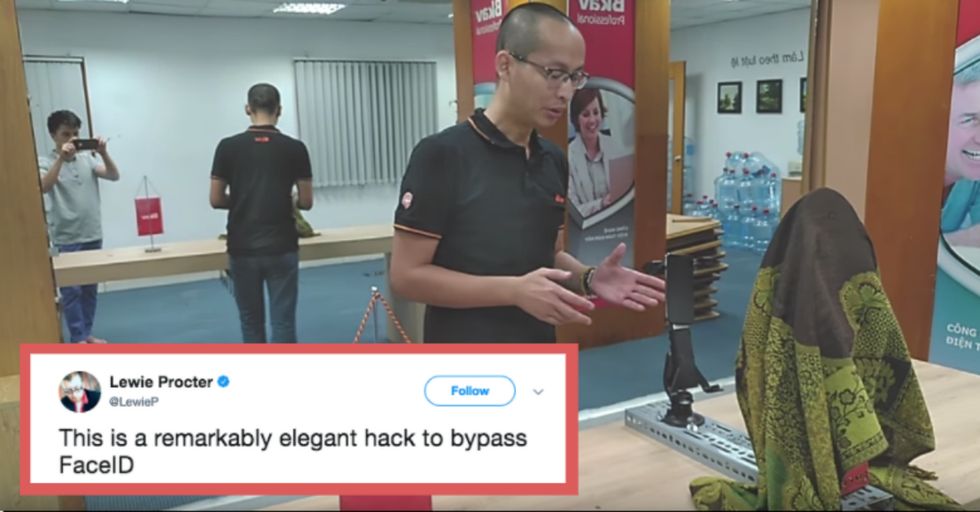 Is the iPhone X truly as secure as Apple is claiming it is? The Vietnamese security firm known as Bkav sure doesn't think so. They posted a video not even a week after the iPhone X's release which appears to show them hacking the phone's Face ID software. The technique they used is simple and cheap — under $150 if you want to create your own phone-hacking method.

There's a lot to like about the newest iPhone, but one of the most impressive aspects is Face ID.

When you buy an iPhone X, you're prompted to scan your face into the phone from all angles. Afterward, you're able to unlock the phone simply by glancing down at the screen. What could go wrong? A lot, apparently.

The video opens simply enough with a locked iPhone X on a stand. Across from it is a scarf that's been draped over something.

The iPhone X remains locked. Good news! Your scarves won't be able to hack into your phone.

But then, the Bkav employee takes the scarf off to reveal "an especially crafted mask."

The mask was created using 3D-printed plastic, a silicone nose, makeup, and simple paper cutouts. Nothing too high-tech. Nothing that your everyday hacker wouldn't have access to.

And it totally unlocked the phone.

In a matter of seconds, the man demonstrating the hack was able to open the phone. Impressive. But also kind of terrifying, right?

Here's a closer look at that mask:

For something that broke Face ID, that thing looks remarkably un-face-like, right? Bkav states several times on their website that their hacking video was meant as a proof of concept — they were simply trying to prove that it could be done. They claim that facial recognition is not a secure method of keeping your information private. Looks like it's back to the ol' passcode.