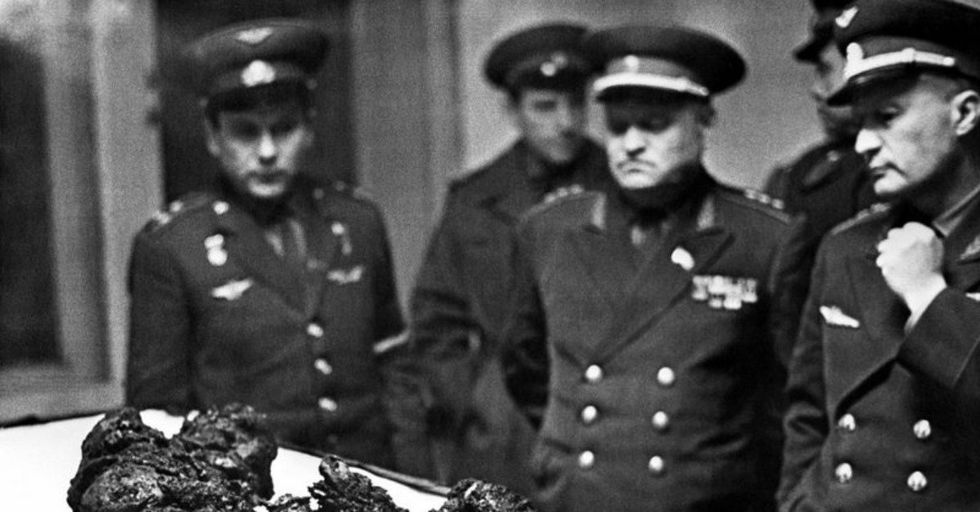 A picture is worth a thousand words. Some of those pictures' words are really spooky.

These thirteen photos may be chilling to look at, but they become endlessly more terrifying once you know the spine-tingling stories behind them.

The fear in the eyes of this girl is real. This picture was taken by Robert Ben Rhoades, a serial killer. Fourteen-year-old Regina Kay Walters, pictured here in the last known photograph taken of her, was one of several women Rhoades kidnapped and kept in an 18-wheeler with a torture chamber in the back. He cut off her hair and made her wear a black dress and heels before he killed her.

In 1921-1922, a devastating famine befell the people of Russia. Years of warfare combined with natural causes left millions of people without food. Before the Great Famine ended, at least five million Russians died of starvation and disease. Rumors of murder, cannibalism, and an underground human flesh trade became rampant during this time. The extent of cannibalism during this time is unknown, but historians have verified some accounts. Pictured here are suspected cannibals and the body parts that were found in their home.

Carl Tanzler was a German-born doctor at the United States Marine Hospital in Key West, Florida in the early 20th century. He's most well-known for the obsession he developed for a Cuban-American tuberculosis patient, Elena "Helen" Milagro de Hoyos. Tanzler, who considered de Hoyos a great beauty, tried to treat her disease to no avail. She died at her parents' home in 1931. Tanzler paid for her funeral and visited her mausoleum almost every night. But that wasn't enough. One night in April 1933, Tanzler snuck through the cemetery and removed de Hoyos' body from her mausoleum. He brought her home, kept her bones together with wire hangers, replaced her rotting flesh with waxed silk cloth and made a wig out of her hair. He stuffed her with rags to make sure she kept her form, and he dressed her in nice outfits. He also kept her body in his bed... ...for seven years. He would have kept her longer, but he was found out by de Hoyos' sister.

This may look like a goofy photo of two kids who encountered too much static, but the truth is much more sinister. The two McQuilken brothers, Michael (right, 18) and Sean, 12, had no idea that they were about to be struck by lightning when this photo was taken in 1975. They were climbing Moro Rock in California's Sequoia National Park and thought it was funny when their hair stood on end. Moments later, a bolt of lightning hit almost exactly where they stood. Sean was one of three people directly hit — he suffered third-degree burns to his back and elbows, but he was much luckier than another hiker, who died from the electric shock.

Yes, this is a high school class photo of a bunch of '90s kids. But if you look closely, in the top left corner, you'll see Eric Harris and Dylan Klebold wearing sunglasses and pointing their fingers like guns at the camera. This is the Columbine High School class of '99. Months after this photo was taken, Harris and Klebold would commit one of the most heinous and highly publicized school shootings in United States history.

via: First To Know

On November 13, 1985, without warning, the Nevado del Ruiz volcano erupted in Colombia, wiping out fourteen villages and killing 23,000 people. Photographer Frank Fournier snapped this chilling photo of thirteen-year-old Omayra Sanchez, who was trapped under the debris of her own home for sixty hours. Relief workers tried to free her, but they could not. Knowing she was going to die, she let herself be photographed and interviewed. On the third night of being stuck, Sanchez started to hallucinate. Her face swelled, her eyes turned dark red, and her hands became a ghostly white. Soon, she was gone, but her memory has lived on in this haunting photo ever since.

The particular horror of this photograph lies with the deceptive and violent nature of the photographer. Harvey Glatman, a serial killer in 1950s Los Angeles, posed as a professional photographer in order to lure aspiring models to his home. He'd hang around modeling agencies and contact women with "professional opportunities." Then, Glatman would lure them to his apartment where he raped, photographed, and strangled them. He was known as "The Lonely Hearts Killer" and "The Glamour Girl Slayer." It seems like something out of a movie, but it's the truth. This photo is of Judith Dull, one of his two known model victims.

On November 18, 1978, Jim Jones, the leader of the Peoples Temple, instructed the members of his Church living in a compound in Jonestown, Guyana to drink poisoned punch, thereby committing an act of "revolutionary suicide." That day, 918 people died. A third of them were children. This photo of the aftermath is more horrifying than you can imagine. The Jonestown Massacre was the single most deadly non-natural disaster in U.S. history until 9/11.

This photo is chilling not only because it depicts suicide, but also because of how famous it became. On May 1, 1947, twenty-three-year-old Evelyn McHale left a visit with her fiancé, boarded a train home to New York City, bought a ticket to the 86th-floor observation deck of the Empire State Building, took the elevator up, and jumped. She landed on a limousine parked on 34th Street. A student photographer, Robert C. Wiles, noticed the commotion from across the street, rushed to the scene, and snapped this photo. It appeared on a full-page in LIFE magazine — she became extremely well-known and is often referred to as "the most beautiful suicide." Andy Warhol used the photo in a piece he called, "Suicide: Fallen Body." This photo, and Evelyn McHale, made an indelible mark on our history.

Blanche Monnier was a French girl who was kept captive by her mother in a padlocked room for twenty-five years in the late 1800s. The Monnier family was an upper-middle class family in good social standing whose daughter tragically disappeared when she was twenty-five years old. Or so it was thought. Police discovered 49-year-old Blanche locked in a room in her own home, malnourished, naked, scared. That's when this haunting photo was taken. Eventually, the truth came out. Blanche had fallen in love with an older man who lived nearby and would not listen when her mother tried to forbid her from marrying him. So, her mother locked her in her room until she agreed to give up the relationship. She never gave up, so she was never set free.

Chris McCandless was a hiker and traveler whose story was made famous in Jon Krakauer's Into the Wild. This is the last photo taken of him while he was alive. McCandless's is the most famous case of "living off the grid." His journey has inspired many — people admire him for "his rejection of conformity and materialism in order to discover what was authentic and what was not, to test himself, to experience the raw throb of life without a safety net," according to Jon Krakauer in a follow-up article for The New Yorker. What killed Chris McCandless has been up for debate. But there is no doubt that his life, and even more so his death, gives us a chance to reflect on what's truly important.

This story is truly out of this world. In 1967, Russian astronauts and close friends, Vladimir Komarov and Yuri Gagarin, were assigned to the same mission. Both knew that the space ship was not safe to fly. Komarov knew he would die, but he wouldn't back out because Gagarin would be his replacement. Though there were clear doubts about the safety of the space capsule, nobody was willing to tell Leonid Brezhnev, the leader of the Soviet Union, and the driving force behind this mission. Still, Komarov wouldn't put his friend in harm's way. When the mission predictably failed, U.S. intelligence officials listened in, picking up Komarov's "cries of rage as he plunged to his death." At Komarov's funeral, pictured here, his remains were displayed in an open casket, a stark reminder of what the hubris of the Russian officials did to one of their own men.

The U.S. bombing of Hiroshima in 1945 is one of the most destructive and devastating attacks in history. The atomic bomb killed 70,000 people instantly, and thousands more died from radiation poisoning in the ensuing days, weeks, months, and years. The blast was so intense that shadows of incinerated human bodies were left on surfaces throughout the city. In this photo, a person with a walking stick is imprinted on the stairs.