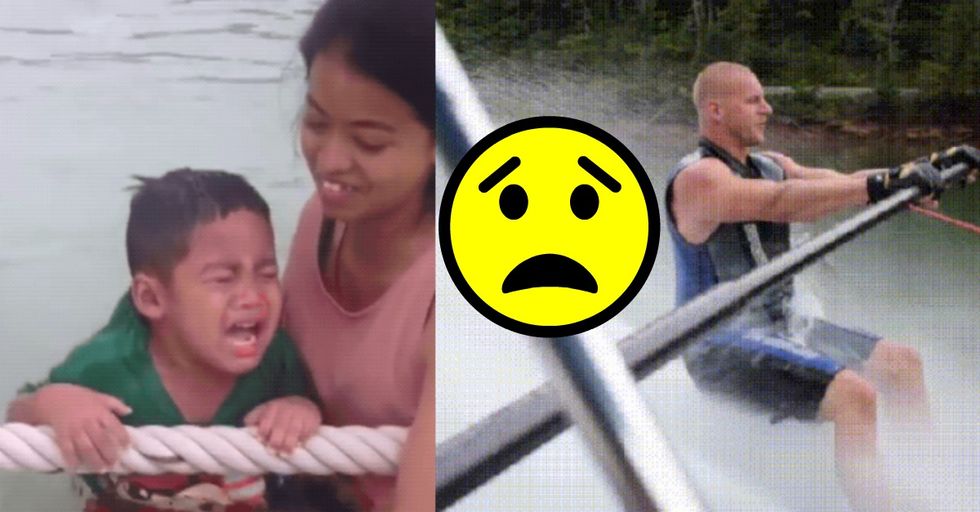 These Hilarious GIFs All End in a Perfect Plot Twist

Life doesn't always play out the way you think it will. Sometimes, you go into a situation fully expecting one thing to happen but are met with an entirely different outcome. If you're lucky, things will turn out much better than you expected: Instead of rain, you're met with sunshine. Instead of an angry boss, you get a promotion. But other times, the opposite happens: Instead of a check, you get a bill. Instead of a sweet, cuddly kitten, you're met with a rabid mother raccoon protecting her young. (Trust me, I've been there.)

If your life has been nothing but terrible surprises lately, the following 30 GIFs and photos will make you sigh with relief and realize that maybe the fate of the universe isn't so bad after all. But keep this in mind while scrolling: While it may seem like the most obvious outcome is inevitable, prepare to be surprised.

This video has as many twists and turns as a Hollywood blockbuster. It really does go to show where perseverance and believing in yourself can get you.

I have never been as slick as this kid, and I'm probably three times his age. But I will remember this the next time my friends are trying to push my head into a giant cake.

This clip is straight out of a Looney Tunes cartoon. And the way the tiger looks around in disbelief while the duck secretly sneaks away? Comedic gold!

And this, people, is why helmets exist. Especially because this is not the outcome of 99.9% of motorcycle accidents.

The look on his face when he realizes he won't have to sip the rest of his meals through a straw? Priceless.

This is probably the most Australian thing to have ever happened. Side note: Australia sounds like a horrifying place where nightmares are real. Have you SEEN the size of those spiders?!

I was honestly not expecting this to turn out so positive. In fact, I nearly had a heart attack while watching this. Let me just take a minute to recover...

This guy was clearly very pleased with his quick thinking and impressive reflexes. As he should be!

This could have ended very, very badly. In fact, you should probably just refrain from taking your kids to state fairs and carnivals. They're basically death traps.

Can we all just take a moment to applaud these majestic surf pups? And the fact that this near-collision turned out so perfectly is a total miracle. But seriously, where do I find this beach where dogs surfing is such a common occurrence?

This little guy should be thanking his lucky stars that he chose to invade an Olympic skier's path and not an amateur's. I'm guessing that scenario would have ended much differently.

I have to say, I was pretty transfixed by this video. It's almost hypnotizing, and the fact that it didn't result in a beer-covered kitchen is beyond astounding.

The look on this guy's face after he prevented his own decapitation says it all. Would I be as calm, cool and collected in this situation? I think not.

Oh, no! That kid's about to be mauled by a ferocious cheetah! Oh, wait... Now I just want to move to wherever this is where people have cheetahs as pets.

This woman literally owes her life to this man. Is mastering a stupid gymnastic move really worth potentially breaking your neck?

Could this video be any more heartwarming? Also, if anyone could find this guy's number for me that would be great.

I've probably watched this video at least 10 times at this point, and I still never see the ending coming. This man has to be some sort of wizard.

The person who opened their door saw this criminal fleeing from the authorities and took action. Well done! Or, maybe they just happened to be opening their door at that exact moment...

This thread should be on the New York Time's Best Seller list of thrillers. Who saw that ending coming?! Not me! But what a relief, huh?

You can see by the look on that poor little monkey's face that he had accepted his awful fate. But then, TWIST! Nature, for once, is beautiful instead of horrifying.

In the second angle, you can really see how narrowly this guy avoided certain death. But hey, he sure looked cool doing it!

This horrifying display of animal abuse

Oh, the humanity! Someone save this poor, defenseless little guy! How could anyone be so cruel?!

The amount of near-misses in this video makes it incredibly hard to watch. Thank goodness for brave folks like this heroic citizen who do the right thing no matter how inconvenient it may be!

This Mama pup had clearly had enough of this guy messing with her little one. I definitely didn't see this one coming.

This guy somehow managed to avoid a horribly painful death AND keep his man bun intact. That's gotta be some kind of world record.

STOP IT. You do NOT joke about Betty White like that. She's too precious to us. WE NEED HER.

At first, when you watch this video you think to yourself, "Why is that heartless camera person doing nothing to save this poor child?" And then, the reality of the situation hits you. Maybe the water was just really cold?

You know that when he went into that move he was fully expecting everything to topple and the game to be over. So really, this video is like a metaphor for life. Just when you think everything is about to come crashing down, your luck changes and things start going your way. Or maybe it's just a drunk guy trying to ruin a game of Jenga and failing.