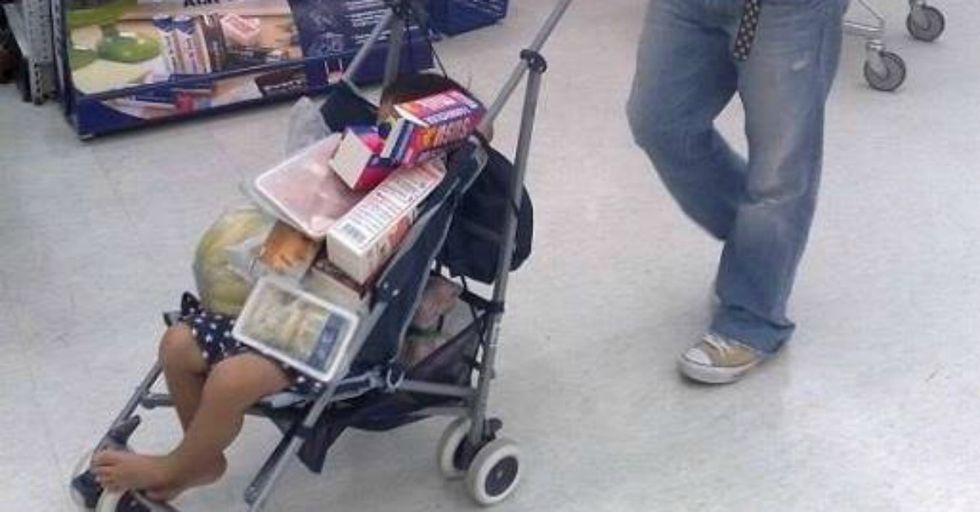 Parenting. None of us are ever really ready for it. It's a fly-by-the-seat-of-your-pants endeavor that books and TV shows can loosely describe, but until you're thrown into the rewards and the chaos, most of it remains a mystery. So we try our best to plan for the unknown.

But most of the time? We're pretty much just winging it.

Leave it to the internet to cultivate lengthy lists of parenting "fails." There are few things funnier than watching other parents struggle to figure out the ins and outs of raising tiny humans, and we love to laugh along.

That is, until it's our turn to bumble our way through.

Parenting is kind of like jumping into the deep end of a pool. Except, you have no idea how to swim.

There are lots of things in life you can prep for. When you're a teenager, there's someone there to guide you on the road before your driving test. Jumping out of a plane? No worries, there's a tandem instructor for that. But when it comes to being responsible for a brand new human and keeping him or her alive? Good luck and welcome to Thunderdome.

Initially, you'll have a parenting plan, but that's before you actually have kids.

In fact, everyone seems to be an expert on kids — until they have their own. It'll all be so easy. No sweets. Limited TV time. Potty-trained before their second birthday. The litany of things you'd have under control was far-reaching and comprehensive. Oh, and you were never going to be that parent with screaming kid in the middle of the store. Because your kids would never throw fits.

After your first baby arrives, the gameplan changes just a bit.

Usually the first moment you hold your bundle of joy in your arms, things shift. You start realizing that taking responsibility for a smaller version of yourself might be a little different than you had anticipated. It helps that babies are ridiculously cute, because the reality that this is an entirely separate person, with an entirely separate way of viewing life will dawn on you right away.

It only takes a few months of taking care of your own child to figure out that it's more about survival than a utopia where everything flows smoothly. Diaper changes and overnight feedings come together in a perfect storm of joy and sleepless nights. Only two things are certain. You love that little baby more than life itself. But you're also going to need a plan to survive until their first birthday. What's the sitter's number again?

Survival tends to turn into creativity. Which harbors interesting results.

Once a parent's weathered the initial shock of the newborn stage, things get pretty fun. And by "fun," we mean mom and dad try to navigate each day, using the most creative means possible. Some people call them parenting "hacks." Others say they're shortcuts. We simply say they're hilarious, and we're so glad the internet cobbles together tales of parental trial-and-error, so we don't have to feel alone.

Sometimes, getting through the grocery store is the only goal for the day.

Ask any parent about taking their kids shopping, and there's a good chance they'll stare blankly back and make unintelligible hand gestures. That's because it's somewhat of a juggling act. Remembering to buy bread, all while keeping a toddler from running away, is no easy feat. This picture makes us laugh, but it's also a great reminder that strollers can do double-duty when they need to.

Why work when you really don't have to? That's what parenting ingenuity is all about.

We like this parent's style. It says, "I'm here for ya, kid. I mean, I'm way over here, but I've got your back." Well, he's got his kid's swing, but close enough. This dad obviously loves his kiddo, but we totally sympathize with the need to sit down. After all, running after tiny people all day is tiring. No one can blame this dad for phoning it in all for the sake of a little relaxation.

A little trickery for a good cause isn't the worst thing in the world.

Getting kids to eat at all is often a challenge. Convincing kids to eat healthy food is a whole other ballgame. So what's a parent to do when they can't seem to sell their little ones on veggies and fruits? Get sneaky — and become a master of food disguise. This parent knows that a healthier drink choice is worth some soda camouflage.

We can only guess at this man and his son's backstory, but if we had to venture one, chances are it falls under some sort of William Tell scenario. Every parent is obligated to spend quality time with their little ones, but sometimes, even the best-laid plans don't pan out. Or send everyone to the ER. Whoops.

New babies bring a lot of happiness, but there are some less-than-exciting moments too.

The smiles and cuddles of brand-new babies are irresistible, but it's also true that infants aren't the best conversationalists yet, either. When parents get bored, they pass the time in all sorts of ways. When you're stuck at home, it's easy to keep yourself busy with paying bills, doing dishes, or balancing Cheerios on top of the sleeping baby's head.

Even on the best parenting days, you're still going to accidentally drop things.

Some weeks look better than others, but the most important thing is that parents get up and keep giving every day their best shot. Raising little ones is hard work, but as long as there's an abundance of humor served up on the side, it's still one of the best experiences on earth.