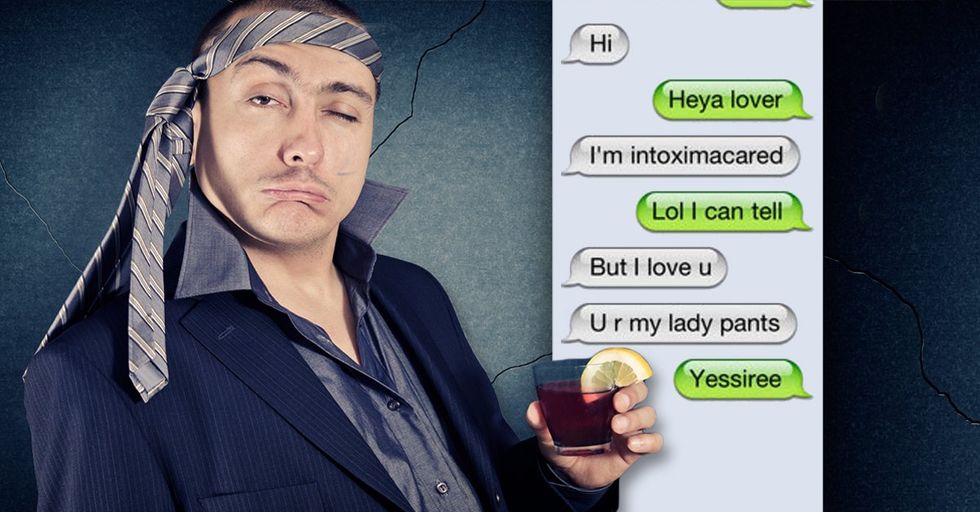 The 29 Funniest Drunk Texts EVER

It goes without saying that drinking and several activities shouldn't be combined, and one should always do it in a safe environment.

Don't drive, don't try to cook something that requires fire, and no matter how much you have to drink, don't do the Cupid Shuffle on top of the bar.

Oh, and you should probably avoid texting, unless you want to add extra regret to how crappy you're already feeling.

Plus, unlimited salad and breadsticks!

Drinking. It transforms you.

And after that he tried to lick his own elbow. Admit it...you just tried yourself.

It's that time of the month. You know, when you take inventory of the friends you should hang with when drinking.

You're my lady pants.

There's nothing worse than being intoximacared. Unless you're intoxicated and trying to text.

What a tease. The least they could have done was invite them anyway.

I bet he would have been singing a different tune if that had been a beer garden.

After 13 shots, it could be both. Truly cause and effect.

Now you're just making it worse. Then again, a cat is a cat?

Unfortunately, we know what you malean. Drink some ginger ale.

Then again, that escalated quickly. Hide your babies.

Might want to wash that coat. Hugs, not drugs.

Putting out an SOS

I think you need new friends. This one is a bit enabling.

He's developed super powers. Off to the Bat Cave!

Sure, blame it on autocorrect. Not the alcohols, drink, drunk.

Pencil that one in... ...as the weirdest compliment ever.

Forget kama sutra. Goosing and mallarding are the new trends.

Teeth are jewels, not tools! Maybe get an opener.

Hey, it did the job. Who knew clip-on earrings were making a comeback?

Truly cause and effect. Four a.m. you would agree.

At least someone is looking out for him. Buckle up, there buddy.

This whole situation is uncomfortable, and not just because the dude is crammed under her bed. Good luck with that.

Well, on the plus side, Grey Goose is at least quality vodka. If he's lucky, the hangover won't be quite so bad. Then again, he's screwed.

Care to taco 'bout it?

I want to know what would constitute a bad night for this guy. As if Taco Bell wasn't bad enough...

Better safe than sorry. There's no place like home...