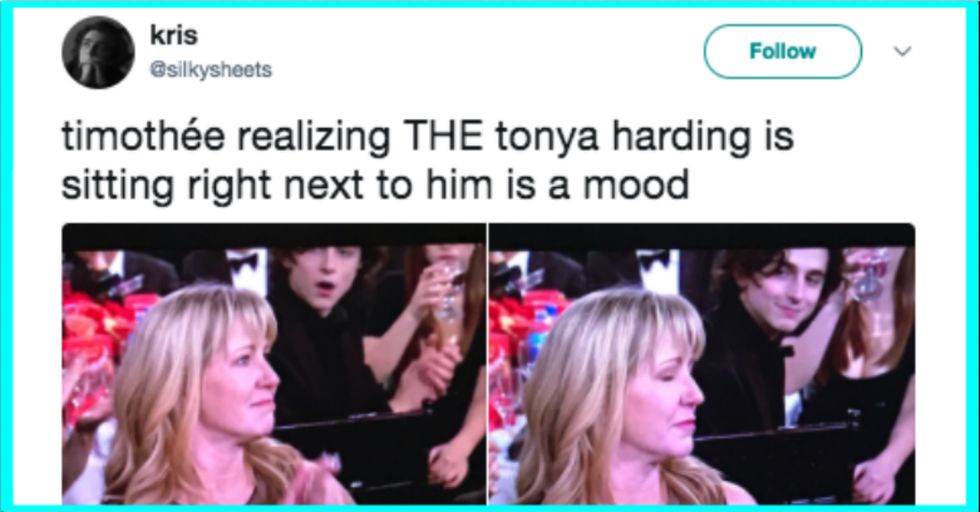 Woohoo! Golden Globes! Last night we were all witness to the 75th Golden Globe Awards and boy, was there ever a lot to witness.

The Globes were a particularly huge event this year for reasons that extend well beyond how great the films and TV shows of 2017 were. Nearly all of the actresses and actors who attended the event wore black as a symbol of protest against the sexual harassment that has been prevalent in several industries and has recently begun coming to light.

It was a night of epic speeches, historic wins, and patriarchy-smashing heroism.

It was also a night of many hilarious jokes. Here are the funniest tweets we found recapping one of the biggest nights in Hollywood!

Let's start things off with this epic journey of a kiss between Nicole Kidman and her husband Keith Urban:

This is the kind of kiss you have to pack a granola bar for. Not because it lasts forever or is especially taxing; it just takes a whiiiiiiiile to finally get there.

Of course she made Al Roker move so the camera would get her good side. She's Mariah flippin' Carey.

(It's a hilarious reference to her demand for tea on New Year's Eve which quickly became Twitter's first favorite thing of 2018. She's so extra and we love her so much for it.)

If you ever find yourself on Laura Dern's bad side, you have clearly messed up somewhere in life. You'd better hope you've got an Al Roker around to help you get back to her good side.

While presenting Oprah with the Cecil B. DeMille Award, Reese Witherspoon talked about what a privilege it was to share a makeup trailer with Oprah on the set of A Wrinkle in Time. Mindy Kaling couldn't help but chime in:

Kaling, new mother and another co-star of A Wrinkle in Time didn't make it into Witherspoon's presentation speech. And she made sure to let Witherspoon know she noticed. Witherspoon had the perfect response to Kaling's joking call-out:

I mean, yeah, Mindy Kaling is amazing and incredible... But Oprah is Oprah.

Here's Tom Hanks being Tom Hanks the only way he knows how:

The only thing that would make this even more Tom Hanks-y would be if he pulled a typewriter out from under the table and started typing up dad jokes.

Frances McDormand won the award for Best Actress in a Drama...and also all of our hearts when she shooed the camera person away from her.

Frances McDorman waving the cameraman away is a MOOD #GoldenGlobes https://t.co/hbK1NyqRaI
— Andrew (@Andrew)1515375013.0

Apparently whoever was operating the camera hasn't seen Three Billboards outside Ebbing, Missouri. If they had, they would be sure to never cross Frances McDormand. Ever.

Timothée Chalamet had the best reaction to realizing that the real Tonya Harding was sitting near him at the show:

Chalamet may not have brought home the award for Best Actor in a Drama, but he did win the Internet with this absolutely perfect reaction. So that's something.

The 75th Golden Globes had kind of a weird, time-warp-y element to them:

Congrats to all the folks behind The Handmaid's Tale for their many awards last night!

Seriously, congratulations. As for everyone else, let's just make sure season two doesn't take place in real life.

A lot has already been said about Oprah's epic speech. And anything that can't be said with words can be communicated by The Rock's face in this picture. Think this will affect his rumored presidential run?

I'd like to submit this as the funniest tweet about Alexandre Desplat that has ever been tweeted:

Any objections? No? The motion passes.

As the night began to wind down, Billy Eichner shared this beautiful Golden Globes story:

I am getting too drunk to tweet but please know that the first person I saw when I walked into the Golden Globes wa… https://t.co/N12puuMmA9
— billy eichner (@billy eichner)1515384113.0

We hope he also caught Messing's totally epic takedown of the E! network — while talking to an E! reporter.

Finally, the night came to an end and Ellen showed us all how to get comfy.

.@SethMeyers did a great job tonight. I take my hat off. I also take my slippers and housecoat off. It’s time for bed. #GoldenGlobes
— Ellen DeGeneres (@Ellen DeGeneres)1515386013.0

But not too comfy. After all, we've got the Oscars to look forward to now!