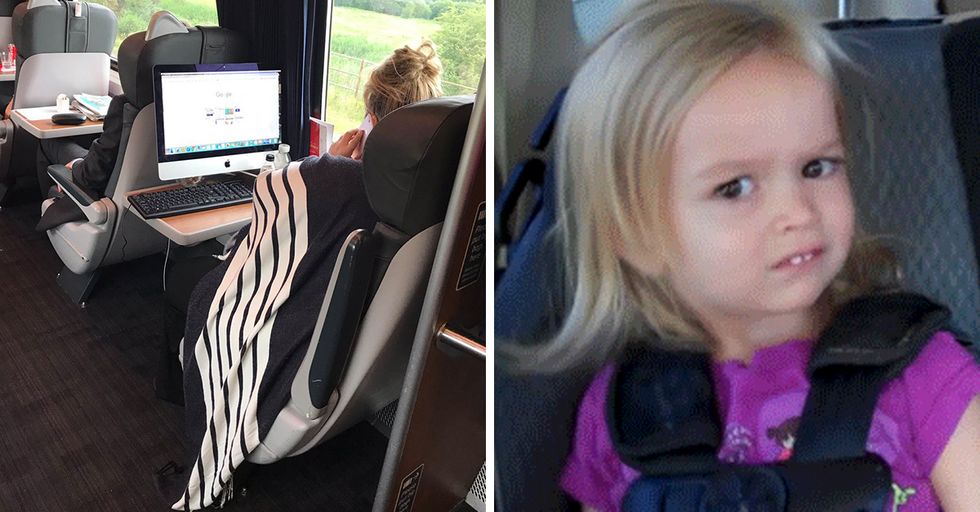 Public transportation is a whole other world, where pretty much anything goes. It doesn't matter if you're on a train, subway, or bus. In each situation, there are no rules.

I mean, sure, there might technically be a rule that you aren't allowed to eat on the bus– but people totally do. Any time you step onto a bus or other form of public transportation, you are saying goodbye to everything you can expect to encounter in the regular world and opening yourself up to a brand new idea of "normal."

Someone clipping their toenails? Seen it.

Someone eating a salad with chopsticks? Seen it.

Someone taking off their socks and switching them to the other foot while also playing the harmonica and singing "Take Me out to the Ballgame?" Haven't seen it, yet. But I feel like someone has.

Here are tweets that perfectly capture what it's like to take public transportation.

Well, that's something you don't see every day.

On the one hand, using a laptop would make so much more sense and this is pretty darn bonkers. On the other hand, I'm really impressed!

I'm assuming this person means someone brought a kazoo on the bus. But honestly, it wouldn't really surprise me that much if they had bought it there too.

an interesting combination of things that someone left on a bus seat https://t.co/LnJzSXl4ff
— plasticbagger (@plasticbagger)1495235964.0

I do not want to know what it is, though.

Having a good train conductor can make the drudge of a daily commute so much more bearable.

That being said, there's a fine line between "this guy is funny and quirky" and "this guy is really grinding my gears and I cannot wait to be off this train from Hell."

Must be Arthur Weasley.

There’s a guy on here this morning dressed like he’s from the Ministry of Magic trying to blend in with the Muggles.
— Train Diaries (@Train Diaries)1510644995.0

I've learned more about what constitutes as clothing from riding the bus than I have from anywhere else. You'd be surprised!

I personally think it's weird to eat a pomegranate like this even if you aren't on the F train. But maybe I'm the weird one.

I hope the boxes are all OK.

I wish I had seen this one in person.

I just now remembered that yesterday morning, a dude lost his balance when the train lurched and tried to play it off by dancing for 2 min
— Stacey Molski (@Stacey Molski)1493148710.0

Why is losing your balance on the bus so embarrassing? More importantly, how can I be as cool as this guy?

saw a girl on the subway holding her coffee hands-free by clipping a binder clip to it which she then held IN HER MOUTH. Honestly impressed
— julia reinstein 🚡 (@julia reinstein 🚡)1496790116.0

I don't know why you would ever need to do this, but this lady figured it out anyway. That's ingenuity for ya.

You know what? I'm gonna say it. You're the bus weirdo in this situation. Let the man craft his email in peace!

Look on the bright side. With all those people crammed on the train, you're less likely to lose your balance when it lurches!

Thanks! Now I have a brand new nightmare to think about.

Just heard someone on the tube comment that they can't believe all the stations are named after monopoly squares...
— Jack (@Jack)1496490883.0

Did you know they make giant versions of the Monopoly tokens, too? It's true! I have a few of the shoes.

Hey, why not? I think most busses could probably use a little extra bling.

Of course, this only makes sense if you are the only two people on the bus. Otherwise, you are also the bad guy.

This is the worst.

I have had this happen to me while I was reading with headphones on! Some people don't get it.

This woman was about to miss the train so she threw her bag to stop the doors from closing. Her bag is on the train. She is not.
— masc potatoes (@masc potatoes)1489703407.0

Well, that didn't quite go according to plan, did it? Better luck next time.

People who leave their AirDrop on for everyone to see are much braver than I will ever be. Then again, if it meant getting photos like this, I might give it a try.

gave up my bus seat for someone and she pulled out a bird in Tupperware https://t.co/RPCtOHJnZx
— Matt Buechele (@Matt Buechele)1495464975.0

I've never seen a bird in Tupperware on the bus, but I can say with 100 percent certainty that it would not surprise me even a little bit.

A guy on the train has just told his friend that someone who eats fish but not meat is called a Presbyterian.
— Alex Craven (@Alex Craven)1509968142.0

Maybe they're talking about eating fish on Friday for Lent. Do Presbyterians do Lent? Honestly, I can't really help this guy out anymore. He's just wrong.

Train pulled away from the station and a guy genuinely started commentating on it like a horse race 'and the 1843 from Bath is off' etc.
— Rob Pearson (@Rob Pearson)1509735204.0

Aand that's my cue to put on my headphones and start reading.

OK, this is the one thing on the list that would make my day. I hope she did different voices for all of the characters.

It sounds like this might be the bootleg version of Ratatouille. Or maybe it's the sequel! RataTWOille.

I know it seems innocuous but imagine how it would feel to wake up to an entire braid in your hair. That is nuts. That is not OK. It is hilarious, but it is also terrifying.

I have so many questions.

A guy on the bus just whipped out a hot dog two hours into the ride and I have never been more confused in my life
— Tory Rylance (@Tory Rylance)1509390369.0

Where has he been keeping it? Is it still warm? Why did he choose a hot dog for his travel snack? Is he going to share?

Aw, that poor guy! I hope you apologized to him. And then left him in peace, as everyone should do on the train.

That is a lot, though.

I'm with her. I'll do four floors, but five? Not a chance.

This is a man who clearly has his priorities straight. You would do well to emulate him.

A girl at my bus stop is eating strawberries out of her jacket and I'm so confused like who puts loose strawberries in a denim jacket
— keevs 🦕 (@keevs 🦕)1503410905.0

She must have had a Ziploc in her pocket. Right? Please say I'm right on this one. I can't stand any other explanation.

It's similar to a salad.

Which is weirder: pocket strawberries or dry lettuce? Leave your answer in the comments! And don't forget to share this with someone who will get a kick out of it.