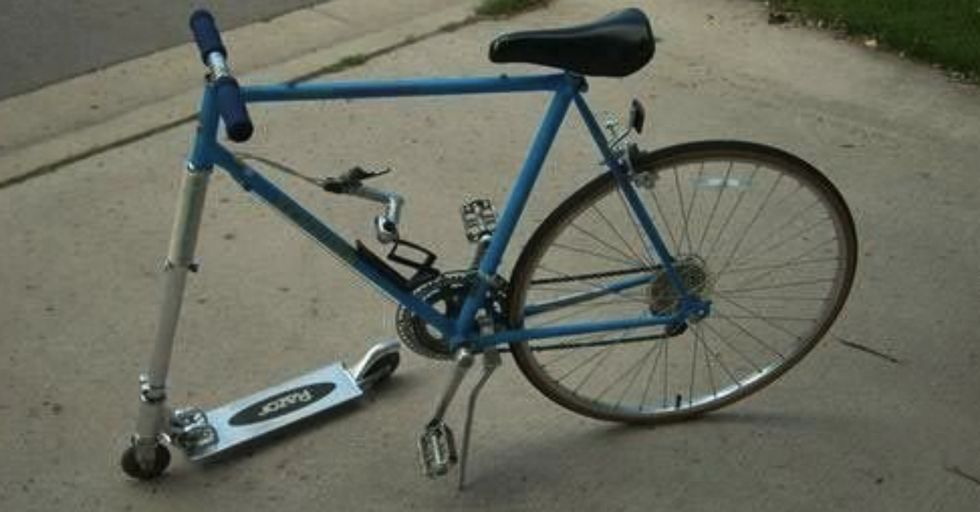 These are definitely not that. In fact, they're the most hilariously impractical "life hacks" we could find.

This woman decided her bathroom sink was not enough.

It was too ordinary, too trite. What it needed was flair — in other words, seashells. Lots and lots of seashells.

This genius tried to make the world's first scooter-cycle.

We can only imagine cruising down the street on this three-wheeled abomination, only to end up catapulting headfirst into the neighborhood garbage bin.

We have SOO many questions about this one...

When someone has a LOT of time on their hands and no sense of style.

Here we have a classic example of "but why?" The lamp looks like it used to be cute ... once upon a time. It might have even had aspirations of being glamorous. Then our handy hacker came and spackled it with twigs. Maybe they were going for rural chic?

This one is so impractical, we have no words.

Actually, we do. For all that time and effort, you could have literally gone to Walmart and bought a cotton candy maker. Or you could have just ordered one on Amazon. Also, if $40 dollars for a machine that repurposes sugar is too expensive for your blood, you could just as easily stroll down to the gas station and buy a bag of cotton candy. For a dollar.
Buy Now

This person clearly had a singular vision. We're just not sure what it is.

Is it an RV? An extension of the house, like a fully-covered porch? Is it modern art? A rumination on the transience-versus-permanence of modernity? Who knows. We definitely don't.

There are so many examples of deliberate and hilarious stupidity here, we don't even know where to begin.

The balloon phone-cover hack is actually cool, but we're not sure how long it would last. The ironed egg, however, is just plain stupid. They should have just used the sidewalk, like everyone else does when it's hot outside.

But why? That's the only question we have for this one.

Well, not the only one. 1. Why does your aunt randomly have boat seats — but no actual boat anywhere in sight? 2. Why did she decide to reupholster the seat if it's not actually being used in a boat? 3. Why did she choose such horrible fabric? 4. Why are we even bothering?

But you're wearing briefs, tho.

We don't care how cool or stylish you think this is — it's a pair of boxer briefs. There's no way it has enough support, and yes that whole iPod pocket may look useful, but that's only until it falls out the minute you start running or exercising. Which you actually can't, because, again, these are briefs.

It's a plastic bag.

It doesn't matter if you sling it over your shoulder or wear it like a fanny pack — it's a plastic bag, and those books are living on borrowed time.

There are so many ways to look cool. This is not one of them.

For all the time and effort you spent plastering on that faux sunroof (which, btw, will bubble off the minute there's actual sun), you could just, you know, buy a car. With a sunroof. Too expensive? Two words: Lyft. Uber.

This hack actually ends with a super-cute accessory.

Except, it's totally unnecessary. This genius hacker probably spent more money making this hack than they did buying the hamper itself. Whatever makes them happy, we guess?