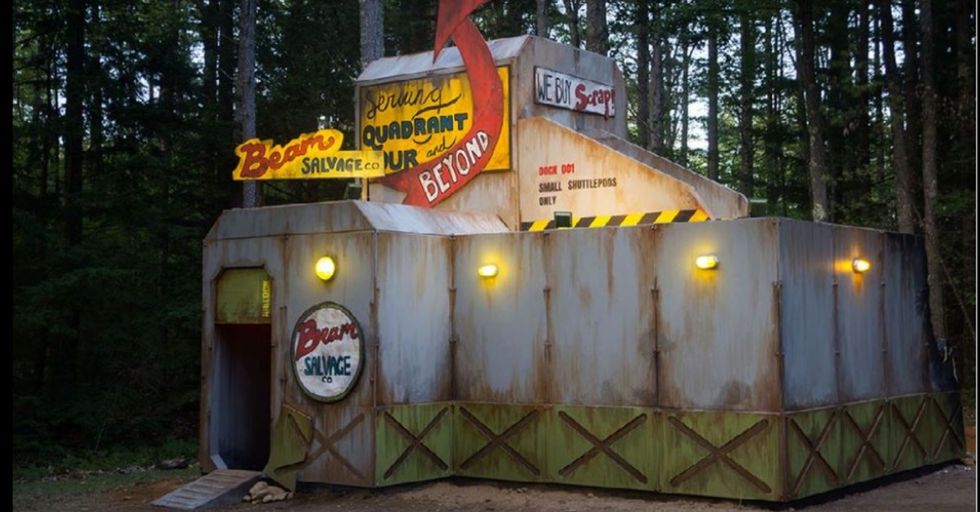 These Kids Built the Coolest, Most Realistic Space Station Model We've Ever Seen

The words "summer camp" likely conjure up images of canoes, archery, swim lessons, and mosquitoes. You probably don't think of welding, architectural design, and futuristic sci-fi space stations. Families with kids who are more interested in the latter set might feel like camp isn't the right fit.

But one camp in New Hampshire has thrown traditional camp activities to the wind in favor of design, building, and large collaborative projects. (They probably still have mosquitoes though.)

Beam Camp in Strafford, NH is a summer camp for kids ages 9 to 16.

Each session has campers working together on one large project. They do the work under the guidance of visiting artists, designers, builders, engineers, and other professionals who help bring these visions to life. The projects range in theme and scope, but all are part art installation, part science project, and part architectural engineering.

Kids get hands-on carpentry experience as they see their project through from conception to completion.

Beam's Facebook describes what they're all about: "At Beam kids learn to make things happen through fine and manual arts, technology and collaboration. They work together on the spectacular Beam Project while exploring innovative thinking, design and the creative process. Campers engage with our full-time and visiting staff of professional architects, videographers, builders, engineers, designers, and makers of all kinds."

This past summer's space station project looks like something out of a sci-fi movie set. (You can click through this album to see campers working on the details of the space station.)

"Salvage Station No 8" was designed by visiting artist Shing Yin Khor. According to Shing, the futuristic space station was originally intended as an art installation at Burning Man. For whatever reason, that didn't come to pass, and instead the vision was executed by a group of hardworking campers. The finished product is nothing short of amazing. No detail was too small. Using techniques ranging from welding to 3-D printing, every aspect of the final space station was intentional.

The finished structure has several rooms and is reminiscent of every sci-fi, space, and futuristic movie set you've ever seen. Click through to see the amazing details!

It is unclear whether the space station will be dismantled or was built to remain at the camp permanently.

What is certain is that the kids who worked on it learned some amazing practical skills in carpentry, building, and design. And they had the opportunity to be fully immersed in a sci-fi fantasy of epic proportions. How cool is this camp? Now, if they only could solve the mosquito problem...