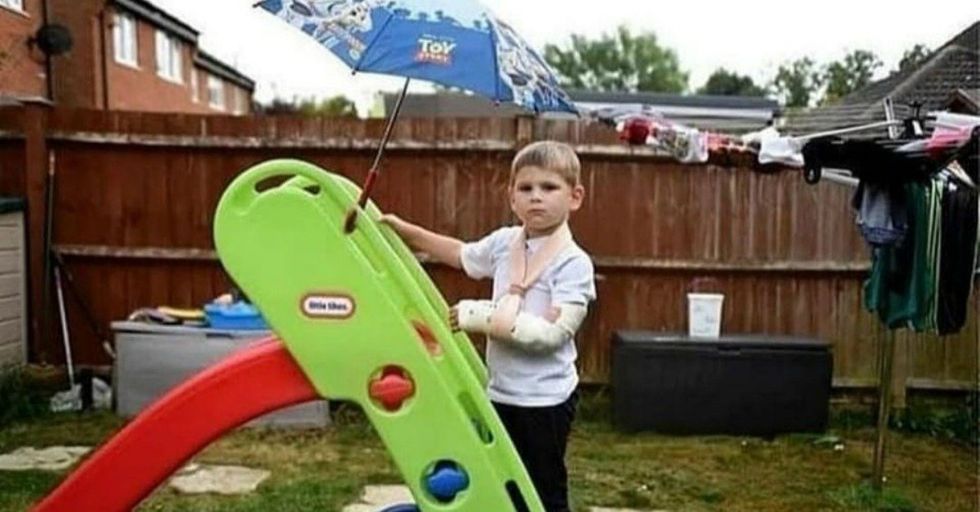 We all did dumb stuff when we were young. Heck, when I was a kid I was so certain that the food in my refrigerator came to life and had a massive party after I closed the door that I would spend all day long whipping it open in an effort to somehow catch them in the act. Needless to say, it never happened. Although those sticks of butter did look awfully suspicious...

If you're a parent, you've seen firsthand the kind of ridiculous stuff little ones will do when they don't know any better. (Actually, some of theme are probably old enough to know better.) These 30 examples of kids being hilariously clueless range from awe-inspiring to worrisome to downright upsetting. But all of them will produce the exact same reactions. People without kids will be horrified and happy about their childless situation, and seasoned parents will say "Yep. I know this all too well."

Ooof. That's gotta hurt. He seems to recover gracefully though, so maybe there's hope for him snagging a spot on the podium yet.

I mean, there are worse things he could aspire to be when he grows up. Like a professional DJ.

How would you ever look at your child again after a fiasco like this? Could your heart ever truly heal? I think not.

Don't worry, the kid was rescued shortly after this. But the shame of his terrible decision will last a lifetime.

Since a squirrel probably weighs roughly one pound, this might be a bit overboard, but it's still a pretty good guess for a three-year-old. And a hilarious unit of measurement.

Hey, maybe the kid noticed that you were running a little short on plates and utensils and wanted to help out. It's actually pretty thoughtful if you think about it.

What an insane coincidence! I wonder if that Titus got a time out for pouring Kool-Aid on his sister's pet hamster, too!

Seriously, when will the plague that is Fortnite stop being a thing? I'm too old to understand it but I'm constantly annoyed by it. And now it's trying to kill our children.

I'm honestly impressed that she didn't run screaming from the house. I'm not sure I'd have the strength to do the same.

While my sis brags at Thanksgiving about getting her PHD in quantitative microbiology I'm gonna be thinkin about th… https://t.co/u8iLkU834Z
— Katrina Dahlgren (@Katrina Dahlgren)1510681934.0

Ah, siblings. They never forget embarrassing blunders like this, and they'll wait until the most opportune moment to throw them back in your face.

This kid's future is so bright that he'll have to wear shades. Literally, because he just blinded himself.

"Honey, I just gave you some. No, you can't have any more." I'm totally remembering this one for when my own greedy kids are wining about having a drink of my soda.

This result of a lack of supervision

This kid must REALLY love cornbread. Here's a great example of a situation that they don't tell you how to deal with in parenting books.

I guess, technically, she's not wrong. A goose is a poor excuse for a dog.

Haven't we all been in this exact situation after a night of too much UV Blue? It's making me nauseous just thinking about it...

What a responsible young man. Next, he'll be putting his baby sister in the freezer "for safe keeping."

This is a disaster waiting to happen. And the fact that someone allowed him to do this long enough to take a picture is troubling.

Just look at the deep, deep regret in her eyes. I'm guessing she'll never do this again. Until she forgets about this traumatic experience and shoves it on her head a week later.

Seriously, kid? The smugness on his face is almost too much to handle.

If you ask me, this was 100% staged and this kid is just looking for a handout. But it was caught on video, which could make it hard to dispute in court.

This job for Clorox

I don't know what happened here, but it doesn't look good. And I'm pretty grateful that I don't have to clean it up.

This is just not right.

This really makes me feel comfortable getting behind the wheel of a car. In fact, I may never drive again. So kids have ruined THAT for me, too.

That's not how that works. In fact, can we all just stop with the asinine "challenges" that are so popular these days? They almost always lead to things like this.

Bite my phone once, shame on you. Bite my phone twice, well this Aunt should really never let her niece touch her phone again.

Is there anyone among us who can honestly say they wouldn't do the exact same thing after finding a pot of gold?! It sums up that experience perfectly.

Poor kid. It was a valiant effort, but alas, his dreams of growing up to become a world-famous soccer player will probably not pan out.

It hurt my neck just to watch this video. If the girl on the bottom doesn't have a lifetime of physical therapy ahead of her I'll be legitimately surprised.

This most unsatisfying Popsicle

This video is like a metaphor for life. Just when you think you're about to finally get a taste of something sweet, cool and refreshing, you're met with cold, hard reality instead.