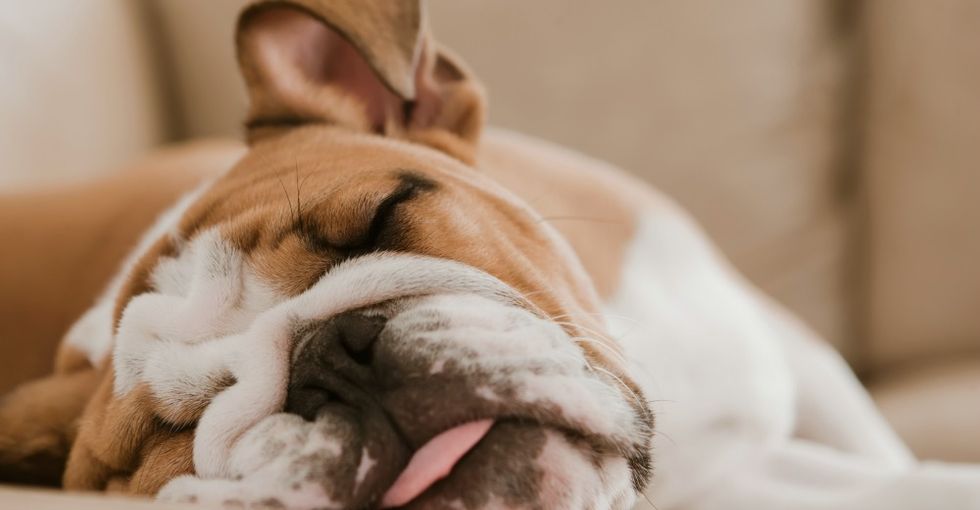 Owning a dog requires a lot of work. You have to feed them, provide the right amount of exercise, make sure that they're mentally stimulated, take them to the vet as often as you're supposed to, and, when it comes to puppies, train them to use the bathroom outdoors instead of inside your house. (Not to mention the amount of time spent cleaning up the messes made inside your house in the process.)

It's important to find a breed that matches up with your personality. When my husband and I adopted our dog 5-year-old Australian Cattle Dog, we picked her because of how adorable and social she was without considering her insanely hyperactive personality. Sure, we love her, but she's exhausting.

If going on 2-hour walks and running several miles per day with your dog isn't really your style, the following 30 breeds are right up your alley.

Looking for a pup that's all about snuggling? Consider the Cavalier King Charles Spaniel. A few quick walks per day are all they need, and they're notoriously gentle.

Who doesn't love an adorable wiener dog?! Sure, these pups enjoy chasing a ball inside or playing with toys, but their main priorities are eating and napping. So, basically, the Dachshund is my spirit animal.

Didn't think big dogs could be considered "lap" dogs? Allow the Bullmastiff to change your mind. Known as "gentle giants", these 100-pound pups are basically big softies who are surprisingly lazy.

These smart, curly-haired dogs are pick up obedience training quickly and aim to please their owners. They're also all about taking long naps on the couch. Can you blame them?

Yorkshire Terriers are known for their tiny bodies and big attitudes. They're extremely loyal to their owners, and although they can be pretty active around the house, it's usually short-lived. Those short bursts of energy only require a few quick walks for them to be completely satisfied.

Japanese Chins were bred to be lap dogs, so if your idea of a perfect Saturday night is lounging on the couch with your pooch in your lap, this is the dog for you. They should be watched around small children, however.

These sociable cuties love to be around people and are extremely easy to train. Their goofy personalities provide neverending entertainment, and since they're so adaptable to different living situations, they make perfect apartment dogs.

How's this for lazy: Pekingese pups actually hate exercise, so if you do, too, you're a match made in heaven. They're also not great with children, so a kid-free household would be best.

Live in a cramped space but still want a furry sidekick? The Maltese is laid-back, mild-tempered, and take to training well. Plus, how could you resist that face?!

These beautiful dogs are great with kids and other household pets and prefer to spend their days parked on the couch or soaking up a sunbeam rather than running around outside.

These little firecrackers are seriously small, and while they tend to be a bit feisty (another breed that's not a great fit with small children since they can be nippy), they're also totally content curled up on the couch taking a siesta.

A short walk or a few minutes of playtime indoors is all the Shih Tzu needs to be completely happy. They're also great travelers since they love people and won't put up a fuss if they're stuck in a confined space for long periods of time.

Pugs are the quintessential so-ugly-they're-cute dogs that are great city-dwellers. But watch out for these troublemakers, since they're known to be mischevious and tend to get into stuff around the house when left alone for too long.

If you're looking for the perfect family pup, consider a Bernese Mountain Dog. These loyal companions are extremely gentle and easy-going when it comes to cuddling and children's roughhousing. Their naturally calm demeanor means you're not constantly having to chase after them.

These brainiacs love to curl up in your lap for a nap and prefer short walks around the block over excessive exercise. They can be prone to barking, though, and can be a bit timid when meeting unknown people and animals.

Basset Hounds are known for their sleepy demeanors and gentle personalities, so if you'd describe yourself as "lazy", a Bassset would be your ideal match. The only downside? They can be pretty slobbery, so if drool isn't your thing, avoid this breed.

I know what you're thinking: Greyhounds are built to run! Wouldn't they go crazy in a non-active household? This graceful breed is actually not made for endurance, and just need a quick sprint every now and then. Otherwise, they're extremely low-key dogs. Who knew?

This delicious-sounding dog breed loves giving kisses and is usually a straight-A student when it comes to obedience classes. Most Bolognese pups get along well with children and other pets, as long as they're not being continuously provoked.

Looking for an easy-going sidekick who's always down for a calm and relaxing good time? You may not have heard of the Tibetan Terrier, but it might just be your match made in heaven.

You know that one friend who gets along with everyone and is your go-to when you're looking for a low-key night of fun? Coton de Tulear is the dog version of that friend. They do need a few long, slow walks in order to be content, but otherwise, they spend most of their time sleeping.

The Clumber Spaniel is a rare breed, so if you have the fortune of finding one of the only 200 dogs registered in the US, snatch one up while you have the chance! These sweet-natured pooches are extremely mellow and not-at-all athletic.

Everyone knows a big, goofy St. Bernard when they see one. And while they're known to be diligent watchdogs, they're also 100% satisfied with lounging around the house all day. Think of them as the most adorable security system ever.

Sure, Chinese Crested pups are a bit bizarre-looking. They're basically hairless except for some long fur on their tails, feet, and head. But there's no denying their somewhat strange cuteness and sweet temperament. Their small size and relaxed attitude make them great for apartment living.

I may or may not have a slight obsession with Corgis. There's something about their short little legs and perpetually smiling faces that just makes them irresistible. But did you know that they're also extremely smart, great with little kids, easy to train, and only require a few short walks during the day? No wonder the Queen loves them!

While these little guys can sometimes be aggressive, if you give them the correct training at an early age, they're as sweet as pie and prefer to stay at your side at all times.

Because Chow Chows tend to become overheated easily, excessive exercise is actually discouraged in order to keep them healthy. So if you're looking for an excuse to become even lazier, get yourself a Chow.

With long, crimped hair and even-tempered personalities, Lhasa Apsos are great for people who prefer to kick back and relax on the weekends instead of going for 5-mile hikes. This breed can also be nippy, so they shouldn't be allowed around small children without adult supervision.

French Bulldogs tend to have breathing problems that make long walks difficult, so it's best to stick with short, less intense walks when it comes to this adorable and pint-sized breed.

Quirky and affectionate, the Pomeranian is another typical lap dog that wants nothing more than to be cuddled up on top of you. They can, however, be protective and assertive, and often feel the need to bark and anyone that they deem a danger to their owners.

Patient and sweet, English Bulldogs are notoriously wrinkly faced and adorably lazy. They have the same breaking issues as French Bulldogs and Pugs, which makes long walks difficult. Their main priorities in life are eating as much delicious food as possible and getting in their daily 12-hour nap. These pups know what's most important in life.