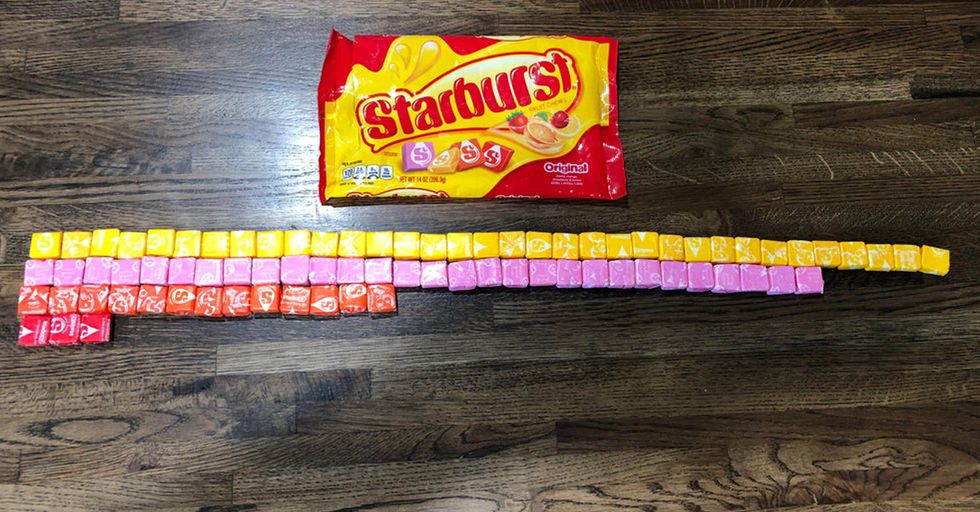 These Mildly Infuriating Things Will Really Get Under Your Skin

The world is littered with small things that drive people crazy. And, the internet is here to listen and commiserate with those small annoyances that feel like the worst.

Reddit, Instagram, and even Anna Kendrick's Twitter account are full of mildly infuriating anecdotes: the little plastic price tags, poorly cut foods, misaligned wall hangings. All of those things we notice and try to ignore without pulling our hair out.

Keep scrolling to see all of the things that drive us all a little mad some times.

Sometimes you need a pocket, and it's not there.

Anna Kendrick's twitter is super funny. And, she's 100% right, here. Pants without pockets should be #cancelled.

Cutting a pizza is no time for your "art."

It looks like this person took a hacksaw to their delivery. Friendships have ended over things less serious than inequitable sharing of pizza.

This is not socialism.

Socialism is not about lowering half of the students grade to teach some asinine point. Bernie Sanders would never.

One bad rip can ruin the granola bar experience.

When this happens from mildlyinfuriating

Then you try to pull on the tiniest sliver of the seam to open it. At a certain point, opening packaging becomes a battle of wills.

How much time would it take to line up the utility hole covers?

Thought this was a nice neighborhood... from mildlyinfuriating

This one is oh so common. It's so tempting to just rotate the cover so it all lines up. It's so, so close to working and yet just far enough to be infuriating.

This parking job is too frustrating.

As a lifelong Californian, parking and car-related infuriations irk me like nothing else. Even English ones. But, he gets points for creativity.

How does this even happen? Did they have to buy a replacement door from a different manufacturer? did the installer have beef with the school? What is happening?

This car is not super. This car is a driving public service announcement for using a ruler and someone to help you.

This isn't so much infuriating as it is rude.

The way I found these strawberries in my refrigerator from mildlyinfuriating

Whomever this person lives with has a personal vendetta against them. Who puts a strawberry stub back into the bag unless to foment anger and contempt?

Ok, this was a rock and hard place situation.

When the building features off-center adornments, where is one supposed to put their desert/hipster cool skull? I think they did the best with what they had.

The dog is cute; the mismatched concrete sucks.

It seems like the builders were just like, "Eh, good enough; I'm tired." A lot of mildly infuriating behavior comes down to phoning it in.

Capri Sun has always been the most annoying thing to open.

These stairs at my friend's house from mildlyinfuriating

I half expect to see creepy twins standing at the foot of these infuriating and scary basement stairs.

The irony here should be studied at a lower undergraduate level.

Someone thought they were clever: "you're the one responsible for your life," with an egregious misspelling.

Why is a 4 dollar drink special 5 dollars?! from mildlyinfuriating

This is so infuriating! This person should sue for false advertising. Millions of dollars in punitive infuriation.

These plates are kind of funny, tbh.

My mom got these new plates and uses them regularly for meals! from mildlyinfuriating

There are certain objects that exist solely for the initial chuckle. Like, oh, yeah, I get it, ha. One should never buy chuckle objects. One laughs at the chuckle objects at Urban but then buys the rose water facial spray on sale.

Did this guy not get it? Was he pranking his Instagram followers? Maybe he knows he's not an angel and doesn't want to lie?

Guy on my block just mows his lawn right into the roadway. from mildlyinfuriating

The bar owners here know exactly what they're doing.

It's so disingenuous, it's almost funny. Also, free wifi and cold beer are independently great! Lean into your strengths!

No one likes yellow.

Can anyone guess my least favorite flavor of Starburst? from mildlyinfuriating

Even if you say you like yellow, you're just trying to seem cool. Why do they even make yellow? It's not sour enough to be considered tart, but it doesn't have the same sweet appeal as red. This bag assortment is aggressive.

Why take up one handicap spot, when you can take up two? from mildlyinfuriating

When you buy a sports car like this, does it come with a manual about how to park in the most douchey way possible? If you're that worried about door dings, you shouldn't have the car.

By weight, this is more pit than fruit.

Avocadoes are literally the best. They're so great that an entire generation is spending all of their money on it. (just kidding, articles like that are so infuriating as well). But no one buys the avocado for the pit.

Flakiness is the bane of a good relationship.

rescheduling on me more than once is a guarantee you will become a fictional character in my life i think of fondly
— Aparna Nancherla (@Aparna Nancherla)1559236497.0

Every time you bail a second time on someone, you're saying, "you just lost the people's choice awards to something better again!"

Bananas already have their own packaging.

There are so many things that could use protective packaging. Basically any fruit with edible skin. The beauty of bananas is that you can throw one in your bag without worrying about getting it dirty. But, why not use more plastic! The world's ending by 2050 anyway; let's party!

It's kind of cute, a red peppermint with its friends. This could be one of those elementary school motivational posters: Be Unique!

This one seems fake.

Did they cut the bread first and then melt the cheese? Did they make the sandwich, cut it, and then rotate it to annoy their patron? How do you eat this?

What kind of monster cuts a round cake like this?

If someone did this at my birthday, it would be the last birthday they were invited to.

This little tiny nub of plastic causes so much consternation.

That feeling when you're out doing your thing but there's this nagging not-quite-itch coming from your clothes and there's nothing you can do about it until you take it off and find scissors. So annoying.

Mourning the loss of Biscuit with Ariana Grande tickets from mildlyinfuriating

There are a ton of ways to guilt someone into giving you tickets to a show. Saying that your pet rodent was a huge fan has got to be the biggest stretch.

When life's small frustrations get you down, just breathe.

To be annoyed is to be human. To deal with annoyances gracefully is divine.