So wrong. While the officers did not deny sex happened, they both state it was consensual. | 22 Words 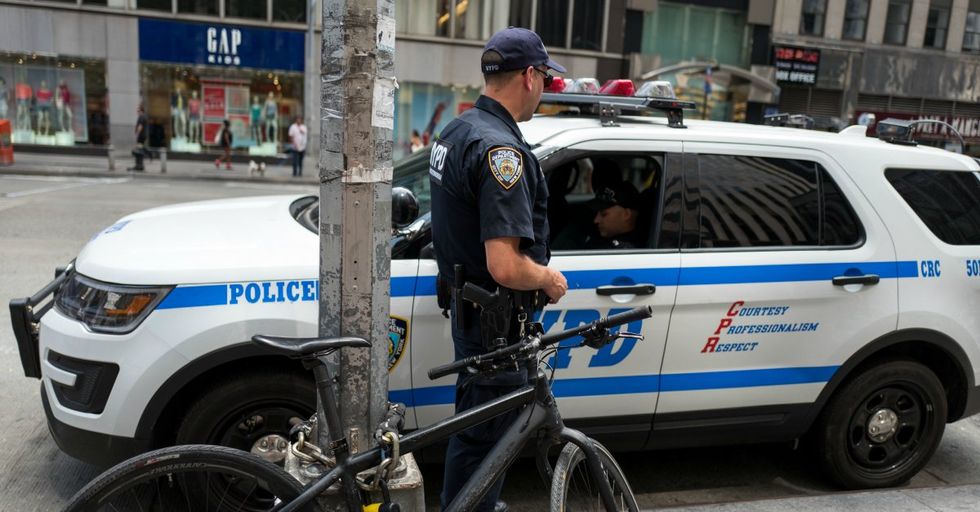 On September 15, 18-year-old Anna Chambers (a pseudonym) and two male friends were in a car when they were pulled over by officers Richard Hall and Eddie Martins of the Brooklyn South narcotics squad.

What happened next will horrify you.

After finding prescription pills on the trio, the officers made Chambers remove her bra to ensure she "wasn't hiding anything."

They then let her friends go, but cuffed her and drove her to a nearby Chipotle parking lot, where they threatened to take her to station if she didn't have oral sex with the both of them. Once she complied, one of the officers raped her.

"She was handcuffed the whole time the rape occurred," Michael David, her lawyer stated.

As if this isn't bad enough, the cops drove the disoriented teen around for 20 minutes before dropping her on the curb and then driving right back to the precinct.

Chambers managed to find her way to one of her male friend's house. He drove her home to her mother, who immediately took her to the hospital.

The rape kit came back positive for both cop's DNA. At this point, you'd think this would be an open and shut case, right?

So wrong. While the officers did not deny sex happened, they both state it was consensual.

Let that sink in for a minute. A teenaged girl, coerced into oral sex with TWO COPS under threat of arrest and then raped. Consensual.  But it gets even worse.

The officers then pointed to her "provocative" social media snaps after she was raped as proof that she wasn't the victim she claimed to be.

“This behavior is unprecedented for a depressed victim of a vicious rape," the officers' legal team, John Arlia and Mark Bederow reportedly wrote about Chamber's social media habits. Because all survivors react exactly how you expect them to react. But that wasn't the end of it...

As a reminder, rape victims, like all survivors of trauma, go through different cycles.

There's shock, where the "victim may suffer from acute anxiety, fear, and guilt, and observable reactions can vary from hysteria to numbness." Another phase is denial, where the victim may seek to "forget the whole thing" and "attempt to return to [his or] her daily routine." There's also integration, the phase during which "many rape victims realize that the attack has played a more important role in their lives than they had realized."

We highlight all this to say that the cops' excuses are the worst, most reprehensible form of victim blaming imaginable.

As a spokesperson for the Brooklyn District Attorney's office stated, “Without commenting on this ongoing investigation, defense counsel’s characterization of how a rape victim should behave is inaccurate, inappropriate, and demeaning." Indeed.

People aren't standing aside for this shameful victim blaming either.

People have gathered on social media to protest the officers' characterization of Chambers and to make sure it's understood this sort of thing is no longer acceptable.

The officers are currently being investigated and both they and their sergeant have been placed on "modified assignment."

Their badges and guns have also been confiscated. Councilman Mark Treyger commented on the case via a medium post. “Regardless of legal outcomes, we know that it is wrong for two police officers to use their positions of authority to engage in sexual activity with a teenager." "The abuse of power exercised by these two detectives rattles the foundations of positive police-community relations that the law enforcement community has been working to build."